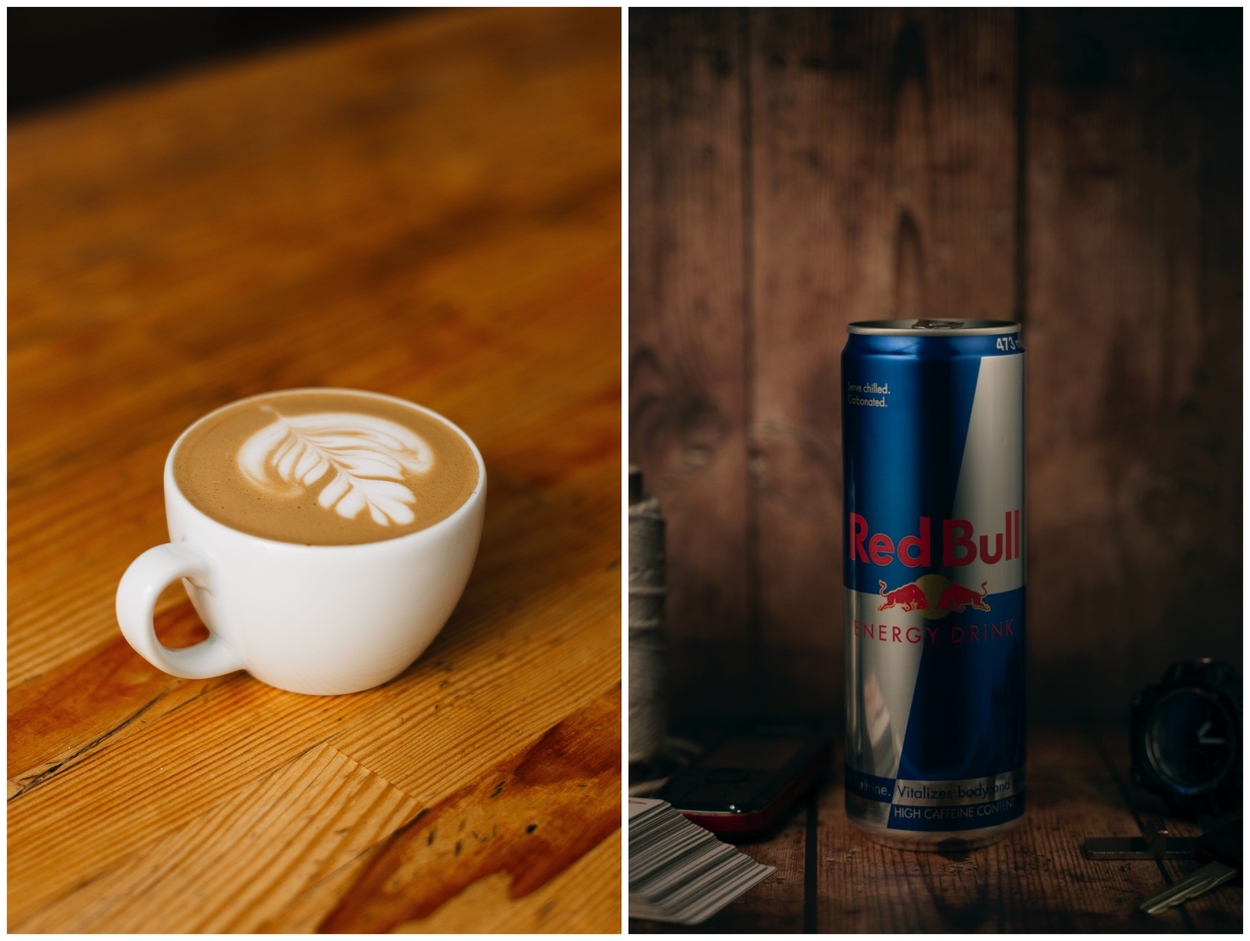 Red Bull and latte are caffeinated beverages that come from different categories.

A latte is a type of coffee and Red Bull is a canned energy drink brand. Latte contains more caffeine than a Red Bull but it carries more benefits than an energy drink.

Caffeine is no doubt the most widely consumed stimulant in the world. Though many people choose coffee to perk them up, others choose an energy drink like Red Bull.

These drinks give instant energy to get us through our day.

Our generation seems to be so keen on multi-tasking so we kind of need that extra energy boost! Sometimes it gets me sad that our bodies have started depending on such drinks to help us get through the day.

Anyway, you must be wondering how these two differ in terms of caffeine count and health perspective.

Let’s find out what these two drinks are all about – one is coffee and the other one is a fizzy energy drink. There must be many differences as well as drawbacks so let’s start.

A latte and a Red Bull are from different categories of energy booster drinks. Red Bull is artificially made containing sweeteners and caffeine extract.

Whereas a latte is all-natural: made from roasted coffee beans and topped with steamed milk.

Latte like other popular coffee variants is made with espresso as the base. Espresso as we all know by now is a very potent form of coffee that’s generally used in the preparation of other coffee drinks.

1/3 of latte usually consists of a single or double shot of espresso. The remaining 2/3 of the drink is steamed milk with a small layer of frothed milk at the top.

The combination of these elements results in a perfectly balanced milky coffee pleasing to the eye with an irresistible texture.

Similarly, Red Bull also has caffeine like a latte but it contains ingredients that are mostly derived from synthesized or artificial sources.

This energy drink comes in many flavors and sizes. It also has a sugar-free version for the calorie-conscious.

Sugar-free Red Bull differs in sugar content and calorie count as well as its levels of certain minerals and vitamins. One 8.4 oz (248 ml) can deliver:

The sweetness in Sugar-free Red Bull comes from the artificial sweeteners – aspartame and acesulfame K.

Latte is a coffee variant and thus, possesses the attributes of coffee.

A cup of plain brewed coffee contains about 2 calories. It also has minerals including 14% of the daily value requirement of riboflavin. This vitamin is necessary for normal cell function and energy production.

Coffee contains polyphenol and antioxidants which fight oxidative stress in your body and may also help in reducing your risk of acquiring certain diseases.

To know more about coffee and its health benefits, read my article right here.

It’s important to keep in mind that milk, sugar, cream, and other add-ons affect the calorie count as well as the nutritional value of your cup of coffee.

Latte and Red Bull offer almost similar amounts of caffeine per serving, though latte has a little more.

However, the amount of caffeine in coffee is affected by many factors including the type of coffee bean, its roasting style, and serving size.

In my opinion, coffee is a better option for a caffeine fix because it’s a natural source of caffeine while energy drinks like Red bull contain artificially added caffeine which can have adverse effects on one’s health if not consumed in moderate amounts.

Health experts advise that healthy adults can safely consume up to 400 mg of caffeine per day, which is equivalent to almost 4 cups (945 ml) of coffee or 5 regular cans (1.2 liters or 42 oz) of Red Bull.

Latte has a mild espresso taste due to the milk added in its preparation.

On the other hand, Red Bull Original is sweet and a bit citrus-like. It has other flavors too like Watermelon, Tropical Fruits, Coconut, and Berry.

The original recipe of latte does not have any added sugar. The hint of sweetness that you taste is due to the rich amount of milk added to it. However, some people prefer to add sugary syrups or other sweeteners to the drink according to their taste.

Red Bull also has a sweetness to it. The regular Red Bull can taste like coffee to some people because of the caffeine. But its original flavor has some tartness which gives the vibes of cough syrup.

But unlike latte, it has other flavors to offer. Each flavor has its unique respective taste and you can choose according to your preference.

How does each drink affect your health?

Effects of Red Bull on health

In my opinion, the marketing of energy drinks by their manufacturing companies is way much better than the actual drinks themselves. They push on marketing to mask the scientific research that consuming these can have adverse health effects especially in children, teenagers, and young adults.

Nevertheless, there are still some benefits in consuming energy drinks as long as it’s done occasionally and moderately.

Though these effects tend to be temporary, they may raise your risk of heart problems in the future if you have an underlying heart condition and if you drink Red Bull in excess.

The original variant of Red bull also contains added sugar which in turn increases your risk of heart disease and type-2 diabetes if you drink too much.

The American Heart Association (AHA) suggests that men and women may take a maximum of 9 teaspoons (36 grams) and 6 teaspoons (25 grams) of added sugar in a day, respectively.

On a brighter note, occasional consumption of Red Bull is considered safe. Owing primarily to its caffeine and taurine content, it can boost focus, energy, and exercise performance.

Watch the video to know more about how Red Bull can affect your health.

Effects of latte on health

Latte is a coffee variant and most of its coffee’s benefits are linked to its antioxidants.

A conclusion of 218 studies linked drinking 3–5 cups (0.7–1.2 liters) of coffee daily can lower the risk of certain types of cancer as well as heart-related diseases.

It also stated that antioxidants in coffee may help in lowering the risk of chronic kidney diseases, type 2 diabetes, Parkinson’s, and Alzheimer’s.

Though latte is high in calories due to the rich amount of milk added, it still carries the benefits that coffee offers. You can make it healthier by replacing whole milk with a skimmed one.

Just like Red Bull, a latte can also boost energy aiding both mental and exercise performance.

However, a latte should also be taken in moderation due to its caffeine content which if taken excessively may increase blood pressure and heart rate.

Latte and Red Bull are caffeinated drinks that differ in nutrient content but they similarly contain caffeine.

While latte offers the coffee benefits of antioxidants, Red Bull contains a significant amount of B vitamins.

Red Bull has been observed to temporarily accelerate blood pressure and heart rate. At the same time, it can boost focus and exercise performance when taken in moderation.

Latte may help in lowering your risk of certain diseases while providing an energy boost. However, caffeine-sensitive individuals and pregnant women should limit their intake.

Whichever drink you choose, it’s always best to drink in moderation to reap the benefits they promise.