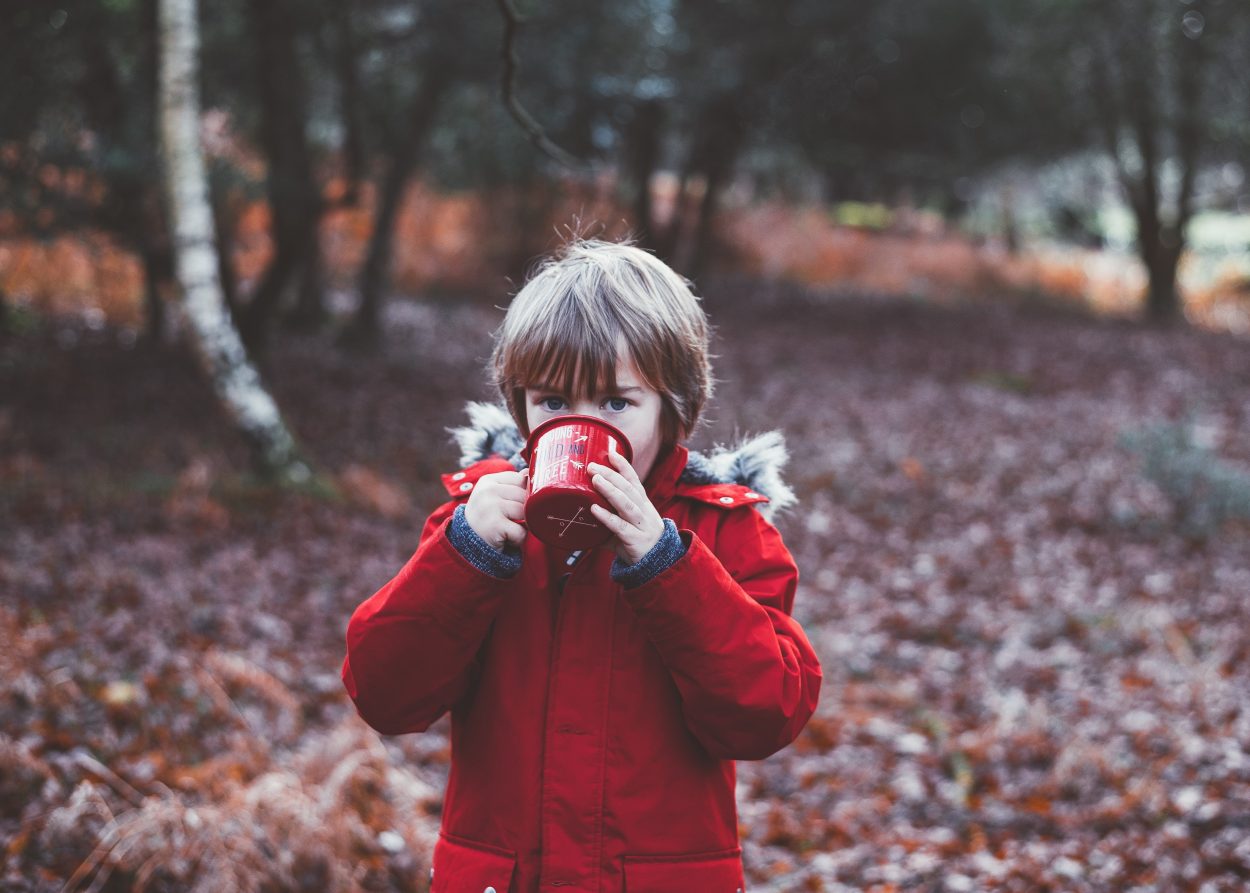 Coffee for kids is not good. It has many side effects. So, whether they are toddlers or teens, the general census is that they shouldn’t be drinking coffee.

As adults, our dependency on coffee can be seen every day. Most of us are not fully awake until or unless, we haven’t sipped on a freshly brewed morning cuppa.

As times are changing and humans have started multi-tasking, coffee is beneficial. It elevates our moods, provides us instant energy, and gives us the pick-me-up we need. But what about our children who accompany us when we sip on our latte’s and cappuccinos in the coffee shop?

Well sure, they can have a babyccino – which is frothed milk with chocolate powder and no amount of coffee – but what if kids ask us to give them what we’re drinking?

So, in this article, let’s unravel the whole idea of kids drinking coffee. Is it safe or not?

Though there is still research going on as to how caffeine effect’s a child’s developing brain, with what is visible, caffeine affects kids differently. It increases anxiety, insomnia, and blood pressure.

Caffeine is one of the sole reasons that has made energy drinks and coffee so popular. This is a very potent and active compound that reduces drowsiness and makes you feel less tired instantly.

Plus, it helps protect against many diseases like Parkinson’s and Dementia.

The FDA has set a limit for daily consumption for adults. That is only 400 mg of caffeine in a day. As adults, if we’re not mindful this limit can be crossed easily. But what about kids?

Well, the same caffeine that helps us in so many ways can have a negative impact on kids. The thing to keep in mind here is that caffeine is classified as a stimulant. This means that affects how your body functions.

Since they’re so small in size and body weight, a small amount of caffeine can make children irritated, increase blood pressure, insomnia, and anxiety. Though children get caffeine from other sources too, besides coffee which is chocolate, sodas, and even ice cream.

But still, you need be to be very careful. As studies are still ongoing and there’s no definitive answer of how caffeine can affect kids short-term and long-term except these few observations.

You can watch this video for a better understanding.

According to a study, a 12-year-old can have 100 mg of caffeine a day. But since there isn’t enough study done to be confident about the long-term effect, many, including me, don’t recommend any amount of coffee for a 12-year-old.

For an average adult, coffee drinking in moderate amounts isn’t a concern. In fact, coffee is one of the largest sources of antioxidants in the American diet. But coffee for children is a concern.

As social media has taken the world by storm, children and young adults are exposed to Instagram influencers, Tik-Tokers, and celebrities flexing their Starbucks frappes on their accounts.

Their young mind is attracted to this ‘cool’ and trendy drink and they want to drink it too. Though coffee itself isn’t bad, the U.S Food & Drug Administration hasn’t given guidelines for coffee intake for children.

Also, the American Academy of Pediatrics (AAP) suggests not giving any caffeine to growing children. Since coffee has mostly caffeine, we can consider this as a big NO from the AAP too.

Contrary to belief, a study done in 2017 concludes that children from the age of 12 and above can drink 1 serving of an 8 oz coffee cup in a day.

But many pediatricians suggest avoiding coffee and the caffeine it has entirely. Backing this up is AAP that says, that no amounts of stimulant substances should be present in any beverage of children.

Therefore, in conclusion, it’s recommended not to give your 12-year-old a cup of coffee in any amount.

Below, I prepared a chart of foods common with children that contain caffeine at their respective levels.

What Age Can You Drink Coffee?

The is no definitive age given by any foundation but the experts recommend that one can start drinking coffee once the growth is slowing down which is the end of adolescence. This is usually at the age of 17 to 18.

The stimulant in coffee is caffeine. In the U.S., there are no standards for coffee consumption in children, but in Canada, the limit is 45 mg daily (equivalent to the amount of coffee in one can of soda).

But this can cause;

Even very small amounts of caffeine can cause such reactions in young children. Furthermore, bone strength is highest during childhood and adolescence.

And as I talked about in my other article, caffeine interferes with calcium absorption, making it difficult to grow properly. Plus, the whipped creams and flavored syrup in these coffees can cause cavities and dental issues. So, it’s much better to start late than start early in this scenario.

Therefore, starting by the end of adolescence in small amounts is much better, which usually starts by the age of 17 to 18.

Effects Of Caffeine On Children’s Behavior

Caffeine can affect the behavior of children. They can get irritated, have insomnia, be less hungry, and become hyperactive.

Giving coffee to kids and teens is not good for them. Though for an adult it is quite beneficial, it can have some adverse effects on children. One of the main reasons for not recommending coffee for children is that enough studies are not done to determine the complete effects of drinking coffee in children.

But as new coffee shops are opening up each day, some children do consume a bit of coffee and face major behavioral changes.

Coffee contains the active and strong compound caffeine, which is not good for children. When adults drink coffee this caffeine wakes them up and reduces their tiredness.

But if children consume it, they may face symptoms of caffeine withdrawal. This happens because the presence of caffeine increases their energy levels drastically and then drops it once it is out of their system. This fluctuation causes them to be irritated and agitated.

Children need 10 -12 hours of sleep every day. This is essential for them to grow. Coffee is a strong stimulant that stays in the blood for up to 10 hours, thus not making them feel sleepy. This may lead to insomnia.

The hyperstimulation caused by coffee may cause hyperactivity, restlessness, and trouble concentrating. This can negatively affect students who have to sit still and pay attention for the entire school day.

The caffeine in coffee may cause a decrease in appetite. A balanced diet that includes fish, meats, healthy fats, whole grains, vegetables, and fruits, is essential for growing children.

It is likely that kids who drink coffee will experience a decline in appetite and overall nutrition due to the stimulant effect of coffee.

Does Coffee have Any Other Impact On Children?

Other than giving behavioral changes in children coffee also impacts the overall health of the child. These changes are related to the nervous system, malnutrition, bone loss, and cavities.

Since coffee is a powerful stimulant it’s not recommended to be consumed by children. The above mentioned are only the behavioral changes caused by coffee in children. But the regular consumption of coffee by children can have other negative impacts as well on their overall health.

A study done in the Journal of Pediatrics showed that when children from the age of 5 to 16 consumed coffee, their brains started to become active while their blood pressure increased significantly.

This was also accompanied by a decrease in the heart rate. This inevitably made it difficult for the children to focus and cause other effects like insomnia, diarrhea, and nervousness.

When your child consumes a lot of caffeine, their nutrition may suffer. Kids’ appetites are reduced when they consume energy drinks, sodas, and coffee. And any drink that contains caffeine like coffee is usually a sugar bomb with all the excessive sugar, creams, syrups, and flavoring in it.

The diuretic effects of coffee are well-known. In other words, it causes the body to lose calcium as a result of increased urine production. As a result, bones can deteriorate.

Diuretics also leach calcium from the body because of their large caffeine content. The loss of calcium from caffeine consumption is 6 mg for every 100 mg consumed, which is significant for children who need calcium to grow.

Coffee is an acidic drink. And acidic drinks are not that good for children. They cause damage by weakening the teeth and eroding the tooth enamel.

Plus, children are more prone to cavities because it takes years for their adult teeth to harden once baby teeth are lost. This makes them eligible for more teeth and mouth issues once they grow up.

As a parent, you might be in the dilemma of whether you should include coffee in your kid’s diet or not. I mean, they do eat other foods which have caffeine-like chocolates and sodas.

But caffeine isn’t good for your children. Though coffee naturally is beneficial for humans, it can cause the opposite effect when it enters a child’s body.

Since they are small in size and weight, insomnia, irritation, and cavities are some of the major effects that they might face.

The FDA hasn’t given any guidelines unlike Canada, but, personally, I don’t support giving caffeine or coffee to children. It’s better that they start drinking coffee when they become adults.