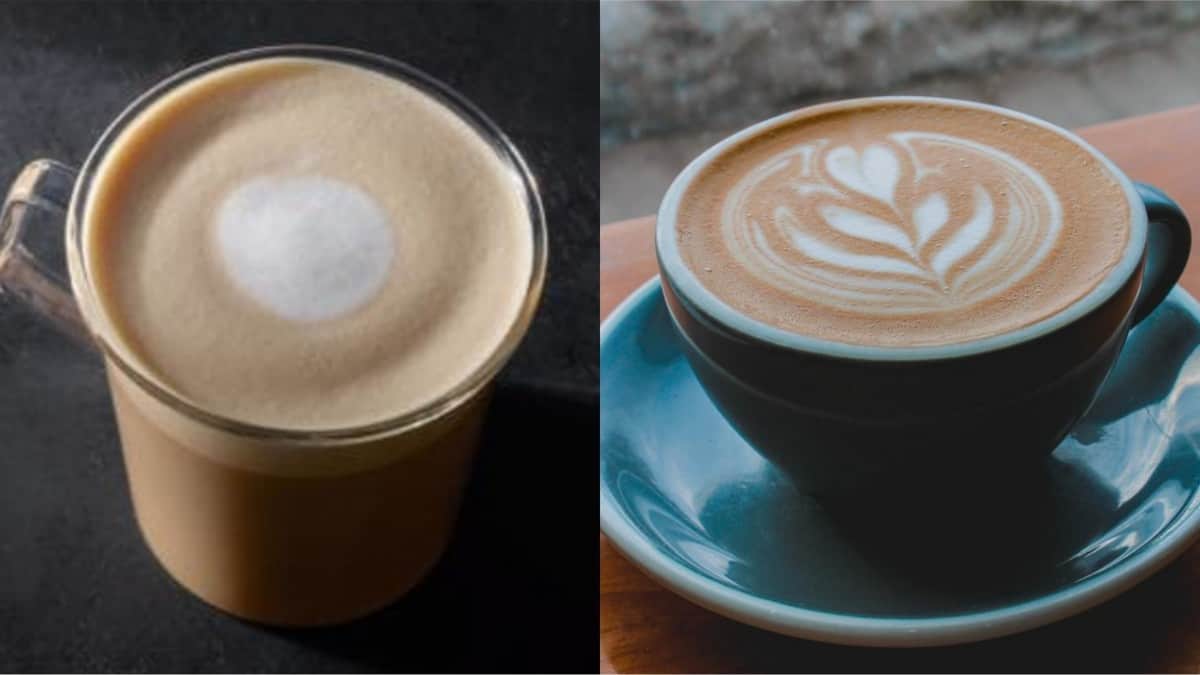 The two differ in a couple of areas, including the type of milk used, size, nutritional content, and so on. Starbucks’ flat white is stronger than a latte because of its double ristretto shots.

Flat white and latte’s, like Shrimp and Prawns or Turtle and Tortoise, are usually mistaken as the same when this wasn’t the case.

Starbucks, the world’s top and most renowned coffee company, introduced flat white to its menu, and coffee enthusiasts have been raving about it ever since.

You’re probably here for the one reason: you have no idea what these two drinks differ from.

Well, I have excellent news for you since this article is written specifically for you. I’ll explain why these two beverages aren’t the same and why they each have their own distinct features.

Keep on reading so you’ll have something to brag about to your coffee-loving buddies since you’ve learned the differences between these two.

What Does Flat White Mean At Starbucks?

A flat white is a highly concise summary of expertly steamed milk poured over double shots of espresso and topped with exquisite Rosetta dot.

The flat white’s name is most likely derived from how Australians reference their coffee beverages.

According to Australian food historian Michael Symons, a standard espresso is a “short black,” one scaled up with the addition of hot water is a “long black.” The one with milk is a “flat white.”

How Do You Order A Flat White At Starbucks?

If you dare to experience this drink, head to your nearest Starbucks and order it with the details provided: “flat white, no steamed milk, half-heavy whipped cream, half water steamed.”

If you prefer to try one in the comfort of your home, you can order this drink on the app or the web.

It’s a classic drink that is ideal for those who like espressos, cappuccinos, or lattes with a few extra shots.

Compared to regular lattes, cappuccinos, and so on, this drink comes with an extra shot. The shots are ristretto, which means they are made with less water and have a stronger espresso flavor.

Depends on if your barista has figured out the pour, it should also be prepared with a classic “latte art.”

Ultimately, it’s a wonderful addition to the menu for more sophisticated coffee addicts.

Yes, it is because it is made with whole milk rather than the standard 2%, making it a little sweeter and creamier.

The flat white is typically made with two ristretto shots, which are more concentrated, sweeter espresso shots served with less water.

To complete, sprinkle with full-fat milk that has been heated but not steamed and some latte art.

Steamed milk typically breaks into superlight foam on top and lava-hot liquid on the bottom. On the other hand, micro-foaming the milk evenly heats the liquid while dispersing bubbles all through it.

As a result, the coffee is strong but sweet, with a rich, velvety texture.

Why Is Starbucks Flat White So Expensive?

Simply put, you’re paying extra for the skills and expertise behind your cup of flat white.

If you buy coffee daily, you’ve undoubtedly observed that a flat white frequently costs more than a latte or cappuccino.

This drink is considerably more expensive because it takes skilled baristas to make one high-quality cup of flat white and create latte art.

Given the fact that flat whites are smaller in size, they are somewhat more pricy than a latte or cappuccino.

According to coffee expert Chloe Callow, the somewhat higher price of flat white compared to other kinds of coffee is not related to more pricey ingredients. Instead, it’s because of the production or preparation requiring more skills, wherein a highly skilled barista should be well compensated.

Also, the notion that flat whites are becoming trendy in coffee shops may explain why the costs are slightly higher.

To give you a better understanding, below is a list of latte’s and flat white’s on the Starbucks menu, along with their respective pricing.

All were in tall size so we could compare the costs more precisely.

What Is The Difference Between Starbucks’ Flat White And Latte?

The difference is entirely in the milk; Starbucks’ flat white is much less milky than a Latte. Their sizes and nutritional contents are also quite different.

If you’re not a coffee enthusiast and can’t identify the difference between other varieties of coffee, a brief glance at flat white may trick you.

It has the look of a latte and is about the size of a cappuccino. Once you look carefully, you’ll realize that it’s not as milky as a latte.

The milk, as previously said, defines the distinction between the two.

Milk can be served in many forms, such as liquid milk, steamed milk, or milk foam. The most significant differences are how the milk is prepared and how skillful the barista is.

Usually, a latte is prepared with the these:

The main difference between this and a latte is that the microfoam is much less formed in the milk and even on the topping.

The milk keeps its viscosity, but much less so than in a latte.

In specific circumstances, much less milk is used. The produced foam is much thinner and does not separate from the milk but instead remains wholly contained inside the liquid.

A flat white’s contents vary greatly, but generally, they are as follows:

A flat white is typically smaller than a latte or cappuccino; however, the Starbucks version is available in the store’s standard drink sizes.

Unlike the latte, which is usually served in a 16 oz Grande, the Flat White is served in a 12 oz tall cup. Also, lattes are typically made with 2% milk.

So, here’s the nutritional information of a flat white according to Starbucks’ regular recipes.

In comparison, here’s the nutritional content of a regular latte:

If these caught your curiosity, you could learn more by watching this video.

Flat whites are typically 200 ml in size and are generally served with double shots of espresso, allowing them slightly stronger in flavor than a latte.

A flat white is only available in one size, which is relatively small. The flat white’s small size allows it to be a strong cup of coffee.

It has the same quantity of coffee as a medium latte. A medium latte obviously contains more milk and the same amount of coffee, which will be considerably stronger.

Furthermore, according to the nutritional information of Starbucks’ flat white, it contains around 130 mg of caffeine per 8 fl. oz. cup.

It’s definitely stronger than a regular latte, with just around 75 to 80 mg of caffeine per 8 fl oz cup.

Does a Flat White Count As A Latte At Starbucks?

No, since the two drinks are quite different.

As a guide, these are the several varieties of Latte on the Starbucks menu:

Or if you’d like, you can also try their Seasonal Latte Flavors:

As you may have noticed, flat white does not count or belong to the “latte” categorization in Starbucks’ menu.

Flat white is significantly different from latte, although they’re often confused as the same drink.

Where you can actually find it is in the category of espresso.

Flat white is made with smooth double ristretto shots of espresso and steamed whole milk to create a balanced, velvety-textured cup of coffee.

Even though I keep banging on how delicious a cup of flat white or latte would, you should be careful around coffee in general as over consumption can lead to adverse effects.

Final Thoughts (Which Is Superior?)

Flat white isn’t listed as a latte on Starbucks’ menu since, as explained in the article, these two beverages are entirely different.

The two differ in a couple of areas, including the type of milk used, size, nutritional content, and so on.

Which of Starbucks’ flat white or latte, in my opinion, is better? I’d say the Starbucks flat white won me easily!

It’s just that this isn’t your typical cup of coffee. It shouldn’t be hidden under the shadows of a latte since it has a uniqueness of its own.

If you enjoy exploring new drinks but still want a caffeine boost, the Starbucks flat white is great since it is significantly stronger than the latte.

Latte, on the other hand, has its own splendor.

Suppose you’re caffeine-sensitive or wanting to restrict your caffeine consumption. In that case, I recommend sticking with latte’s as they’re lower in caffeine.

If you want to understand more about flat whites. Read this article, which furthers information about this drink.

link to Sidama Coffee (Everything to Know)

Sidama coffee is a finely processed, flavored organic Arabica coffee that is almost 95% washed and is harvested in the Sidama region of Ethiopia. We know you value perfection, rich flavor, and the...