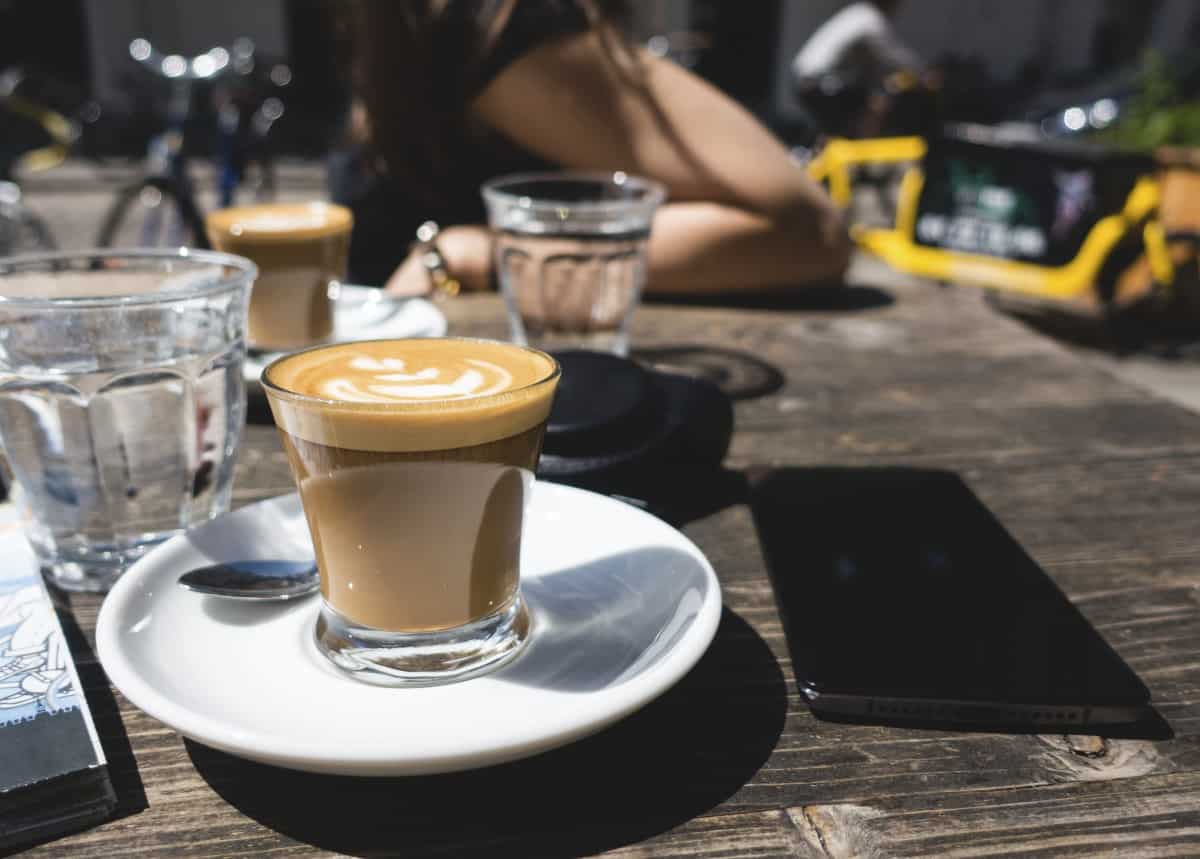 A flat white is a type of coffee that lets you savor the rich and strong taste of espresso while still enjoying the creamy texture of steamed milk.

“Flat white” … just reading and hearing about it tickles your interest, doesn’t it?

What is it? Why the term “flat”? What’s in it? Is it healthy? What makes it different from other types of coffee?

This article will tell you most of what you need to know about Flat White.

Prepare your coffee diaries, because, by the end of this article, you may have discovered a new favorite type of coffee.

Now, let’s jump right into it!

What is Flat White Coffee?

Flat white coffee is an espresso-based drink containing steamed milk. It’s a delicious beverage that has a smooth, velvety, and strong feel to it.

Smooth ristretto espresso shots are mixed with exactly the appropriate amount of steamed whole milk to achieve a taste that’s neither overly intense nor excessively creamy.

The steamed milk in a Flat White is more precisely termed “microfoam.”

It essentially implies that the milk has a much more velvety texture and glossy finish, which is achieved during the steaming process by allowing small air bubbles to form in the milk.

What is in a Flat White?

It’s your typical cup of coffee, but with a twist!

One of the distinguishing features of Flat White is that it’s far less milky, making the coffee flavor really stand out.

It’s also much less foamy, resulting in a smooth, creamy coffee drink with a bit of kick, ideal for your daily cup of joe!

Its difference from other types of coffee is its textured milk, which is influenced by Italian coffee. Every sip is velvety smooth thanks to the way the milk is foamed.

Let’s take a closer look at its nutritional content.

Here’s the nutritional information of a Flat White according to Starbucks’ regular recipes.

What is a Proper Flat White?

The quality of the steamed milk is crucial to a proper Flat white. The milk is also known as “microfoam.”

What exactly is a microfoam?

Microfoam is the milk that has been steamed using a steaming wand to create foamed milk with tiny bubbles that are barely noticeable.

Pouring and steaming micro-foam appropriately is the key to making a proper, if not perfect, flat white.

Here’s a bonus fun fact for you! Did you know that you can use Flat White as a blank canvas?

When you’re in the mood for something artistic, the flat white may be the starting point for aspiring baristas learning how to make latte art.

Imagine the creamy and velvety scent of your piece of art!

Why is it Called a Flat White?

Flat White derives its name from the fact that it’s topped with a very thin, “flat” coating of steamed milk.

Because it’s termed “Flat” white, the amount of foam should be as flat as possible, or roughly 1cm.

While some argue that there is a debate between Australia and New Zealand as to where flat white originated, for the purpose of this article, let’s stick with New Zealand.

There, the term “flat” refers to a soft drink or soda which has lost its fizz and has no bubbles.

As time went by, “flat” naturally became a term for Kiwis in describing a coffee with fewer bubbles than a cappuccino.

What is a Flat White Called in America?

The Flat White, according to Starbucks, originated in Australia, and in a news release, here’s how it was described:

Ever since its origin in Australia in the 1980s, the Flat White has become a café mainstream in the United Kingdom and is now a rising demand among coffee connoisseurs in the United States and Canada.

Due to the continuous and increasing sophistication of coffee lovers worldwide and notably in the United States, Flat White has become an ideal beverage for coffee enthusiasts.

It’s good for you! Coffee is typically a healthy beverage, and Flat white is no exception.

Flat white, like any other type of coffee, is healthy. But the thing is, thanks to its smaller size, it basically means fewer calories overall.

Additionally, you can make it versatile by using variations of milk. You can also use unsweetened nut milk. Another option is to make it into a skimmed latte to lessen the fat.

When compared to other varieties of coffee, a flat white is quite healthier, depending on the milk used.

As a reference, here’s a ranking of your go-to coffee ranked on calories, sugar, and fat content:

Flat white is a keto-friendly drink.

According to a reliable news site, the flat white is a keto-friendly drink.

It still has the same foaming and creaminess as your regular cup of white coffee, but without the carbohydrates and high caffeine content.

If you want to get your hands on this drink, you can go to your nearest Starbucks and say “flat white, no steamed milk, half-heavy whipping cream, half water steamed.”

Is Flat White a Single or Double Shot?

A flat white is a coffee beverage made by pouring microfoam over a single or double shot of espresso, although traditionally, flat whites feature two shots.

According to the global coffee giant, Starbucks, a flat white is an espresso drink prepared with two ristretto shots, a thin coating of silky steamed whole milk, and a latte art dot.

How Do You Make a Flat White?

Here are the ingredients and step by step procedure for a savory cup of Flat white, according to BBC Good Food:

You will also need:

To learn more about how to make a flat white at home, watch the video below.

What is the Difference Between a Latte and a Flat White?

It’s all in the milk – flat white is less milky than a latte.

On the surface, it resembles a latte, which is roughly the size of a cappuccino. However, if you look closer, you’ll notice that it’s less milky than a latte.

As mentioned, the difference between the two is determined by the milk.

Milk is used in a variety of forms, including liquid milk, steamed milk, and milk froth. The main difference is in how the milk is prepared and how skilled the barista is.

A latte is typically made up of the following ingredients:

The primary difference between flat white and a latte is that the microfoam is considerably less formed, both inside the milk and on the surface.

The milk retains its texture, although considerably less so than in a latte.

On certain occasions, significantly less milk is used. The produced foam is a lot finer and doesn’t separate from the milk, but rather remains entirely contained inside the liquid.

The ingredients of a flat white vary a lot, but in general, it consists of:

Why is Flat White More Expensive?

This drink is slightly more expensive since it requires skilled baristas to create one high-quality cup of flat white, as they are also in charge of creating latte art.

Despite the fact that flat whites are typically smaller, they cost somewhat more than a latte or cappuccino.

According to coffee expert Chloe Callow, the reason for the slightly higher price of Flat white compared to other varieties of coffee isn’t because the ingredients are more costly, but rather because the preparation of flat white requires more expertise.

A highly trained barista who makes the flat white is paid more, which is why the drink is slightly more expensive.

Additionally, the fact that flat whites are increasingly becoming one of the top picks in coffee shops may explain why the prices are slightly higher.

Paying a little more for a silky-smooth cup of double shot espresso while enjoying it as a piece of art probably wouldn’t hurt, right?

Coffee truly is loved by many. Who doesn’t?

Aside from the go-to coffees that you get on a regular basis at your favorite coffee shop, it’s very daring and thrilling to venture outside of your comfort coffee zone and try out new varieties!

Would I suggest you try Flat White? Of course!

Flat white isn’t really your typical cup of coffee, and because it offers far more, its growing reputation and appreciation are justifiable.

It’s less frothy, but it has a velvety, silky feel that most of you will definitely fall in love with.

It’s somewhat more expensive than other coffees like latte and cappuccino, but it’s a masterpiece and a lovely sight you’ll be willing to pay to witness.

So, what else are you waiting for? Run to your local coffee shop and give it a shot!