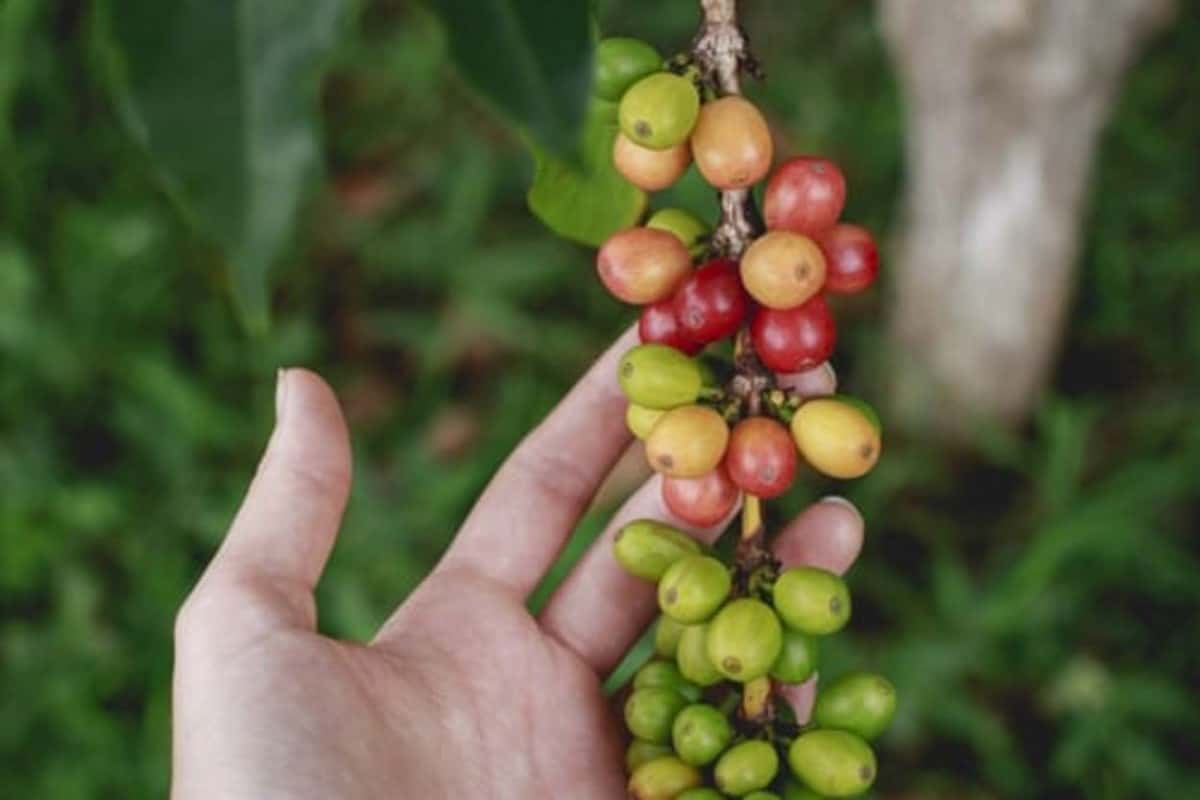 Coffee today is the most popular drink in the world, with 450 million cups being consumed every day in the United States alone.

It has a long history that traces its origins back to 850 CE in Ethiopia when the coffee cherries’ deliciousness was first discovered.

Even then, the process of extracting coffee from beans as we know it today took many years to be developed and refined.

But here’s the gist of how coffee is made from bean to cup!

Of course, a lot goes into the making of our favorite drink in between so let’s get into that!

What Is The Origin Of Coffee?

Ethiopia, an African country, is reportedly the place where coffee originated.

Many sources pinpoint that coffee was first discovered in 850 CE in Ethiopia.

Legend has it that a goat herder named Kardi noticed that some of his goats became especially active after nibbling on cherries from a certain plant.

He tried the cherries for himself and was surprised when he too experienced the same energy boost as his goats. Wonderstruck, he brought the cherries to a nearby monastery.

The monks were appalled and called the cherries the work of the devil and promptly threw the seeds into the fire.

But the most mouthwatering smell began to come from the roasted seeds, and the monks retrieved them and placed the beans in a jug filled with hot water.

And that, my friend, is how the first cup of joe was brewed—that is, if the myths are to be believed.

Slowly but surely, coffee began conquering the world and more and more cultivation and brewing methods emerged through the years.

Check out the video below if you want to learn more about the history of coffee:

How Are Coffee Beans Grown And Harvested?

The cultivation and harvesting of coffee beans vary from place to place.

Below is a summary of the basic process of producing coffee beans!

A coffee plant usually takes 4 to 7 years to reach maturity and begins to grow fruits.

The fruits are like cherries, initially green, and turn red when it’s harvesting time.

It’s important that the seedling are planted in beds with lots of shade so they can fully sprout.

After a few days, they are transferred to individual pots where they can be tended to. The plant is moved a final time to a permanent plot where it will reach full size.

Coffee harvesting happens once a year and it lasts for 2 to 3 months, depending on the ripeness.

Coffee beans also reach their peak in flavor and quality at different times, which is why coffee brands can often switch ingredients for their blends a few times each year depending on which beans are in season.

Strip picking and selective picking are the two traditional ways of harvesting coffee:

Collectors gather between 100 to 200 pounds of cherries every day on an average farm. Out of them, only 20 percent is chosen as the best quality coffee.

How Are Coffee Beans Manufactured?

Let’s explore each one!

The dry method is an older way of processing and distributing coffee beans and this method is popular in countries where water supply is limited.

The freshly picked cherries are soaked in the sun, and they are raked a few times a day to allow them to dry perfectly.  When there is only 12 percent of water left in them, the beans are hulled by hand or machine.

In the wet method, the skins are detached before drying the coffee beans.

The beans go through a pulping machine to separate the pulp and skins from the seeds. Then they go through water channels which sort them according to their weight.

After that, a rotating drum separates them and they are transported to a water tank for fermentation.

There the beans are kept for 12 to 48 hours and naturally created enzymes help to remove the parenchyma.  After this, the beans go through another water channel and are ready for drying.

Do Coffee Beans Come From Cherries?

Coffee beans don’t come from the cherry fruit, but they do look similar to cherries.

The fruit comes from coffea, which is a family of shrubs and small trees.

The shrubs that the beans grow on produce coffee cherries, green and small fruits which turn bright red when ripen.  The seeds of these bright red cherry-like fruit are called coffee beans.

The exocarp of the skin of the cherry is bitter and thick but the mesocarp or the inside of the fruit is sweet like a grape. Underneath the flesh, there is a slimy layer called parenchyma, which protects the seeds.

How is Coffee Made (Step by Step)

By the time a coffee seed ends up in a cup, it passes through 10 very important steps.

I’ll discuss each one!

Just like any other tree, coffee too needs to be planted in order to harvest cherries. If we cannot find any processed seed, then we have to plant a seed to grow it into a coffee tree.

That will take quite a few years!

Harvesting refers to the collection of food goods.

A coffee tree usually takes 3 to 4 years to grow the cherries. Then picking starts to collect the fruits from the trees.

This part requires a dry method or wet method to turn the seeds into coffee beans.

The beans need to dry by sunlight or machine.

Hulling, polishing, grading, sorting, and finally removing the defective beans to ensure that only the best quality coffee ends up in the final product.

Green coffee beans are prepped for shipping all over the world.

Of course, the beans would have to be tasted first to guarantee that the standards are maintained in the process of manufacturing them.

The beans are then run through roasting machines which bring out the signature aroma and color of coffee. Generally, beans are roasted at 550 degrees Fahrenheit.

Proper grind is necessary to get the perfect flavor.  Beans can either be grounded finely or roughly, and this depends on the brewing method you will use.

Finally, you can enjoy your cup of coffee. There are various brewing methods available such as through coffee machines, french press, drip, and many others!

Robusta is prepared from the beans of the plant Coffea canephora.

Robusta coffee was first found in central and western sub-Saharan Africa. This coffee is said to make up 40 percent of the world’s coffee production.

However, robusta has high caffeine content with a bitter and rubbery flavor which is not often liked by a lot of people.

Arabica is the most popular type of coffee and is known for its light and airy flavor.

People consider it the first cultivated coffee in the whole world. It was first found in Ethiopia and then cultivated in Yemen. Arabica coffee is said to make up 60 percent of the global coffee production.

Its appealing flavor makes it an instant hit for all kinds of coffee lovers.

Barako, an extremely popular coffee from the Philippines, and is also known as Kapeng Barako and Batangas coffee which is a variation of the Coffea Liberica.

This coffee was first planted in Lipa, Batangas.

Spanish friars introduced the Barako coffee to the Philippines, where it became known for its strong aroma and splendid flavor, resulting in a dynamic and memorable taste.

The Basic Differences Between Robusta, Arabica, And Barako

All three coffee types vary in taste and other elements as well.

Robusta coffee has a bitter and rubbery taste which many may find off-putting.

On the other hand, Arabica coffee has a smooth, sweet, and buttery taste.

Barako coffee has a strong flavor but is very layered and full-bodied in taste.

In terms of cost, Robusta coffee is almost half the price of Arabica as it is much easier to grow.

Here’s a table that sums all this up:

Since it was first discovered, coffee has enchanted us with its aroma, flavor, and quality.

It has had a long journey from being a relatively unknown plant in Ethiopia to being one of the most popular drinks in the world.

Through the centuries, cultivating, harvesting, and brewing methods have changed, especially because of the advent of technology. We are also able to access more and more coffee blends from all over the world nowadays.

These all make it such an exciting time to be a coffee lover!

You can try out different methods, tools, and recipes in your search for the perfect coffee.

Of course, I’m partial to the light and sweet flavor of Arabica, but I wouldn’t say no to Barako either!

Which one would you try next?

link to Sidama Coffee (Everything to Know)

Sidama coffee is a finely processed, flavored organic Arabica coffee that is almost 95% washed and is harvested in the Sidama region of Ethiopia. We know you value perfection, rich flavor, and the...

Continue Reading
link to Health Benefits of Coffee: Reasons Why Coffee is Good for You

A guide to some of the most important health benefits that are associated with coffee, both by drinking it and through a number of other uses for this versatile...