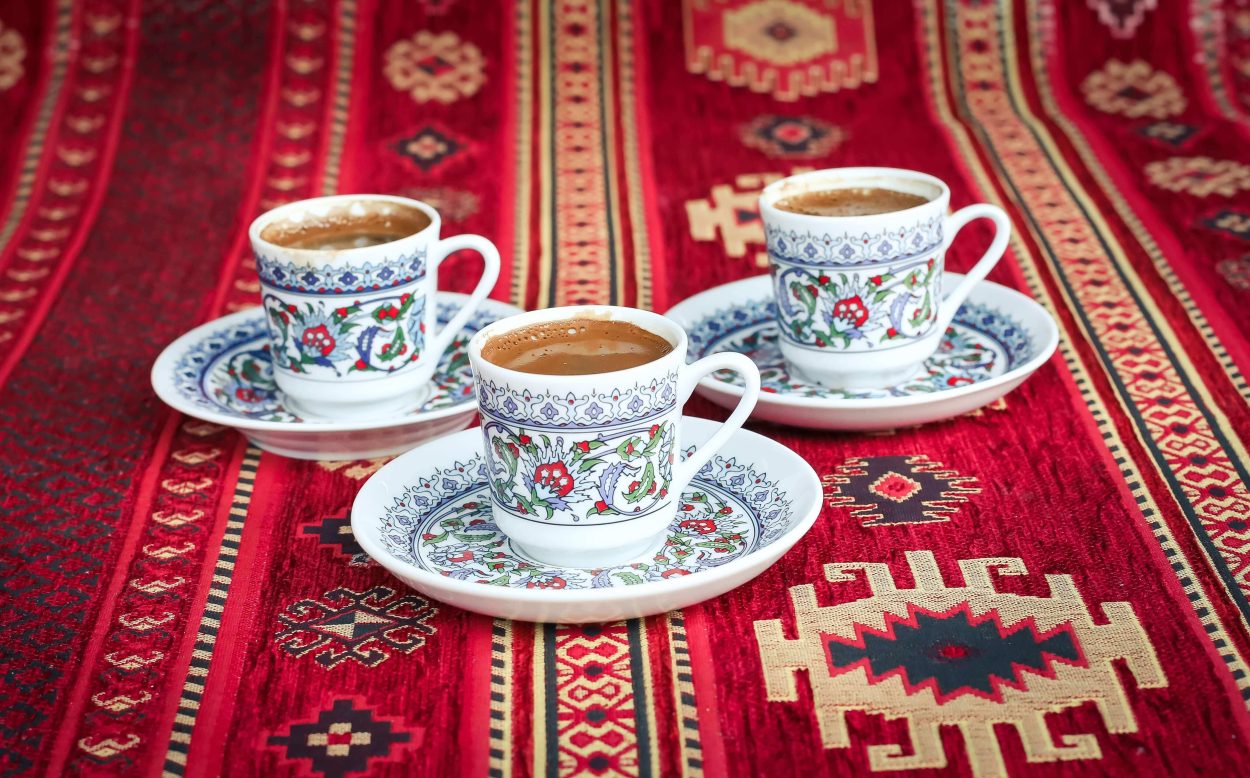 Turkish coffee is one of the most unique types of coffee out there. It’s a boiled coffee that’s very strong and a part of Turkey’s culture. It’s an unfiltered coffee boiled in a cezve.

Coffee plays an important role in most of our life. It is the perfect caffeine fix with an addictive aroma that soothes our minds and elevates our energy levels so that we can get through the day.

Though coffee is not as old as tea, for some parts of the world, coffee is a strong part of their culture and heritage. One such example is Turkish coffee. You must have come across this name many times. But today, let’s dive deep into this coffee.

In this article, we’ll discuss everything that is related to Turkish coffee.

What Is Turkish Coffee?

Turkish coffee is a strong-boiled coffee that is unfiltered. It’s boiled in a copper cezve and served with a sweet Turkish delight.

Every culture has its own way of eating and drinking. They have their own specialty items and delicacies which get popular all over the world. One such example is Turkish coffee.

It’s a well-known type of coffee and is a very prominent part of Turkish culture. Turkish coffee even made it to UNESCO’s list of Intangible Cultural Heritage of Humanity in 2013. So, this can give you a very clear idea of how important Turkish coffee is in their society.

It’s a way of living and celebrating when people come over. Now that the history lesson part is over, let’s get to what Turkish coffee is all about.

Turkish coffee is an unfiltered boiled coffee that is very strong and powerful. It is made of fine coffee grounds and with little water. No saucepan is used to boil a big batch of coffee. Instead, cezve or ibrik is used.

Both are the name of the same copper pot. But in Turkey, it’s commonly known as cezve. It’s a wide-bottomed small copper or brass pot with a long handle and a lip designed to pour the coffee out.

You can watch this video on Turkish coffee to know more:

How Is Turkish Coffee Made?

Turkish coffee is made by boiling coffee ground, sugar, and water in a cezve. Then, once done, it’s poured in a kehva cup which is a small coffee mug for serving.

Turkish coffee is one of the strongest coffees. That’s is because finer grounds of coffee are boiled in water. This extracts most of the coffee compounds, thus making it concentrated. But having said that, let’s unravel how the whole process starts.

Whenever you go to a Turkish house, the host of the day doesn’t ask you whether you’d like coffee or not. Instead, they ask you how much sugar do you want in your coffee. It’s so compulsory to have coffee in Turkey, it’s a tradition for them.

Anyways, then to begin the whole brewing all you need is a:

But before we get started, you need to remember the ratios. For every cup of coffee, you’ll need 1 ½ cup of water and 1 heaped tablespoon of coffee grounds. I talked more in-depth about this in my other article, you can check it out to understand why coffee ratios are important.

One cezve can yield two cups of Turkish coffee at once. But a large one can make 4 to 6 cups of coffee at one time. So, it’s all up to to you as to how much coffee you’re going to make using which size cezve.

Turkish coffee is very potent and concentrated because of how it’s made. It tastes bold, very bitter, and rich with more density than other unfiltered coffees.

There are very few kinds of coffees that are boiled instead of brewing. One such is Turkish coffee. Usually, in South East and the Middle East, boiled coffees are very famous and have very strong roots in their lives.

Since this coffee is made with a very fine grind, most of its compounds get extracted in the water. Plus, the ratio of water is less considering how much coffee grounds are used per cup.

Therefore, Turkish coffee is very bold and thick in comparison to other coffees. Its bitter-sweet flavor and rich density make it a power pack cuppa. It’s very concentrated and cannot be drunk more than once.

Turkish coffee is very potent and the sweetness is added as per request. You can choose to make it extra sweet or have no sweetness at all. But typically, it’s enjoyed with moderate sweetness.

Is Turkish Coffee Stronger Than Espresso?

Espresso is one of the most potent forms of coffee. The potency and strength come from the fact that it’s brewed using high pressure from the hot water for a short period of time.

This leads to a much stronger cuppa than any other coffee. That’s the reason, it’s only made in 1 oz shot at a time. And is also used as a base for other coffee drinks like Americano and Latte etc. this means that espresso is much stronger than Turkish coffee? No, it’s not.

You see, Turkish coffee is made from even finer grounds of coffee than the ones used for espresso. This allows for more extraction to happen in the water while it gets boiled.

This results in an even stronger flavor profile and a higher amount of caffeine too. There’s a Turkish saying about coffee that goes like, “black as hell, strong as death, sweet as love.”

Do You Drink The Sludge In The Turkish Coffee?

There are people who drink the sludge in Turkish coffee under the pretense that it is somehow healthy, however, drinking the sludge is not recommended.

The sludge or the sediment is the part that settles at the bottom and around the inside of the cup, where all the unwanted coffee compounds like the cafestol, kahweol, and concentrated caffeine are found. These compounds are not healthy and can cause health issues.

There’s a heavenly aroma whenever Turkish coffee is being prepared. Though, coffee is very aromatic on its own. The sludge or the sediments which are left in the coffee are the ones responsible for elaborating this aroma.

This sediment or sludge is caused by the finer coffee grounds that are not soluble in water. Where other coffee gets filtered, the Turkish don’t bother. That’s because they like to keep things simple and frankly, it doesn’t bother them either.

Plus, to avoid sediment, it is better to let the coffee sit for 2 to 3 minutes so that it sits at the bottom of the cup. Another reason why it’s not filtered out is that it’s a fun way to socialize. But how? Well, after everyone’s finished their coffee, they put their cups upside and down. And the sediment or sludge settle in various shapes in each cup.

Then everyone has a go on predicting each drinker’s fortune based on the shape of their cup’s sludge. Sounds like so much fun!

But this sludge contains a high concentration of unwanted coffee compounds like cafestol, kahweol, and caffeine. The FDA suggests consuming only 400 mg of caffeine.

All these high levels can increase your cholesterol levels, give you heart-related issues and cause irregular heartbeat.

Since it’s boiled with finer grounds of coffee and comparatively less water, it’s quite dense and rich. The flavor is very bitter but has a strong aroma. When compared with espresso, it’s actually much stronger.

This unfiltered coffee leads to the sludge getting accumulated at the bottom of the cup. It’s considered to be unhealthy because of highly concentrated compounds of unwanted chemicals. So maybe don’t drink the sludge but I do recommend to do try Turkish coffee.