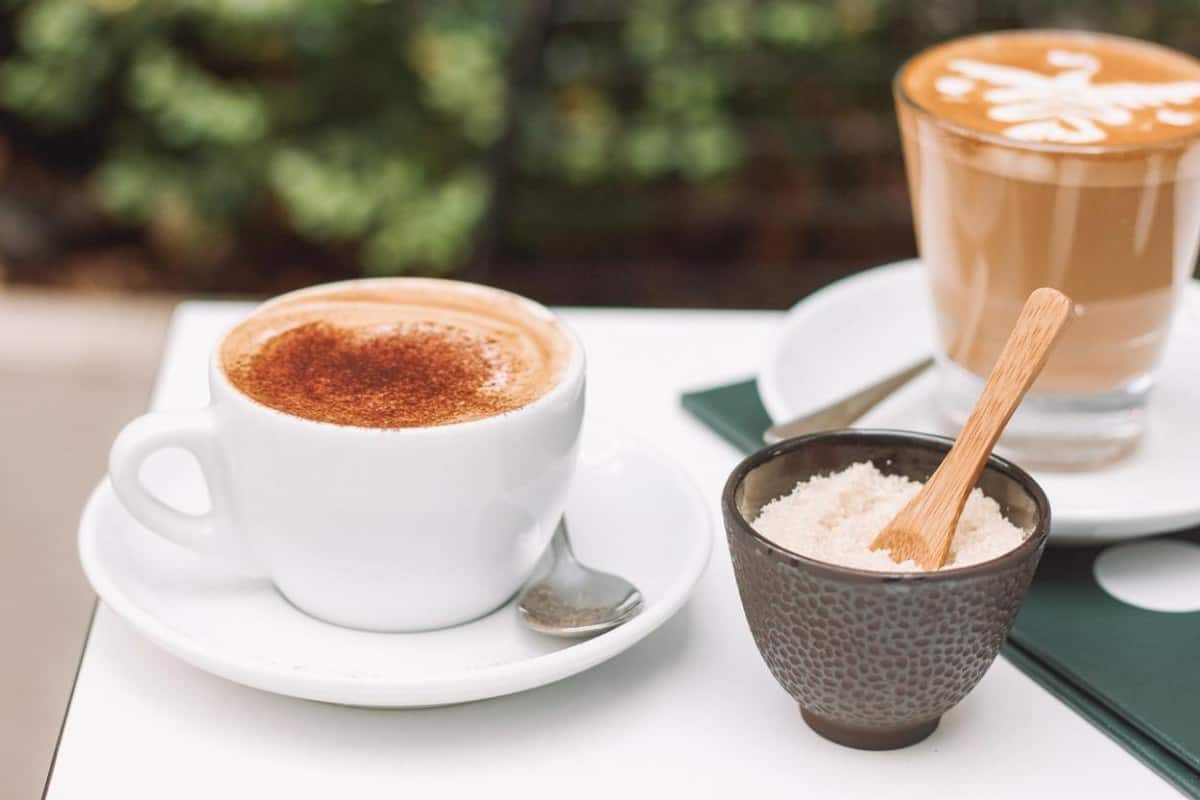 Simply put, sugar enhances the natural flavors of coffee, but too much of it may be harmful to your health.

Suppose you’ve set the aim of being as healthy as possible. In that case, you’re probably aware that adopting minor lifestyle adjustments is key to improving your wellness.

Among them is cutting back on sugary beverages.

Coffee is among the world’s most popular beverages, and as many claims, one of the healthiest.

Sugar in coffee, on the other hand, has the potential to impair those benefits.

This article will investigate sugar in coffee and how it impacts your health, how to reduce its consumption, and offer alternatives you can try.

Is Sugar In Coffee Bad For You?

Having too much sugar in your coffee is bad for you.

Although coffee is beneficial in and of itself, it is pretty easy to convert it into something unhealthy.

Simply add a lot of sugar to it and voila! You’ve got an unhealthy drink.

While cane sugar is not necessarily hazardous, Americans consume way too much of it.

Together with refined grains and starchy vegetables, added sugars make for 42% of the typical American’s daily calorie intake.

Sugar has been linked to various severe illnesses, including obesity and diabetes, owing to its high fructose content.

In fact, according to the International Diabetes Federation (IDF), millions of individuals suffer from diabetes, and is expected to grow in the future.

The main reason is that sugar contributes significantly to calories leading to weight gain and other adverse effects.

Learn more through this video below.

How Much Sugar Should I Put In My Coffee?

According to the World Health Organization (WHO), no more than 6 teaspoons of sugar should be consumed each day.

According to Melanie McGrice, a certified practicing dietitian, the average teaspoon of table sugar has about 16 calories. It probably doesn’t matter in the long run for someone who has a single cup of coffee with a teaspoon of sugar.

That means if you add one to two teaspoons of sugar to your coffee, you’ve already consumed one-third of your total sugar limit for the day.

What Does Adding Sugar To Your Coffee Do?

Adding sugar to coffee sweetens it and enhances its natural flavor.

Coffee’s delicate sweetness comes from inside. Plus, sugar is present in a variety of fruits, nuts, and vegetables.

Coffee beans are the seed of the coffee cherry, a fruit that generates a tiny amount of sugar as it grows.

The natural sugar in coffee beans contributes to their color as well.

Coffee beans are green when harvested. As the natural sugar in coffee beans caramelizes during roasting, they turn from green to brown.

Coffee roasting produces so little sugar that brewed black coffee has only a few calories.

Sugars added to or put in a food or beverage during processing or preparation are added sugars. When you add sugar to your coffee, it sweetens it and improves its natural taste.

Sugar alters the molecular structure of brewed coffee. When caffeine, water, and sugar combine, they work together to mask the bitter flavor that some coffee drinkers dislike.

According to studies, all of the nutrients in coffee, including sugar, contribute to physical health.

Sugar consumed moderately is part of a healthy diet, whether in your coffee or other foods and beverages.

As a reference, the natural and added sugar levels of several varieties of coffee are listed below.

Should I Drink Coffee Without Sugar?

A small amount of sugar in your coffee is okay as long as you don’t overdo it.

However, it is a highly debated topic, and, intriguingly, coffee affects different people in various ways.

If you don’t have diabetes, research suggests that drinking coffee lowers your likelihood of developing it.

In the long run, chronic coffee consumption helps lower the risk of diabetes.

From 1962 to 2000, global use of caloric sweeteners, like glucose, fructose, sucrose, honey, and high-fructose corn syrup, grew by roughly 30%, resulting in an increase in calorie intake of 74 kcal/d on average.

Furthermore, the use of sugar-sweetened carbonated soft drinks, such as those containing caloric sweeteners, has been linked to weight gain, obesity, insulin resistance, and type 2 diabetes.

This is known as the dawn phenomenon.

When you get up and drink a cup of joe, it will raise your norepinephrine and cortisol levels, which will work against whatever insulin you may be taking.

Because coffee affects the way insulin works, your blood sugar may actually increase after drinking it.

Is it simply coffee that does this, or is it also the sugar in the coffee and the creamer?

Caffeine is the primary active ingredient and a single cup of coffee contains up to 100 milligrams of caffeine which is within the recommended limit.

Up to 400 milligrams of caffeine per day is acceptable.

However, you should be aware that even 100 milligrams of caffeine might cause a spike in your blood sugar due to hormonal fluctuations.

Is this something that everyone experiences? Not always, of course.

Like alcohol or any other medicine, everyone reacts differently to it. This relies on how quickly you metabolize or process that substance.

It won’t increase your blood sugar levels as much.

But if you’re a slow metabolizer, the coffee will build as you sip it, causing difficulty for those who complain that their blood sugar is rising.

So, if you’re one of those people whose blood sugar increases after drinking coffee, you should take precautions.

The creamer and sugar both affect your blood sugar. So, watch out!

A little sweetener in your coffee is acceptable as long as you don’t overdo it.

Choose something with low-fat content since fat, particularly saturated fat, can raise blood sugar levels too.

Exercise will help you burn the sugar and regulate your insulin levels.

How Can I Make Coffee Taste Better Without Sugar?

Choose a high-quality bean, gradually reduce your sugar intake, and get used to a minimally sweet drink.

So now you’ve chosen to cut back on the amount of sugar you put in your cup of joe, that’s a good start. But what if you can’t stand the flavor without it?

It’s simple; you just need to opt for a high-quality coffee bean.

Simply drinking a higher grade of coffee is an excellent method to cut down on your sweetened coffee intake.

This way, you’re more likely to remember the flavor without wanting to douse it in sugar.

The simplest method to eliminate sugar from your drinks is to consume it slowly.

In fact, you may do it so slowly that your palate won’t notice the difference.

Your palate will adapt fast and make the process easier by cutting down half a teaspoon of sugar at a time.

If you’re looking for a sugar substitute, I don’t really recommend artificial sweeteners since they basically replace the sweetness you’re already used to.

Which Sugar Is Best For Coffee?

If you can’t imagine life without sugar in your coffee, consider stevia, a natural sweetener.

The genus Stevia, in the Asteraceae family, has around 230 distinct species of annual and perennial herbs, subshrubs, and shrubs that grow primarily in hilly regions, woods, riverbanks, and arid valleys.

Only two of the 230 species, S. rebaudiana, and S. phlebophylla, have a reasonably significant quantity of steviol glycosides (SGs) responsible for the sweet flavor.

Its dry leaves, which contain a high concentration of SGs (7–15%), have been utilized as a natural sweetening agent for hundreds of years.

That said, many countries are interested in S. rebaudiana as an alternative food sweetener.

Some research has revealed the significance of Stevia rebaudiana as a low or noncaloric, non-toxic, and non-mutagenic dietary component.

Stevia rebaudiana production is distributed around the globe, including Canada and particular parts of Europe and Asia.

As a result, using Stevia rebaudiana as a low-calorie alternative to sucrose can create newer natural food sweeteners.

When all is said and done, it ultimately comes down to this principle: moderation is the key to a healthy lifestyle.

While sugar can be beneficial to your health, consuming too much of it can be dangerous. The same is applicable to sweetening your morning coffee.

A little sweetness is acceptable, but don’t go overboard.

As you are informed, you can only consume a specific amount of sugar per day, and exceeding that limit might have negative consequences.

If you frequently make your coffee into a sweet treat, you may be reducing its overall health advantages.

If you want to learn more, read this article which explores the best sweeteners for your coffee.

Short Explanation: Coffee is not a juice but an infusion made when roasted coffee beans are combined with water. Regardless of what type of beverage coffee is, you delve yourself into its aroma,...