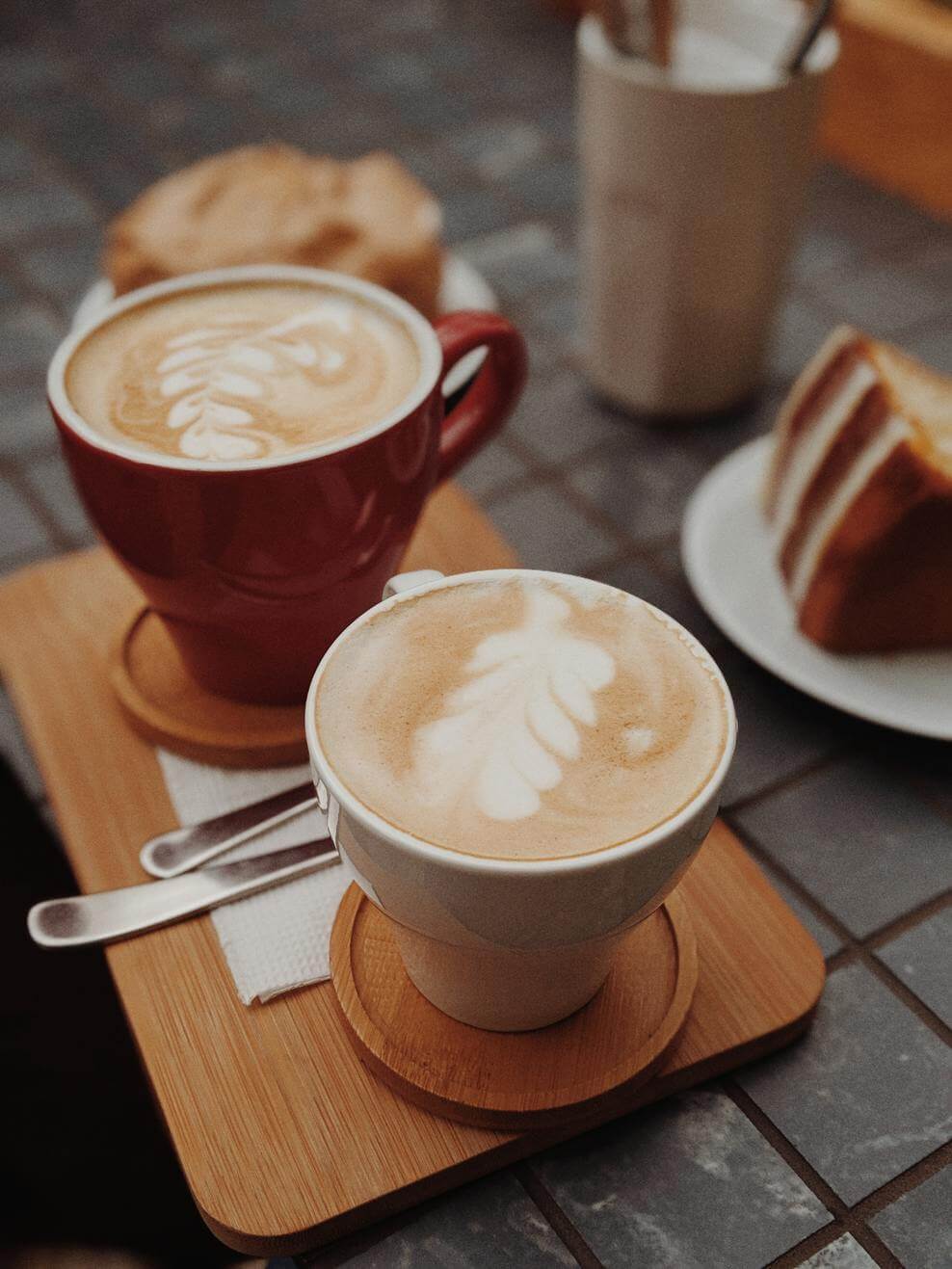 Mocha and latte are both espresso-based drinks containing steamed milk and milk foam. The main difference between these two is that mocha contains a shot of hot chocolate.

The chocolatey flavor of mocha makes it a more sophisticated and indulgent drink but take note – it’s also more sugary.

Latte on the other hand is mild-flavored and basic.

Both of these drinks are said to originate here in the US.

Mocha began as a variant of the classic “caffe latte.”

If you don’t want the full-strength coffee hit in your cup, then a latte is perfect for you. Mocha is a stronger drink with dark chocolate undertones.

In this article, we’ll dive deep into exploring the differences between mocha and a latte.

This mocha vs. latte showdown will analyze the historical overview of each drink, their respective taste profiles, caffeine content, ingredients, calories, and much more, so keep reading!

What is a Latte?

Latte is one of the most popular types of specialty coffee drinks.

It comes from the Italian word “milk,” which seems accurate as milk is a pillar ingredient in the preparation of it.

Latte is a shortened version of the Italian word caffé latte, which means “milk coffee.”

1/3 of latte usually consists of a single or double shot of espresso. The remaining 2/3 of the drink is steamed milk with a small layer of frothed milk at the top.

The combination of these elements results in a perfectly balanced milky coffee that’s visually pleasing because of the coffee art. Don’t forget the milk that gives it an irresistible texture.

Since people have been combining coffee and milk for centuries, the origins of the latte aren’t very clear. However, the silky beverage that we admire today is assumed to stem here in the US, reaching the peak of its popularity in Seattle during the 80s.

Mocha is the shortened form for “cafe mocha” or “mocha latte”. It’s simply a regular latte with some delicious chocolate syrup added to it!

One of the reasons why coffee lovers admire lattes is because it’s easily customized and mocha is a perfect example of this. It has grown in popularity especially among chocolate lovers.

Though mocha coffee beans are said to have a natural chocolatey flavor, mocha that’s made today refers to a combination of coffee blended with milk and chocolate.

Mocha’s ingredients are 4 shots of espresso, 1-4 pumps of chocolate syrup, carefully steamed milk with a little bit of milk foam at the top.

It emerged as a variant of the classic “caffe latte” and has roots as well here in the US.

Do you want to know more about mocha? Read my in-depth post here.

The following table shows a short comparison of both the drinks.

Which has more caffeine?

Although the same amount of espresso is used to prepare both drinks, the difference in their caffeine content is mainly the quantity of milk added to each serving.

A mocha contains as little as 2 oz of steamed milk whereas a latte has an espresso to milk ratio of 1:3 and is considered milk heavy.

In short, a mocha contains a higher amount of espresso per volume and has more caffeine.

If you’re after a cup that can most likely keep you alert, then mocha can be a better option than a latte.

Curious about Starbucks’ blend of mocha and latte? Well if you are, their mocha contains 175 mg of caffeine whereas a latte has 150 mg.

If you like sweetness in your coffee, I highly recommend giving mocha a try.

Though it’s higher in caffeine content, it wins the sweetness battle hands down thanks to the addition of whipped cream, chocolate, and sometimes cinnamon.

Mocha coffee beans are said to have a natural chocolate flavor. And if you’re both a coffeeholic and a chocoholic, that’s hitting two birds with one stone.

Baristas also add a small amount of chocolate to the mocha recipe to enhance the chocolate hit!

Latte is basically a mild and light coffee-based drink.

The mild flavor that latte is famous for is due to the high content of steamed milk added to it.

Chocolate always outdoes milk when it’s about sweetening the strong taste of espresso.

On the other hand, a mocha is generally 2/5 espresso, 2/5 chocolate, and 1/5 steamed milk. The high content of espresso and chocolate in the drink makes it strong yet sweet.

Coffee aficionados are always keen on both the presentation and flavor of their drink.

Though the serving styles of mocha and latte are different in some places, there are widely accepted norms.

Lattes are traditionally served in a white ceramic mug to showcase the layers and the creative latte art.

Mochas in comparison are served in a glass with chocolate or cinnamon sprinkles on top.

Of course, these rules are often practiced in commercial settings. You’re always free to use your favorite or just a random mug or glass when you make these drinks at home.

Coffee is established as a healthy drink according to studies. Both drinks can be considered healthy if taken in moderation. However, it is important to note that they both contain a high-calorie count. If you’re watching your calorie intake, opt for a skim latte instead.

From a health point of view, researchers have repeatedly declared that drinking coffee can help in lowering blood pressure and aiding weight loss.

Coffee has also been studied to:

It’s important to keep in mind that these benefits come from coffee only and not from the 200mls of milk, syrups, and sugar many of us add to our coffee every day.

For a latte, the caloric content depends on the amount and type of milk used in the preparation of the drink. It’s roughly between 150 to 200 calories in each serving.

Comparing a latte to mocha, the calorie count doubles or even triples because of the ingredients used such as chocolate syrup.

Mocha has significantly more calories and carbohydrates than an average coffee. It’s a latte with an additional shot of chocolate syrup.

If you want to enjoy a heavy drink while keeping watch over your calories, go for a skim latte.

A skim latte is a good source of protein and calcium – just 100 calories! You can get your caffeine hit and also satisfy your sweet craving.

Health experts state that adding a shot of anything flavored in your coffee generally adds 2 to 4 teaspoons of sugar per serving. So be mindful of your add ons.

Watch this video to know more about how mocha differs from a latte.

The differences between a latte and mocha are quite straightforward. Though both of the drinks are based on milk and espresso, they have entirely different flavors.

That difference is attributed to the ingredients and ratios added to the drink.

If you have a sweet tooth or are a chocolate lover, simply go for a mocha.

On the other hand, if you prefer a mild-flavored milky coffee, go for a latte.

The caffeine content is also higher in mocha as a greater ratio of the espresso is used to prepare it whereas a latte has a smaller shot of espresso with more amount of milk.

Latte comparatively seems to be healthier than a mocha as it has almost double the amount of sugar and carbohydrates in it.

The comparison between a mocha and a latte only becomes fair if the same type of milk and the same kind of coffee beans are used on both. Tastes usually vary from recipe to recipe and one coffee shop to another.