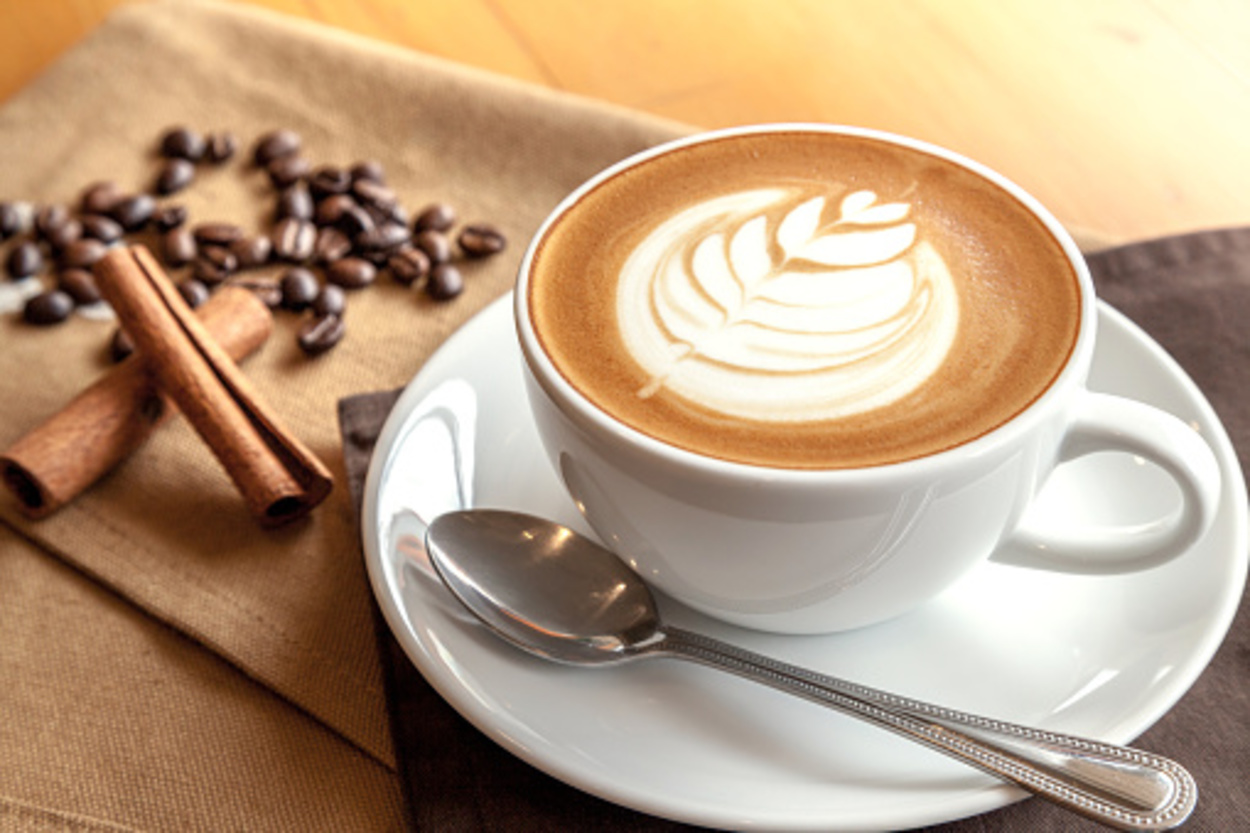 Latte and Flat White are espresso-based and some of the popular drinks of America. But what are they?

A flat white is made of espresso and microfoam meanwhile a latte is made with a single or double shot of espresso, combined with a decent amount of steamed milk. It’s then topped with a layer of foam milk.

In this article, I have got all you need to know about the difference between a latte and Flat white. So stick with me while I go through the nitty-gritty details of both the drinks.

Latte is a type of coffee that’s made with a single or double shot of espresso which is then combined with steamed milk. It’s then topped with a layer of foam milk.

It originated in Italy. The literal meaning of cafe latte is ‘coffee and milk’.

It was invented by Lino Meiorin, a barista from Italy who while working in one cafe in Berkeley, California wanted to give something new to its customers who thought Espresso was strong.

From there, the latte become popular in Seattle, Washington in the 1980s and kept on spreading widely in the early 1990s.

Latte is too much in demand and receives free advertisements through influencers due to Latte Art and because it has a variety of flavors due to syrup options available in cafes, it can range from sweet caramel to spicy like pumpkin and mild like cinnamon.

What Is Flat White?

Flat white is similar to Latte, it has an espresso base with as little foam as possible. Hence the name is flat white.

Flat white has a strong taste of coffee due to espresso, the milk on the other hand has a velvety texture and a glossy finish.

Flat white originated from New Zealand, Wellington in the 1989s. It happened when a barista named Fraser Mclnnes made a cappuccino with low-fat milk and refused to add froth and termed the failed attempt at cappuccino the Flat White.

Flat white is also great for latte art as it has more espresso and less foam. You can read more about flat white in my other article where I talk about this coffee in detail.

Now let’s look into the nutritional values that Latte and Flat white serve.

Here is the table consisting of all the nutritional content that Latte and Flat white has:

The table shows how different Latte and Flat white are in terms of nutrition values.

This is because of the steamed milk and the addition of syrups to the Latte. However, one should always read the nutritional label before consuming any food to keep an idea of the intake values.

A thing to notice is that the nutritional value for Latte is mentioned with a single shot of espresso while the flat white, contains two shots of espresso.

How Do Latte And Flat White Differ?

The only major difference between them is that Latte consists of a thick layer of foamed milk at the top.

While a flat white should have as little foam as possible.

Other than this Latte has a sweeter, creamy rich flavor due to the syrup options and the espresso flavor gets balanced by the addition of milk.

Flat white on the other hand has a strong taste of espresso but with a velvety and creamy texture of milk.

In case you don’t know how to make a flat white here is a simple guide to success:

Now let’s look into the caffeine content between Latte and Flat white.

Caffeine Comparison Of Latte Vs Flat While

Since both drinks are espresso-based we are going to compare both of them under one shot of espresso.

Caffeine is a stimulating agent it stimulates the brain and central nervous system. It is a naturally boosting agent.

Caffeine works by blocking off the adenosine receptors, which makes you feel energized and alert.

This amount of caffeine is good enough to boost your metabolism and help you perform well mentally and physically.

However, one should keep in mind the limit set by FDA, that a healthy individual should have no more than 400mg of caffeine daily.

Exceeding this limit can cause side effects such as:

To avoid all these side effects it’s better to stay put of your intake every time.

If you’re caffeine sensitive, I’d suggest you go for one shot of espresso Latte but if you’re looking for a larger boost then you can go for two shots of espresso.

Now let’s look into the calorie content of Latte and Flat white.

Which One Has More Calories Latte Or Flat White?

Calories determine the energy you will be getting from the food, it gives you energy but it can cause certain weight gain if not burned afterward.

An 8oz latte is considered a small latte and contains one shot of espresso, it has about 94.5 calories.

While a Flat white with a single shot of espresso and only foamed milk contains about 70 calories.

There’s not much difference but it can be difficult for a person to manage if he’s on a weight loss journey or a strict diet plan if one chooses to go for a Latte.

However, if you have an active routine and a daily grind, you can order yourself a Latte to gain back all the energy.

According to the NHS, the total calorie intake daily for women is around 2000 and for men is 2500.

Does Flat White Give You Energy?

Yes! Flat white can give you energy. It contains a shot of espresso which has about 64 mg of caffeine.

This is enough to give you a boost and regulate your mechanism at a much higher rate and help you perform better physically and mentally.

The milk can add up on your calories and help you grind for a longer time.

A normal flat white with two shots of espresso contains 128 mg of caffeine, in my opinion, 50 mg to 150 mg of caffeine is enough to keep you alert and focused for the day.

Which Is Creamier Flat White Or Latte?

LATTE IS CREAMIER! Yes, you read that right, a Latte is way creamier than a Flat white.

This is due to the addition of steamed and foamed milk in the Latte, not only this there is a range of Lattes syrups that you can add to it to make it creamier.

It is due to a syrup option at most cafes that Latte has a high amount of sugar in its formulation, this way if you’re a diabetic you might want to avoid grabbing a Latte.

Are Lattes A Healthier Option?

Lattes can be a healthier option if you’re looking to gain some calories on your end.

For a coffee drinker, this type of nutritional value is a win-win.

Not to forget about the bold flavors that you can opt for in terms of latte and make your drink more aromatic, creamier, and full of flavor.

Is Flat White Cheaper Than A Latte?

According to the Daily Mail UK, people have to pay 20p more for a flat white at cafes like Starbucks.

The only reason that the caffeine magazine could come up with why flat whites are more expensive than latte was because it requires more skill to make it properly.

Latte and flat white both have a base of an espresso.

Latte is topped up with steamed milk and a layer of foamed milk sits on the top which makes the Latte art.

Flat white, in turn, also has an espresso base but it only has a thin layer of foam milk with a velvety and shiny texture.

The difference lies in its quantity and flavor. A latte can bring out its flavors due to the steamed milk and the addition of syrups in it, in terms of quantity a latte has more quantity than a flat white.

A flat white has a strong smell of coffee and a bold taste with some milk.

With that, I hope you now know the difference between a Latte and a Flat white.

Coffee is not only sorted into categories such as dark roast and light roast but if you're familiar with specialty coffee, you might have heard about direct trade and fair trade. However, many...