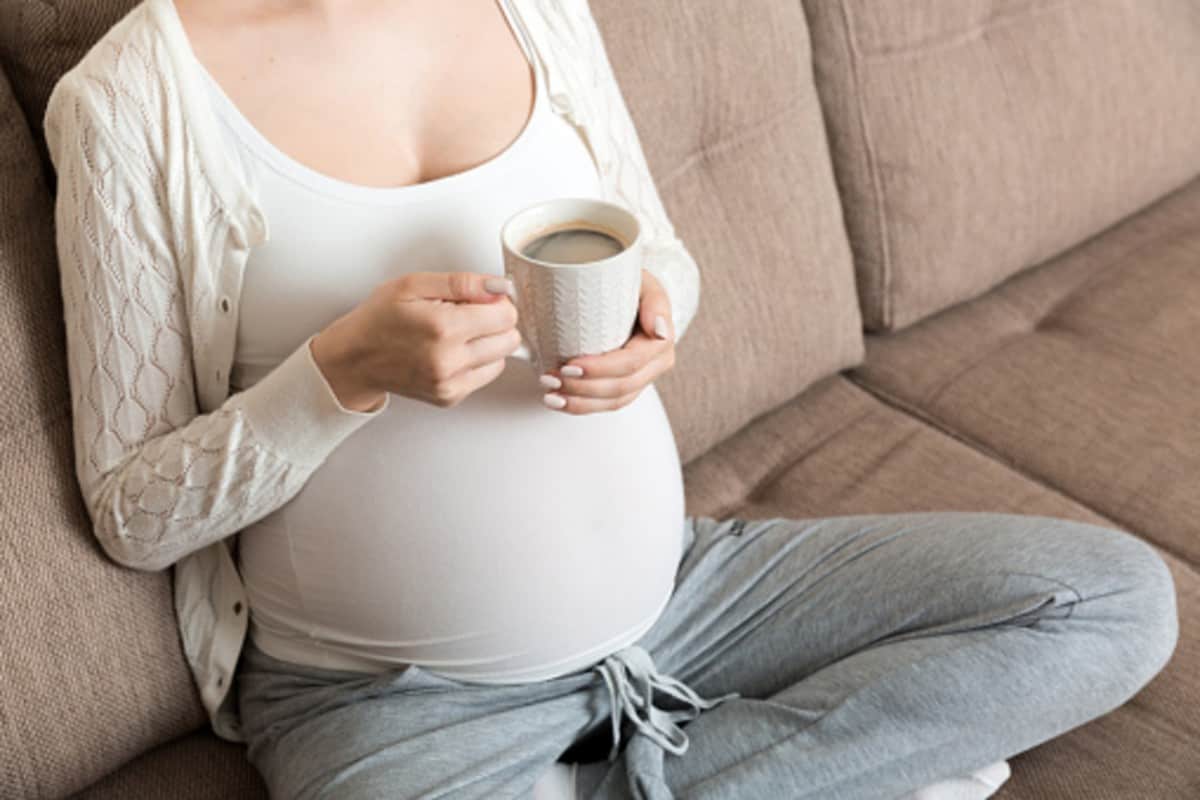 Coffee may not be good for you when you’re pregnant.

In fact, consuming 150 to 200 mg of caffeine per day can result in low birth weight and miscarriage.

When you’re pregnant your body’s ability to break down caffeine slows down resulting in a higher amount of the stimulant in your bloodstream.

And that means the possibility of developing caffeine-related symptoms increases too.

For that reason, you should definitely cut back on caffeinated beverages and food during pregnancy.

And if you really can’t quit, one cup of coffee a day is probably okay! Just a cup and nothing more!

In this article, we’ll dig deeper into the reasons why drinking coffee during pregnancy is not good. Hopefully, after reading through this post, you’ll be more informed.

Let’s get going, shall we?

Is Coffee Safe In Pregnancy?

Yes, but only one cup per day!

The good news is, you don’t have to quit coffee when pregnant but you have to limit your consumption to avoid adverse effects.

The American College of Obstetricians and Gynecologists (ACOG) proposes a caffeine limit of less than 200 mg a day for pregnant women.

Too much caffeine during pregnancy is associated with intrauterine growth restriction (IUGR) or babies being too small for their gestational age.

IUGR is the case when the baby is growing slowly and the expected weight isn’t right for this stage of pregnancy. Also, it is also used to describe babies with low birth weight.

It is believed that pregnant women who ingested more than 200 mg of caffeine a day had smaller babies compared to those who didn’t take caffeine at all.

On the other hand, there are also studies showing that there is no link between moderate caffeine consumption during pregnancy and low birth weight, premature birth, miscarriage, and IUGR.

Still, it’s best to limit your coffee consumption while pregnant to avoid risking your baby’s growth and development.

Is It OK To Drink Coffee While Pregnant?

Drinking coffee in moderation is perfectly safe while you’re pregnant.

“Moderation” in this context means one cup of coffee per day only.

It is highly suggested to limit your caffeine consumption to 200 mg a day which is roughly one cup of coffee depending on the size of the cup.

It takes longer for the body to metabolize caffeine when you’re pregnant which means that the stimulant remains in your bloodstream for a while after your drink it.

When you drink coffee while pregnant, it passes through the placenta and your baby receives it at the end which can potentially lead to pregnancy issues.

Although there are mixed opinions about it, it wouldn’t hurt to just stay on the safe side by limiting your coffee intake or not ingesting anything caffeinated.

How Does Caffeine Affect A Fetus?

Caffeine passes through the placenta and your baby receives it on the other end that could cause miscarriage, preterm birth, and low birth weight.

On the contrary, some studies claim that there is a weak link between caffeine and birth defects and no long-term effects on children in terms of behavior and development.

Keep in mind the baby in your stomach is less able to digest caffeine than you and that also means the fetus will have a similar reaction to the stimulant as the mother.

In that sense, decaffeinated drinks are the best alternatives now that you’re expecting.

Does Drinking Coffee While You’re Pregnant Make Your Baby Hyper?

Drinking coffee while you’re pregnant DOES NOT make your baby hyper.

There is no association between caffeine during pregnancy and hyperactivity or behavior problems in children.

A study published by the American Academy of Pediatrics cited no link between maternal caffeine intake and children’s hyperactivity or inattention problems.

In addition, the results of the study did not involve advising pregnant women to limit their caffeine intake to prevent behavioral problems in their children.

However, there are many other complications that you should take into consideration and that means consuming close to zero caffeine is the safest when you’re pregnant.

What Happens When You Drink Too Much Caffeine While Pregnant?

Ingesting too much caffeine while pregnant increases the risk of miscarriage and low birth weight.

A study published through the International Journal of Obesity mentioned there is a 95% chance of conceiving babies with low birth weight in mothers with high caffeine intake.

Also, pregnant women who consume a greater amount of caffeine than usual are also at risk of giving birth to overweight and obese babies.

So, you better think twice before deciding to drink that tempting cup of joe!

Here are a few coffee drinks that you can still enjoy while pregnant:

Keep in mind the caffeine content of these drinks varies depending on how you made it and where you get it from.

If you’re concerned about the caffeine content of your drinks while ordering from your go-to coffee shop, I suggest you order smaller sizes.

Decaf is a great alternative if you really can’t quit coffee when you’re pregnant.

There aren’t any official guidelines regarding the consumption of decaf coffee during pregnancy but experts advise to drink it in moderation to avoid adverse effects.

You should know that 97% of caffeine is removed from decaf coffee which means that it’s not totally caffeine-free. And that could potentially jeopardize your unborn baby’s growth and development.

I have compiled this list showing the safest decaf coffee for when you’re pregnant:

Moreover, there are coffee brands with detectable levels of methylene chloride and you should keep away from them as they could be toxic to your baby.

Exposure to methylene chloride during pregnancy can harm the fetus by attacking its nervous system.

It is indeed a toxic volatile chemical and long-term exposure in adults can cause liver, kidney, and reproductive toxicity, and cancer.

So, just to be safe, it is wise to look into the decaffeination process of your preferred decaf coffee to ensure that it is safe for pregnant women.

If you’re looking for safe coffee alternatives while pregnant, here are a few good recommendations:

You might have to give up caffeine when pregnant but not sipping a warm drink to help you feel relaxed and calm.

As for the bonus, here’s an easy-to-make gingerbread latte recipe that you can try at home. It only takes 5 minutes to cook and it’s super healthy!

The rule of thumb is that pregnant women shouldn’t consume greater than 200 mg of caffeine per day to avoid symptoms such as headaches, jitters, insomnia, and frequent urination.

Caffeine during pregnancy is associated with low birth weight, miscarriage, and preterm birth. I recommend you look into this matter to ensure you and your baby’s health is safe throughout the pregnancy.

When pregnant, it is essential to be mindful of anything that you consume as it travels to the placenta and your baby is also receiving it.

I am not saying you should quit coffee totally as it’s perfectly safe to drink one cup each day.

Also, if you’re fond of going to fancy coffee shops for your favorite cuppa, I suggest you order smaller sizes to ensure that you won’t be ingesting too much caffeine.

Lastly, always consult your doctor and take care of your health!

link to Iced Coffee VS Cold Brew Coffee (Which is Better?)

There are so many ways to enjoy coffee, no matter the season. Some of you may like to start your mornings with a no-frills hot cup of joe. Others might prefer the sweet, refreshing taste of iced...