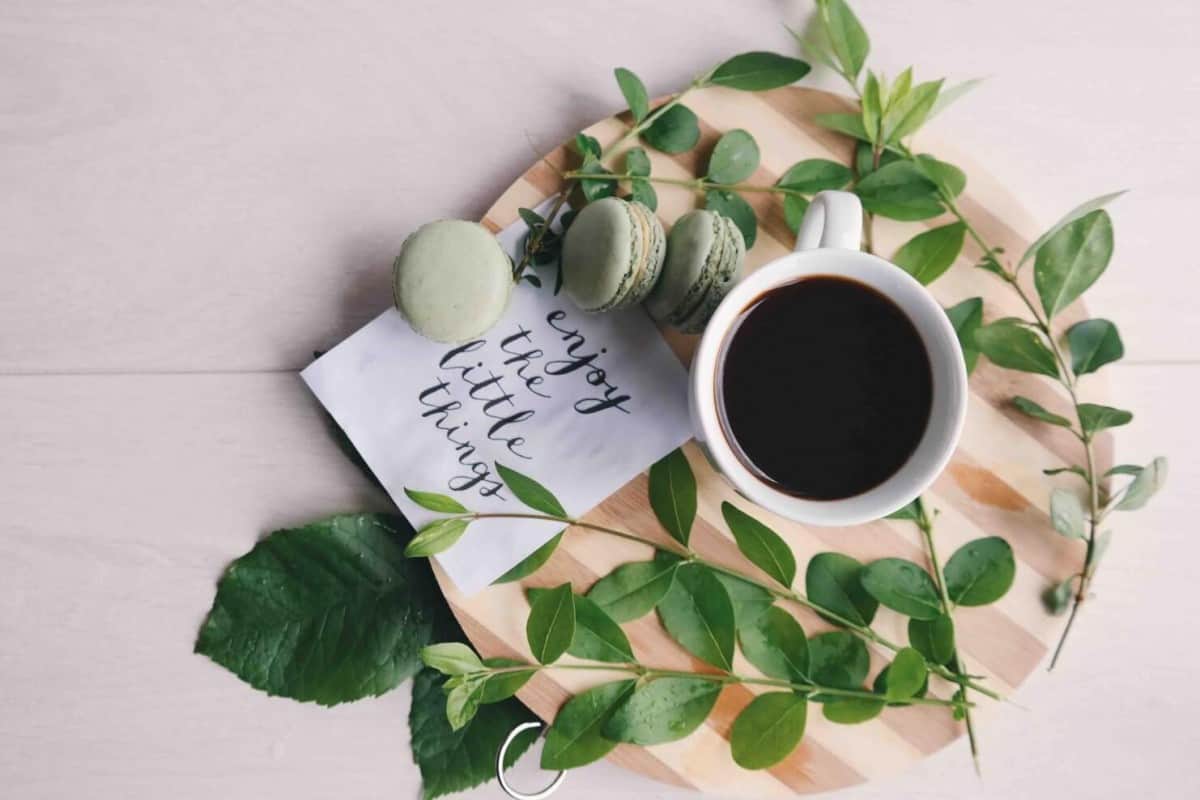 Simplified Answer: No, coffee is not caffeine.

Coffee is a beverage known for its refreshing and stimulating effects. This drink is made by percolation and infusion from the roasted and ground seed of the coffee plant.

On the other hand, caffeine is one of the main ingredients in coffee. It stimulates the central nervous system making you feel more alert, awake, and less tired after drinking a cup of coffee.

In this article, I’ll be expanding your knowledge regarding the differences between coffee and caffeine and provide answers to some of the frequently asked questions you may have in mind.

Differences Between Coffee and Caffeine

For a better distinction between coffee and caffeine, I have created this table for you to look at:

As you can see, there is definitely a huge difference between the two.

Keep in mind the following differences to avoid getting confused between these two:

Moreover, the benefits of coffee and caffeine are somewhat identical, and here are a few of them:

Despite these potential benefits, I strongly suggest drinking coffee or taking caffeine in moderation to avoid adverse effects such as dizziness, insomnia, jitters, and other caffeine-induced symptoms.

In my opinion, yes, coffee can be considered caffeine.

There’s definitely quite a fraction of caffeine in a cup of coffee which means that it can be safe to assume that coffee can be partly considered as caffeine.

How Much Caffeine is in a Regular Coffee?

A regular cup of coffee contains 95 mg of caffeine but that amount might increase due to the brewing time.

For instance, a typical 16 oz. cold brew has 200 mg caffeine and iced coffee of a similar serving stands at 165 mg caffeine.

Clearly, cold brew has a higher caffeine concentration and the reason for this is the brewing process uses more coffee which makes the brew more potent.

Here’s a table showing the average caffeine content of other coffee variations:

The good news is, most of the coffee variations mentioned are within the level of recommended intake. You won’t be at risk of overdose after consuming a cup or two.

For reference, the FDA proposes a caffeine intake of 400 mg per day to be safe.

There are many other chemicals found in coffee such as tannins, carbohydrates, proteins, antioxidants and many other essential nutrients.

With that said, you can’t really categorize coffee as pure caffeine because it’s loaded with many other components.

For example, tannins are the compound in coffee that makes the drink bitter which also binds with other nutrients and minerals easily. Antioxidants such as polyphenols and hydrocinnamic acids are found in coffee too.

As you can see, you can’t really say coffee is pure caffeine!

Which is the Stimulant, Coffee or Caffeine?

Coffee is not a stimulant, caffeine is!

According to the Alcohol and Drug Foundation, stimulants are a class of drugs that speed up the messages between the brain and the body and enhance your physical performance, making you feel more energetic.

Caffeine is a naturally occurring substance that stimulates the nervous system and helps elevate drowsiness. And yes, coffee is one of the biggest sources of caffeine!

People usually consume coffee to jumpstart their day and to keep the energy while performing daily activities.

It is the presence of caffeine that increases the functionality of the body while drinking coffee.

However, the overall health benefits obtained from the drink are entirely not due to the presence of caffeine.

There are several antioxidant and anti-inflammatory properties of the other supplements in coffee that promotes health benefits.

So, do not be confused as to which one between coffee and caffeine is the stimulant!

Is Coffee or Caffeine Bad?

Both are safe if the consumption is kept in moderation.

Caffeine and coffee are both beneficial to your health. There are science-backed studies proving the benefits of coffee and caffeine to overall health.

Generally speaking, these are the benefits of consuming caffeine and coffee in moderation:

Still, you should keep in mind to limit your coffee/caffeine consumption to the recommended limit.

So, you better not overindulge!

Is Brewed Coffee a Pure Substance or a Mixture?

Coffee is a mixture!

As you know, a pure substance is any substance that is made up of just one kind of building block. When we are seeing whether a substance is pure or not, we look at its molecular level.

In coffee, there are over thousands of chemically bioactive compounds such as caffeine, caffeic acid, chlorogenic acids, trigonelline, diterpenes, and melanoidins. Not to mention all the other components that would be present depending on the variation of coffee you would consume.

Thus, when coffee is brewed it forms more compounds which also dissolve the coffee beans making your beverage taste even more distinctive and delicious.

Are Coffee Grounds a Pure Form of Caffeine?

No, coffee grounds are not a pure substance and thus not a pure form of caffeine.

Coffee is actually made up of multiple compounds, such as proteins, oil, caffeine, tannins, carbohydrates, cafestol, acids, and more. The chemical compositions of these various components differ greatly depending on the species of the plant and the environment in which coffee is grown.

Clearly, coffee serves as a caffeinated source but not the substance in its pure form itself.

Advantages and Disadvantages of Caffeine in Coffee

We are given a choice of whether or not we get caffeinated or decaffeinated coffee. In making the decision, we try to inform ourselves of the advantages and disadvantages of both.

Caffeinated coffee has both advantages and disadvantages.

Let’s start with the benefits first which include:

Now if you look for drawbacks then there are certain points that need to be mentioned.

As caffeine is a drug, you need to intake a safe amount so that it doesn’t disrupt any physiological function in your body. This is the reason why too many cups of coffee are discouraged by doctors.

Some major disadvantages of caffeine include:

But don’t worry too much about these side effects as long as you consume caffeine or coffee responsibly, you’ll be fine!

Check out this video to learn more about the benefits, uses, and side effects of caffeine!

How Much Caffeine is Too Much?

Most people can safely consume up to 400 mg of caffeine as suggested by the FDA and reviews in the National Library of Medicine.

This article from sleep.org suggests that 200 mg of caffeine will be enough to produce the desired effects of caffeine.

The regular brewed coffee contains less caffeine but can tremendously increase if you are going for a grande coffee from Starbucks.

Grande coffee drinks from Starbucks will eventually contain a higher amount of caffeine due to their additive contents.

On average, a regular cup of coffee may contain around 80 to 100 mg of caffeine per 8 o.z serving as estimated by FDA. However, the concentration of caffeine will depend on the type of drink you are consuming and the method of preparation for the beans.

For example, a single espresso or espresso-based drink contains 63 mg whereas a decaf coffee contains about 2 to 3 mg of caffeine.

Generally, the amount of caffeine you can ingest depends on your body type, age, level of activity, and health.

Just to be safe, limit your intake!

Is There More Caffeine in Coffee or Tea?

The amount of caffeine in both of the drinks may vary depending on the flavor you are consuming, origin, and the method of preparation of the drink.

Technically, a cup of brewed coffee will have more caffeine than a cup of tea. This is also because you’d use more coffee beans for the preparation of the drink compared to tea leaves.

For reference, an 8 oz serving of green tea has a caffeine content of between 30 to 50 mg. The same serving of regular black coffee contains 80 to 100 mg of caffeine.

Which is the Better Caffeine Source: Coffee or Caffeine pills?

However, both are popular choices for many people. If you are sensitive to caffeine, then you should go for coffee since you can dilute the drink according to your tolerance.

A single caffeine pill contains about 200 mg of caffeine giving you a quick energy fix after ingestion. This much caffeine can be too much for someone and may cause anxiousness, rapid breathing, and tremors.

Also, caffeine pills are stronger and are likely to give you the worst side effect than drinking a cup of coffee.

For that reason, coffee is the better source of caffeine for me.

How Bad is Caffeine?

Caffeine consumption is generally considered safe but if you are obsessing over the drink beyond limits, then it can have a toll on your body.

Addiction Center confirms that the severity of the addiction to caffeine may lead to disruption of normal life and affect the individual’s day-to-day functioning.

Simply put, caffeine is bad if you are over-consuming it.

The word ‘bad’ is relative since the tolerance and physiological responses of the body differ from individual to individual.

So what is bad for me might work simply good for you.

If your body is showing severe effects from abdominal pain, seizures, or increased blood acid levels, it’s time to cut down your intake levels and go for healthier options like herbal or chamomile tea.

Due to the difference in the metabolism and weight of the bodies of teens and adults, the caffeine intake for the two groups is different.

Experts from Health Agenda Nutrition advise that teens between 14 to 17 age may drink a little amount of coffee but the intake should not exceed 100 mg per day.

American Academy of Pediatrics suggests that children and adolescents should not consume any caffeine-containing foods. This causes disruption in their sleeping pattern and makes them prone to caffeine-related symptoms.

Medical Daily reviews that the restlessness or insomnia created due to caffeine consumption in adolescents may hamper the process of brain maturing and limit their ability to learn, concentrate and understand.

So, it is best to educate your teen on coffee consumption to avoid these nasty side effects.

Coffee is not caffeine but a dietary source of caffeine. Unlike caffeine, coffee is a complex mixture of different types of bioactive compounds.

Today coffee is the most popular source of caffeine that also provides health benefits. Caffeine in coffee works as a drug and provides an intense feeling of alertness through its consumption.

However, the antioxidant and anti-inflammatory properties found in coffee can’t be solely credited to the caffeine content since decaffeinated coffee provides similar health benefits as well.

So, don’t be confused between caffeine and coffee as these two are entirely different things!

link to Does Coffee Zap Your Energy? (The TRUTH About Coffee)

Coffee does and can fuel your body. It gives you a quick boost of energy. However, that energy boost tends to be temporary if you depend too much on coffee to gain energy instead of getting...