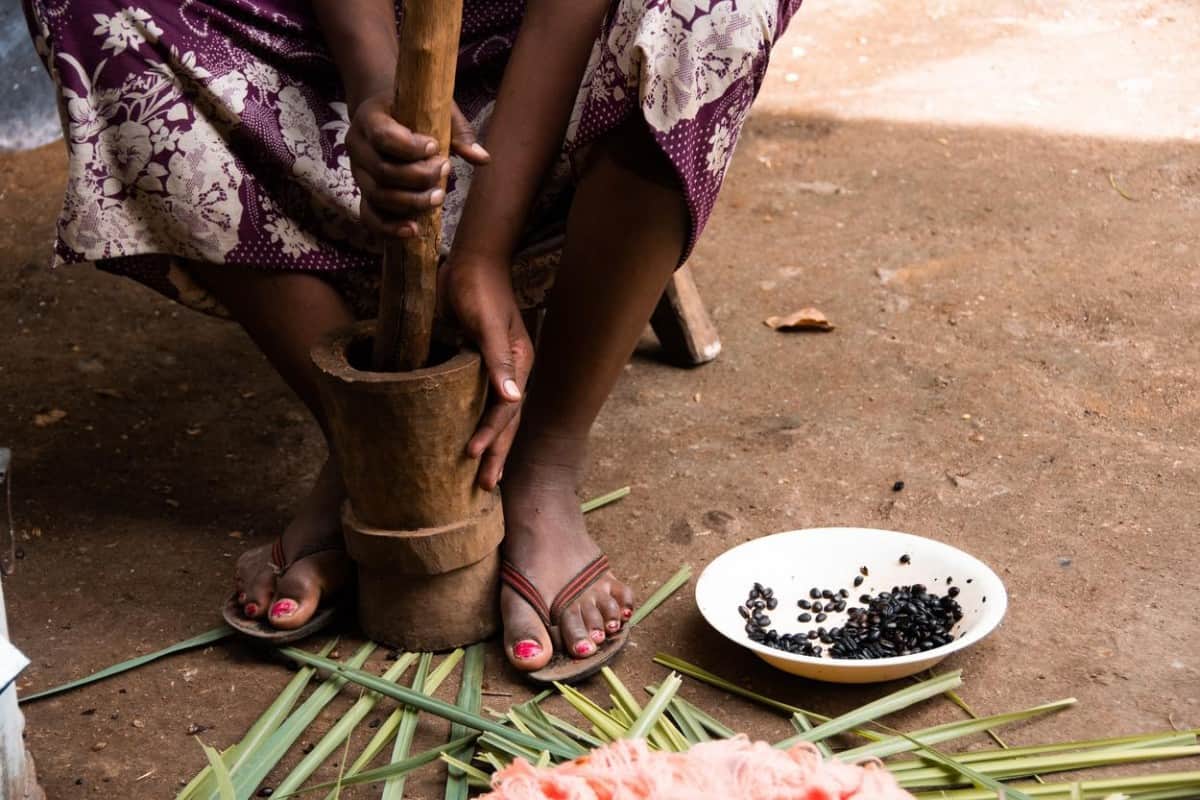 Ethiopia is the home of coffee, and its myriad of heirloom variations distinguish its unique origin.

Heirloom coffee is a compound phrase for several naturally occurring types of coffee found in Ethiopia.

If you are a coffee enthusiast, you have probably heard of Ethiopia which is thought to be the birthplace of several coffee varieties.

But have you ever stumbled across the term “heirloom” while scanning the menu at your favorite coffee shop?

If you’re intrigued about this, keep reading because this article will explain all you need to know about it and more!

What Is An Heirloom Coffee?

Heirloom coffee is a compound term for the various wild or genetically unidentified coffee varieties.

As you might expect, with coffee, the variety indicates the sort of coffee cherry from which the beans are derived.

Suppose you see the words Caturra or Maragogipe on your coffee bag which refer to some of the many coffee varietals found across the world.

And if you read about Ethiopian coffee cultivation, you’ll come across the term “heirloom.“

The Oxford English Dictionary defines an heirloom as “a valuable object that has belonged to the same family for many years.”

The word refers to older varieties of the Coffea arabica plant in the coffee industry.

Meanwhile, in Ethiopia, the term “heirloom” is commonly used to refer to local types, many of which are still present in the wild today.

While an accurate explanation of the word is hard to discover, it is used as a catch-all term for the nation’s numerous wild or genetically undetermined types in Ethiopia.

It is believed that Ethiopia now has around 10,000 and 15,000 heirloom varietals, the vast majority of which have not been properly genetically classified.

Although many heirloom varietals originate as wild plants, a few are eventually taken to different specialty coffee farms around the country to be nurtured, harvested, and processed.

These unique and rare varietals offer an excellent chance for third-wave coffee enthusiasts to explore new and unexpected tastes.

They are regarded for their authenticity and intensity of taste, so coffee enthusiasts are actively hunting for these purebred beans.

Some coffee farmers are reinstating long-forgotten bean varieties to their soil. They’re starting to recover ground that has been planted with man-made hybrids.

Although being lower-yielding and more challenging to care for than modern hybrids, heirloom coffee plants have thrived in places like El Salvador.

What Does Heirloom Varietal Mean?

The term “heirloom” refers to an old varietal of a food plant.

Some believe an heirloom cultivar has to be over a hundred years old, while others suggest five decades.

Then others identify heirloom plants as being from around 1945, when hybrids were first introduced, or 1951 when hybrids became more common.

Within the coffee industry, the word heirloom refers to types brought to Latin America and Asia over a century ago, including numerous African coffees, notably from Ethiopia.

The term heirloom was coined in Ethiopia during the specialty movement.

Specialty coffee consumers who were unfamiliar with the types of Typica and Bourbon labeled everything as an heirloom.

Ethiopian local producers, on the other hand, have specific names for different coffee plants.

Specialty consumers distinguish Ethiopian coffees by location, altitude, and cupping score, and not by variety.

There are around 40 types.

Regional landraces, on the other hand, are coffee beans that grow naturally in Ethiopian woodlands.

Since a landrace is a regionally adapted, traditional variety, it is a more suitable phrase to use than heirloom varieties.

So, this implies that when a buyer buys a bag of Ethiopian coffee and sees the type classified as an heirloom, the beans are a mix of more than 10,000 kinds.

Identification Of Heirloom Varieties In Ethiopia

Ethiopia is said to be the coffee’s birthplace.

There are various qualities among Ethiopia’s numbers of distinct heirloom varieties, including yield, cup quality, taste profile, and disease resistance.

After identifying a variety, they will then label it. So, varieties are now called depending on the year they were found and the number order they follow.

Traceability in Ethiopia’s supply chain is improved by recording this data and marking these varieties.

While Ethiopia has over 10,000 distinct kinds, cultivating any of them at scale may be challenging. Each type has its own needs and is frequently best suited to a particular region of the country.

The majority of these varieties are unverified and have not yet been grown commercially.

In Central and South America, a few heirloom breeds are making a return.

Craft roasters pay top price for these beans, which have names like Pacamara, Gesha, and Caturra and are regularly recognized in international coffee contests like the prestigious Cup of Excellence.

Recognition of heirloom coffee is still in its early stages, but it is believed that it’s going to be the new big thing.

Here are some heirloom varieties to look for:

Ethiopian heirlooms offer a banquet of diversity since its environment naturally supports these types.

Want to learn more about Ethiopian varieties? Watch this video below.

Significance of the Generic Term “Heirloom”

In Ethiopia, it is believed that there are around ten thousand coffee types. Because of this massive amount, there hasn’t been enough genetic testing to allow consumers to differentiate one kind from another.

Because of the spontaneous cross-pollination in the wild, the title “Ethiopian Heirloom” exists as an overarching term to cover all varieties.

This is what makes Ethiopian coffee such a mystery. Each village may have a distinctive variation, each with its own distinct features.

Ethiopian heirlooms have a floral and fruity profile in general, although the particular qualities vary significantly from place to place.

Since Ethiopian heirlooms are so distinctive, mixing rather than distinct types can significantly alter the cup profile.

Some of the coffees sourced, for example, will have floral overtones.

But, if we combine that one type with others, the resulting mix might have delicate floral notes in the beginning and fruity aftertastes.

When processing heirloom varietals, like with any coffee, caution should always be considered.

To emphasize the distinct qualities of each particular type, washed and natural processing, as well as fermentation experiments, could be used.

When it comes to roasting, if you want to bring out the exquisite qualities of an heirloom coffee to make a floral cup, roast it quickly.

Concerns Regarding Heirloom Coffee and Varieties

For a relatively long time, we’ve referred to the Ethiopian coffee types as “Heirloom Coffee” or “Heirloom Varieties.”

This is a general term in the industry. It seemed like a suitable means of showing the variety of coffee kinds available there and the less urbanized approach to farming.

However, it is not always a practical term.

The concern with wild heirloom varietals is that they are just that: wild.

Ethiopian producers are robbed of transparency and the potential to earn a better revenue since the diverse kinds are not recognized.

It is challenging for farmers and roasters to recognize and distinguish variations in the wild. Still, pickers and producers can better separate each variety on the farm.

Growers generally recognize heirloom varietals based only on years of expertise. The vast number of variations makes genetically verifying them on a larger scale almost unattainable.

Growers go from farmer to farmer to identify and understand each variation within the heirloom species. Although this is a time-consuming effort, it allows growers to exchange expertise and, as a result, collect data on only a few of the hundreds of Ethiopian heirloom varieties.

On the other hand, consumers are deprived of the opportunity to sample new and unique flavors since it is unclear which type is available.

It’s a brilliant read, classifying coffee variations observed in different regions of the nation and kinds produced inside the country to assist growers in dealing with issues such as disease in their coffee plantations.

The book presents a compelling point that the term “heirloom” is inappropriate.

In this regard, the term is very ambiguous and ill-defined.

It fails to represent the whole picture of how the cultivars we adore have been picked, refined, and distributed through time by farmers and groups for their beneficial qualities.

Heirloom might possibly apply to a wide variety of coffee types that have never been labeled as such.

Information on which kinds are included in a specific lot has always been challenging since traceability is difficult in Ethiopia, contrary to many other coffee-producing nations.

As a result, farmers can’t immediately explain what’s in a lot since the information wasn’t collected efficiently.

Advantages of Heirloom Coffee and Varieties

The growing popularity of heirloom varietals is helping Ethiopian farmers.

As the business progresses, a greater emphasis on data collecting will naturally aid growers in learning more about these wild types.

This provides producers with additional information about their variety for potential consumers. It also helps them be more consistent over time.

This, in effect, will lead to increased traceability, which will facilitate communication and strengthen relationships along the whole supply chain.

Ethiopia has a unique place in the hearts of many coffee lovers.

The blend of those fragrant and distinctive coffees, as well as the history of coffee grown there, makes it a one-of-a-kind place.

In the long run, we hope that other roasters will join in demanding more information on the types that constitute Ethiopian coffee.

We now know that heirloom coffee is a compound term for many wild or genetically undetermined variants.

One perk is that the increasing prevalence of heirloom varieties is also benefiting Ethiopian farmers.

But, this term is not always appropriate since Ethiopian producers are deprived of transparency and the opportunity to earn more income because the many types are not recognized.

We are optimistic and thrilled about the possibility for greater Ethiopian coffee exploration in the future years.

So, go on, keep exploring the world of heirloom coffee!

link to 3rd Wave Coffee (What exactly is it?)

Third Wave is a term for the goods of a coffee industry comprised of cafes and other coffee enterprises. It was launched sometime between 2000 and now and has a common goal which is to provide...

Continue Reading
link to What is Single-Origin Coffee? (Fun Facts)

In brief, single-origin coffee is a specialty coffee that is sourced from a specific producer, crop, or region in a specific country. As you know by now, that's how the terminology...