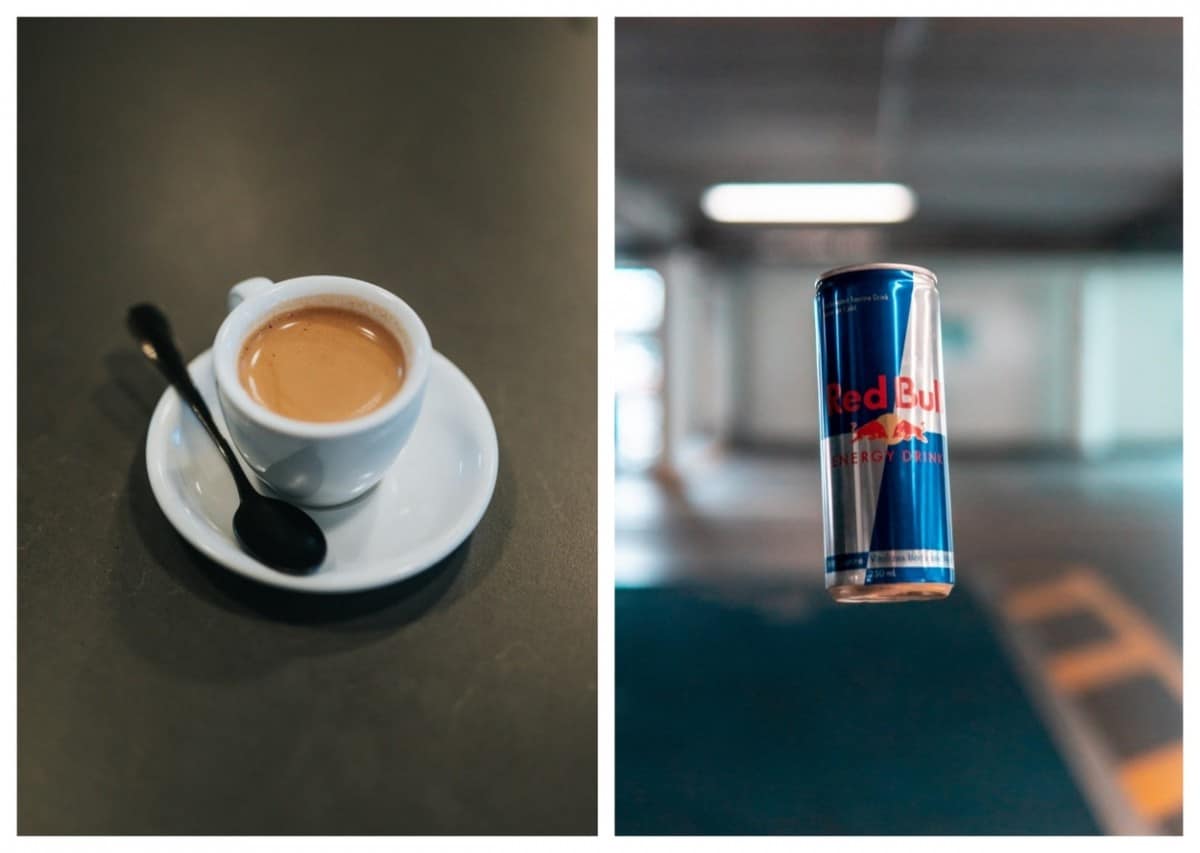 Both drinks contain a lot of caffeine, but espresso has a much higher caffeine content of 77mg per 1.5 oz compared to Red Bull’s 14.2mg per 1.5 oz. espresso is also considered much healthier, but when it comes to the range of flavor, Red Bull takes the win.

Every once in a while, everybody needs that extra boost of energy. Most people consume coffee like espresso early morning to give them electrifying alertness and reduced drowsiness.

Energy drinks like Red Bull are usually consumed during midday or late afternoon as a pick-me-up drink to regenerate that kick from the morning and maintain the frequency of their daily tasks.

Did you know, Red Bull is of one the top-selling energy drinks around the globe? It’s a well-loved drink just like coffee.

But you might be wondering, which is better between the two? Or, what is the content of each of these drinks?

Keep on reading as I’ll navigate through both of their pros and cons, caffeine levels, their respective features, etc.

Red Bull is a man-made energy drink that contains caffeine and has many flavors. Espresso is a natural energy drink made of roasted coffee beans.

Espresso is made on roasted coffee bean grounds. You brew tightly packed coffee grounds with hot water and the concentrated coffee concoction is an espresso shot.

This espresso shot is used as a base for making other coffee like Mochas or Cappuccino by adding milk or sugar or an Americano by only adding more hot water. Some people drink this straight up. It’s all about preference when it comes to coffee.

Whereas Red Bull is a totally different kind of drink yet it does have the same effects. Red Bull is an artificial energy drink that is non-acholic and contains caffeine.

It’s a stimulant that provides a much-needed kick of energy especially to athletes and young people who need that extra push while working out or getting through the day.

It tastes sweet and sometimes metallic because of the caffeine. Red Bull also contains vitamins and minerals that are good for your body.

Espresso is stronger than Red Bull. The reason being, that it is a much more concentrated and powerful shot of coffee containing large amounts of active ingredients.

Though the quantity varies on the serving size and on the fact that anything like milk or water is added or not. But typically, it’s served straight up in small shots.

Red Bull on the other hand is not as strong. Though it contains high levels of caffeine and active ingredients, it’s less potent than espresso.

If you’re interested in knowing about the strongest wake-up juice there is, you can read my other article to find out.

Espresso is much healthier than Red Bull. Not only does espresso carry a lower calorie count than Red Bull, espresso also carries the many health benefits of coffee which Red Bull doesn’t. That said, Red Bull contains a few vitamins that espresso does not have.

Espresso has many health benefits that you can reap without any additives like dairy or sugar. But keep in mind moderation is the key.

Do not overdose on it just because it’s healthy for the body. Otherwise, it can damage your health with irreversible effects. Espresso contains many antioxidants that help remove deadly toxins from your body.

It strengthens your immune system and pushes your limits for physical activities. Regular but small amounts of consumption can also protect you from many diseases like type 2 diabetes, Alzheimer’s, and Parkinson’s.

Red Bull does give your body adequate amounts of vitamins and minerals, but it contains many artificial sweeteners which are not easily absorbed by your digestive tract. This can lead to an upset stomach and bloating.

Red Bull has also been found to cause an increase in blood pressure.

You might think that sugar-free Red Bull can be a savior here. But no, that’s not the case. Sugar-free Red Bull has less sugar but the rest of the ingredients and their respective effects stay the same. Therefore, espresso is healthier than Red Bull.

Watch this video for a better understanding.

Which Has More Caffeine?

It’s advised not to consume more than 400 mg of caffeine in a day. If you drink more than the advised limits, the caffeine can create some serious issues for you. Though both of them contain a much lesser amount of caffeine per serving than advised, espresso is more caffeinated than Red Bull.

Pros And Cons Of Each Drink

Each drink has its own pros and cons. Espresso is all-natural while Red Bull is made artificially.

Espresso and Red Bull both have their own pros and cons. I have made a table for you to first know the exact contents that each of them contains before discussing the benefits and negative effects each drink holds.

Now that you know the content for each drink, let’s discuss the pros and cons of espresso first.

Espresso in limits has many benefits to offer which help improve the overall health of your body. They include:

Espresso consumed in small quantities does no harm. But, if you’ve lost track of how many shots of espresso you consumed in a day, it can lead to negative effects like:

Now let’s discuss the pros and cons of Red Bull. It has fewer pros and more cons.

Red Bull is widely popular around the globe, especially among young people. Its benefits are:

Though Red Bull is a great source of vitamins, it isn’t that good for you if you drink it every day. Its negative effects include:

Espresso is bitter meanwhile Red Bull Original is sweet and a bit citrus-like.  There are no other flavors for espresso but Red Bull has many flavors like Watermelon, Tropical Fruits, Coconut, and Berry.

Espresso is very sharp yet bitter in taste. It has a lot of tartness because of the way it gets brewed.

All the coffee compounds are jam-packed therefore resulting in this lemony and bitter-tasting concoction. But if espresso is used as a base for making any other drink, you can make it sweet with sugar or syrups and less tart with cream and milk.

Red Bull, on the other hand, has a sweetness to it. The regular Red Bull can taste like coffee to some people because of the caffeine. But its general flavor profile has some tartness with cough syrupy vibes.

But unlike espresso, it has other flavors to offer. Each flavored offered has its own unique respective taste. You can choose any flavor to try if you don’t like the original Red Bull.

Red Bull and espresso both have caffeine in them and provide that instant energy boost to our bodies. But in the long run, I think espresso is much better than Red Bull.

It has many great benefits to offer, unlike Red Bull. With the long-lasting caffeine effects of espresso, you can easily use it as a base for other lattes or cappuccinos if you feel like switching things up.

Lastly, Red Bull is not bad to drink but does not offer as many benefits as espresso.

Plus, young people get hooked on it and crave Red Bull much more than espresso. So, just drink both of these under limits and you shouldn’t face any health-related problems. Drinking in moderation for both these drinks is the key to maintaining a good balanced life.