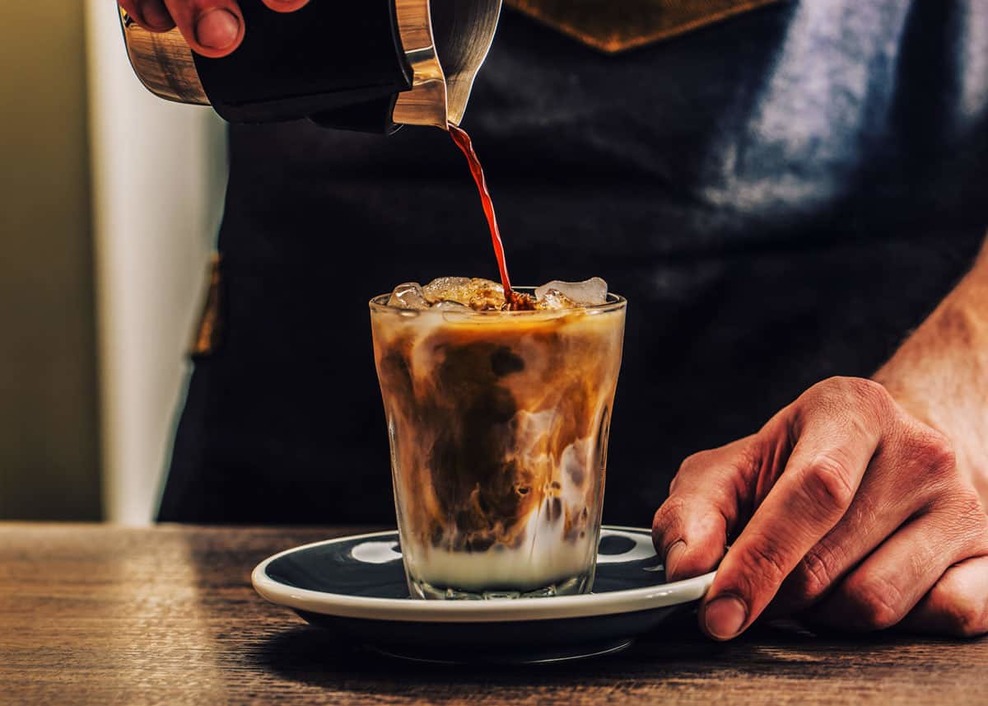 Short Answer: Double Cold Brew Coffee is a type of coffee that’s brewed with coffee instead of water at cold or room temperature.

Sometimes a single shot of coffee is just not strong enough to charge you.

For an even stronger cup of coffee, you can always go for double brewing it.

Though I wouldn’t suggest it to use daily, a cold brew prepared from cold brew could be just the caffeine jolt you require to kickstart an extremely sleepy morning.

When we talk about coffee, picking the right beverage needs an order of operations. Everyday grogginess, for example, can be combated with a regular cup.

If something more is required, an espresso shot can do the trick. But if everything fails, double cold brew’s extra strong jolt can save your day.

Have you ever tried a cold brew made with cold brew?

Keep reading the article to know everything related to double brewing your coffee.

What Is Double Brewing Coffee?

Double brewed coffee can either mean:

It becomes a little difficult to brew coffee twice because coffee becomes a lot more finicky once it’s prepared. If you brew it too much, it brings out quite a bitter flavor, and even though the resulting coffee will certainly be stronger, it would surely not taste as good.

The other challenge is how to brew the coffee a second time. You might assume it to be as simple as passing it through a coffee machine again, but that’s not the case.

Most of the coffee makers are not designed to run coffee through their pipes and tanks – and even if they can, you still get the issue of the strange aftertaste.

The second option tends to be quite easy – just use double the amount of grounds (24-30 grams instead of 12-15 grams for a single serving) and your coffee will automatically become stronger.

You can watch the following video to know more about double brewing your coffee.

If you’re not familiar with double brewed coffee, take a look at a previous post of mine. Double brewing your coffee has numerous benefits like:

Double brewing means double the caffeine. An extremely strong mug of double-brewed coffee means you obtain a jolt of caffeine running through your system – for some people, it’s the exact burst that they require to get going or finish something big such as an overnight study session or project.

However, for others, the caffeine may be too overwhelming and they may find themselves jittery or irritable with such a high dose of caffeine.

Double brewing also refers to extracting double the flavor – if done properly, of course. If you don’t brew it perfectly, you will end up with doubled unpleasant flavors (for example excessive bitterness).

The stronger flavor – when done properly – is the most useful for making iced coffee.

Since the flavor is stronger, you can put ice in the drink without the worry of the ice diluting the coffee to the point of becoming watery and tasteless. Even a shot of milk can be added, and the coffee will yet taste like the strong drink you love.

So in the peak summer months, when you crave a cold, refreshing iced coffee with a strong flavor, a double brewed iced coffee is a great pick me up.

Also, most iced coffees are diluted with milk, ice, and other flavorings and thus, most of the coffee flavors tend to lose in a single brew. By double brewing your coffee, you’ll still get a strong flavor even after all the added flavorings.

If you don’t have an Aeropress or an espresso machine but still want to drink specialty coffees such as lattes and cappuccinos now and then, you can go for double brewing your coffee to emulate the bold flavor of espresso.

Then you can just dilute the powerful double brewed coffee with foamed milk in whatever ratio you like, whether it’s for a latte, cappuccino, macchiato, or any other coffee you like.

The following table summarizes the benefits and drawbacks of double brewing your coffee.

What Happens If You Double Brew Cold Brew Coffee?

If you brew cold brew coffee twice, the coffee becomes over-extracted, and the flavor turns bitter.

Usually, this occurs when you reuse the coffee grounds instantly. I would not suggest you make a second coffee cup with the same coffee grounds that are used a few minutes earlier.

The second brew would most likely come out as astringent and quite bitter in flavor.

Reusing the coffee grounds drains out the flavor, and you barely get the taste and aroma that you expect from a good cup of coffee, that’s why it’s recommended not to brew coffee grounds more than two times.

As a coffee aficionado, you might not appreciate the outcome that you will get by reusing the coffee grounds. So it is better not to have a high expectation from the drink as you might end up sorely disappointed.

Can You Use Coffee Grounds Twice for Cold Brew?

Yes, coffee grounds can be used twice for preparing a cold brew!

But you should keep in mind that the flavor of the first coffee brew would be much richer and more powerful than the second. The first brew will also be much stronger in terms of caffeine than the reused coffee grounds.

It’s better to reuse the coffee grounds with a cold brew than any other brewing method as you can still get a satisfying drink, but still not like the first brew.

When you use the fresh coffee grounds for the first time, it gives out all the complex flavors, aromas, and oils. The second brew does not have much to offer.

How To Make A Double Cold Brew Coffee?

Steep coarsely ground coffee beans in water overnight. Strain the resulting liquid the following day to produce a rich, smooth concentrate which is to be diluted with either milk, water, or cream.

Secondly, allow the first batch to chill overnight and then pour the resulting cold brew into a Mason jar, add in fresh grounds, and repeat the process all over again, using the undiluted concentrate of the first batch as the liquid for the second brewing.

The result is a drink strong enough to overwhelm the taste buds. It might also taste quite bitter, which is probably an inherent hazard of using pre-made coffee to make more coffee.

Double-brewed coffee is amazing because you get to enjoy a very powerful drink by brewing coffee grounds with coffee.

On hot summers, double cold brew coffee can give you just the right dose of energy that you require.

It’s also worth trying double-brewed coffee on days when you need more caffeine than usual. It can be a lifesaver if you need to work a double shift or cram for an exam.

Although it’s completely safe to drink double cold brew coffee, you should avoid it if you’re caffeine sensitive, and you should keep track of your caffeine content. A healthy adult can safely consume up to 400mg of caffeine per day.

Also, never drink it before going to bed as the increased caffeine content may lead to problems of falling asleep.