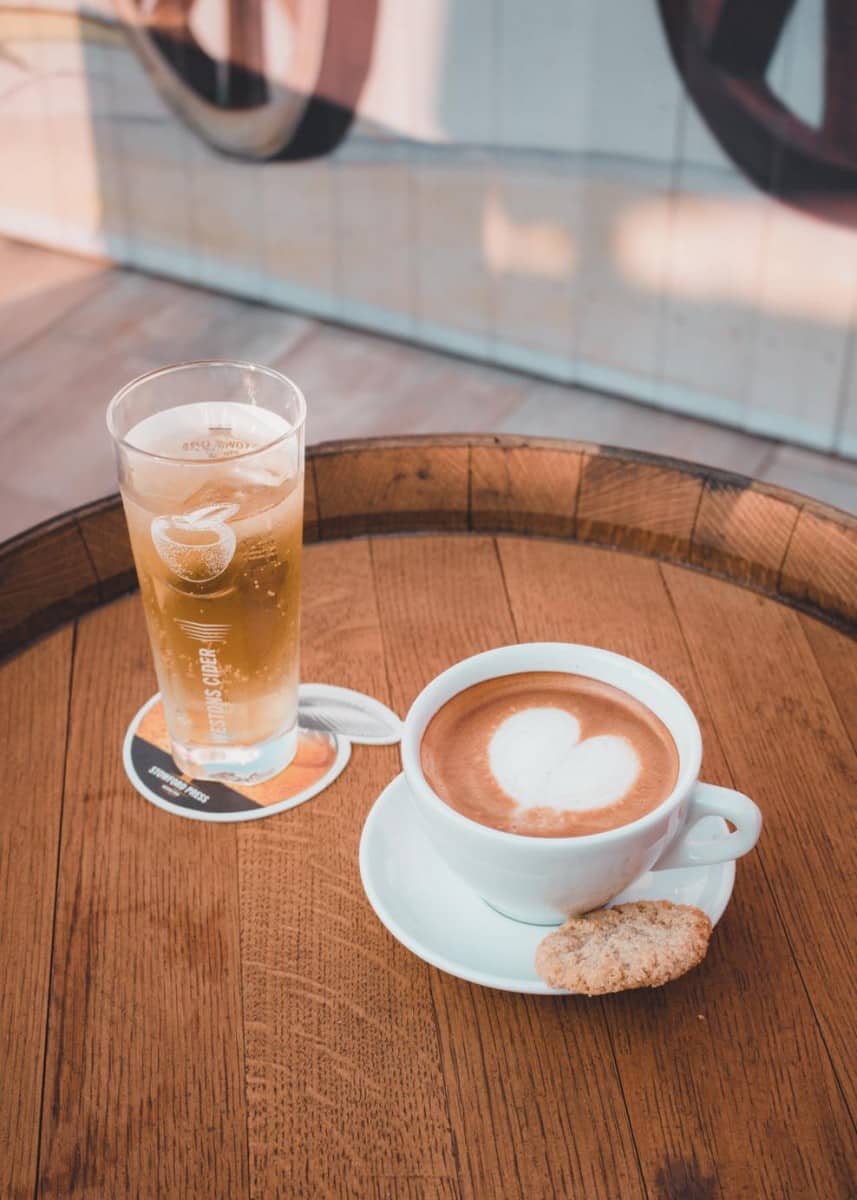 Quick Answer: Coffee itself does not contain alcohol.

Coffee is a brewed beverage made from ground coffee beans. It is a part of culture, economy, and most of all passion.

There are many ways to prepare coffee using various bean varieties. Also, you can roast beans to your liking, and use several brewing methods.

If you go to a nearby coffee shop, you will most certainly be overwhelmed by the choices.

Coffee is likely to yield satisfying results no matter how you prepare it.

What is the most excellent way to enjoy a cup of coffee? That, of course, depends on your taste.

You may have heard of espresso martini which is a combination of vodka, espresso, and coffee liqueur.

So yes, you can definitely add some booze to your coffee drink to spice it up a little.

However, for this article, I’ll be answering the query – does coffee contains alcohol?

For example, a regular cup of black coffee is made using water and coffee. No alcohol at all!

In addition, alcoholic substances are not used in the process of making or growing coffee. So, coffee really does not contain alcohol!

However, you can add alcohol to your coffee, and there are various easy to make coffee cocktail recipes that you can follow.

And my absolute favorite is the Colorado Bulldog! It resembles the taste of white Russian which is another favorite of mine.

To sum it up, coffee itself has no traces of alcohol but you can add some booze to your regular cuppa to make it more interesting and enjoyable.

What Are Coffee Cocktails and Coffee Liqueurs?

While coffee liqueur is a form of alcoholic beverage that has been made to taste like coffee. Plenty of sugar is added to balance out the alcohol’s sharp taste.

The amount of alcohol in a coffee liqueur varies depending on where it was made.

Most coffee liqueurs have lower alcohol content since many people prefer to savor the smell and taste of the coffee flavor, but it is definitely an alcoholic drink.

If you want to try making coffee liqueur at home, here’s a video you can check out:

So, if you want your coffee to have a solid kick to it, add coffee liqueurs to your cup of joe.

What Happens When I Mix Coffee With Alcohol?

Coffee contains caffeine, a natural stimulant that can disguise the depressant effects of alcohol, making drinkers feel more awake than they really are.

As a result, you’ll consume more alcohol and become more intoxicated than you probably realize which puts you at risk of addiction and alcohol poisoning.

The FDA issued a warning to businesses that make alcoholic beverages with coffee in 2010, claiming that the caffeine was a harmful addiction to these drinks.

The 2015–2020 Dietary Guidelines for Americans caution against mixing alcohol with caffeine.

Both alcohol and caffeine are diuretics, meaning they cause you to urinate more frequently. As a result, combining caffeine and alcohol may lead to dehydration.

In general, it is advisable to consume coffee and alcohol separately, but it is also not that harmful when taken in moderate amounts.

You can still enjoy an occasional cup of hot white Russian coffee as long as you are aware of its alcohol and caffeine content.

Now let’s find out the answer to one commonly asked question: is drinking alcohol and coffee bad?

Is Drinking Alcohol and Coffee Bad?

It has been shown that consuming more than three alcoholic drinks each day has a direct and harmful effect on the heart.

Heavy drinking can lead to high blood pressure, alcoholic cardiomyopathy, congestive heart failure, stroke, especially over time, and increases the amount of fat in the body.

Clearly, there is a connection between alcohol and cancer. In fact, excessive alcohol use is responsible for about 93,000 deaths in the United States each year and $249 billion in economic costs in 2010.

Excessive drinking can cause livers to become inflamed in heavy drinkers. In which case, liver cells die and are replaced by scar tissue, resulting in cirrhosis.

On the other hand, coffee contains caffeine that affects your digestive tract and triggers gastrocolic reflex and if consumed excessively, it has the potential to damage your stomach lining.

In addition, coffee contains chlorogenic acid and N-alkanoyl-5-hydroxytryptamine, among other acids, which cause stomach acid production which trigger damage in the digestive tract.

As a result, you may experience belching, bloating, and stomach upset.

However, the bottom line is, drinking both coffee and alcohol in excessive amounts is the root of all problems.

In other words, it is the addiction to both coffee and alcohol that causes adverse effects.

Is Coffee Worse Than Alcohol?

Without a doubt, alcohol is more harmful than coffee, but it still depends on the amount you consume.

The only drink that is good for you to have on a regular basis is water, but still, any health expert will strongly advise you to limit your inatake.

So, if your alcohol intake is in modest amounts, you should have nothing to worry about.

Coffee is definitely less harmful than alcohol because the only concerning thing it contains is caffeine which is a natural stimulant that helps in keeping you alert.

While alcohol affects not only your physical health and mental wellbeing, most people are not sensitive to caffeine and could go on drinking coffee without experiencing any unhealthy effects.

You’ll be perfectly fine as long as you stick to the recommended intake which is 400 mg per day.

So what is the safest alcohol intake?

Well, that depends on a variety of factors.

The National Institute on Alcohol Abuse and Alcoholism (NIAAA) set the following threshold for moderate drinking:

One standard drink in the US contains 14 grams of pure alcohol which is found in regular beer, wine, and distilled spirits.

Does Coffee Count As a Drug?

Coffee itself don’t count as a drug but the caffeine in coffee is a psychoactive drug.

Caffeine can be defined as a drug that increases alertness by stimulating the central nervous system. Caffeine boosts mood and offers most individuals a short energy boost. However, it is not harmful to most unless taken in excessive amounts.

Although caffeine addiction is not a formally recognized disease in the “Diagnostic and Statistical Manual of Mental Disorders (DSM-5),” the book does address a few caffeine-related problems, such as intoxication and withdrawal.

Still, you should watch out for these caffeine-related symptoms:

You should be aware that the stimulating effects of caffeine can occasionally induce physical symptoms that resemble with other illnesses.

If you are being evaluated for any condition that may be caffeine related, it is critical that you tell your doctor how much caffeine you are consuming.

If you are experiencing these symptoms after lowering your coffee consumption, you might be facing withdrawal and should consult your doctor right away.

Does Coffee Sober You Up?

No, coffee does not sober you up.

Caffeine has no impact on the liver’s metabolism of alcohol; therefore, it has no effect on blood alcohol levels or impairment due to alcohol intake.

Caffeine in coffee increases alertness, while alcohol makes you drowsy.

Caffeine is a stimulant that can help you stay alert, but it does not influence how quickly alcohol is broken down.

As a result, while the common perception that coffee sobers you up may appear to be truthful due to caffeine’s propensity to make you more awake, the belief is nothing more than a mere myth.

Sobering up with coffee should be avoided because caffeine can actually make individuals think they’re sober enough to drive, which can be risky.

To Sum It All up

To summarize, coffee is an alcohol-free beverage.

People add alcohol to the coffee of their own volition to give it a boost.

If consumed excessively, this combination of coffee and alcohol can be detrimental.

Coffee and alcohol are highly addictive and can lead to a variety of health problems.

Alcohol is more harmful than coffee, but it still depends on the amount you consume. Coffee is less harmful than alcohol because of the caffeine.

However, taking both alcohol and coffee, whether in combination or separately, does not have to be harmful if done in moderation.

If you keep an eye on how much you’re consuming, you might be able to reduce the negative impacts on your health.

Now, go and enjoy you delicious cuppa in moderation!