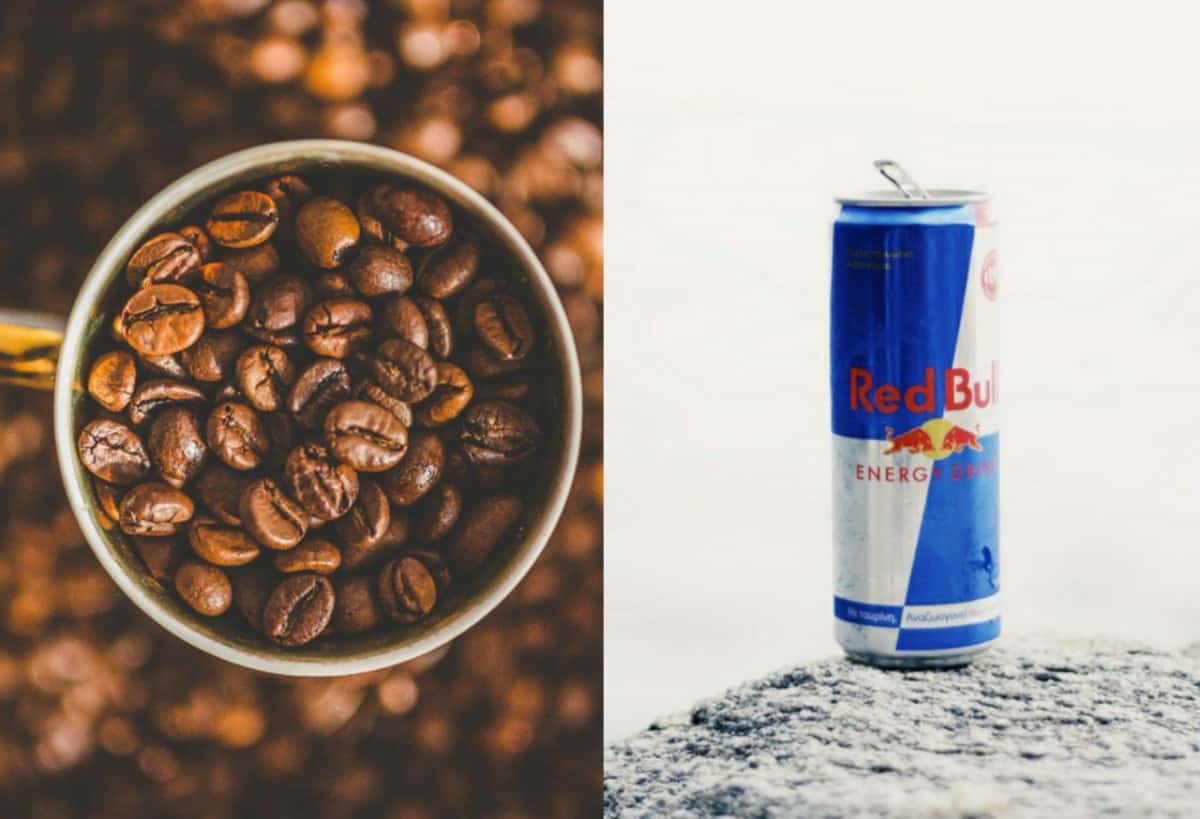 In brief, Red Bull and coffee are both loaded with caffeine that gives you energy expected to last for a few hours.

Caffeine, the world’s most used stimulant, is the element that boosts energy, helps you feel alert and focused, and improves your mood.

Caffeinated drinks are the all-time favorites of people of all ages. However, children, pregnant women, and breastfeeding mothers should be careful around caffeine.

For this post, we’ll compare and contrast Red Bull and coffee to help you make an informed decision of which one is best for you.

Both coffee and Red Bull have an almost equal amount of caffeine per serving, though coffee is ahead of Red Bull by a little margin.

The amount of caffeine in coffee usually depends on factors, like the type of coffee bean, roasting style, and serving size. Usually brewed coffee contains 96 mg of caffeine per cup of 240 ml.

The caffeine content of coffee is different in different coffee brews and also varies from packaging to packaging.

A lot of coffee brands have introduced their coffee to the market promising more than 1000 mg of caffeine per 12 fl. oz such as the Black Label Coffee.

But on average, a cup of coffee contains about 95 mg of caffeine and comparing that to Red Bull’s 80 mg, there isn’t that much difference.

What Is A Better Stimulant? Coffee Or Red Bull?

Between coffee and Red Bull, coffee is a comparatively better stimulant than Red Bull.

Caffeine stimulates the nervous system and increases alertness, brain function, and energy level. The more caffeine a drink has, the stronger its stimulating effect is.

A standard can of Red Bull offers 70 to 80 mg of caffeine, whereas coffee contains 96 mg or more. So in this regard, coffee is the better stimulant.

Coffee’s effects last about 3 to 5 hours and take 30 to 60 minutes to reach the bloodstream. The stimulation of Red Bull is shorter than coffee, lasting around 1 to 4 hours.

To get a better idea of the difference between coffee and energy drinks, watch the video below.

What Makes You More Jittery? Coffee Or Red Bull?

When the question arises whether coffee or Red Bull makes you more jittery, the answer is coffee.

Caffeine affects the nervous system by suppressing the adenosine receptors in the brain. Because of this, you don’t feel fatigue and your heart rate and blood pressure increases.

Jitters are a side effect of too much caffeine and usually manifest as shaking, loss of focus, and a change in mood.

In this case, since coffee has more caffeine, it’s more likely to cause jitters than Red Bull.

The sugar you put in your coffee can also have an effect on your blood pressure and energy levels. With that said, you may want to consider alternative sugar-free and calorie-free sweeteners like Xylitol and Stevia.

Regular Red Bull has less sugar and they also have sugar-free options that have zero calories.

How Many Coffees Is A Red Bull?

One Red Bull can is equivalent to 1.27 cups of espresso coffee.

Red Bull contains about 80 mg of caffeine per standard can and one-shot espresso or an average cup of coffee has 63 mg of caffeine.

Normal brewed coffee contains 96 mg of caffeine, which leads to one cup of brewed coffee that is approximately 1.2 cans of Red Bull.

The Comparison of Nutrients Between Coffee and Red Bull

Coffee is a naturally processed caffeinated drink made from roasted coffee beans and Red Bull is an artificially made energy drink that comes in various flavors.

This table breaks down the nutritional content of coffee and Red Bull.

As you can see, Red Bull contains various vitamins and minerals which are all good for the body.

Coffee contains healthy components too and with lesser additives compared to Red Bull. And I think that makes this beverage a better choice!

To see which one really is better for your health, keep reading!

Is Coffee Or Red Bull Better For Your Health?

Because coffee is more natural, it can be considered healthier than energy drinks.

Coffee at its purest contains no additives like creamers or milk. Meanwhile, energy drinks are loaded with artificial flavors and sweeteners that may have adverse side effects.

Studies found that daily 3 to 5 cups of coffee can prevent you from acquiring various types of cancers, heart and liver diseases.

It is known that coffee prevents diseases like Alzheimer’s and dementia and it also decreases the risk of developing level 2 diabetes.

In that sense, coffee is definitely better for you health-wise!

Coffee Or Red Bull for Studying?

Coffee and Red Bull are both good for studying, but I believe coffee might be the ultimate winner.

As they both contain caffeine, they will give you the energy boost you need for studying.

In addition, they also fire your brain up to improve your focus and memory.

Because coffee has higher caffeine content, its effects will also last longer. It can energize you for 3 to 5 hours, while Red Bull is expected to last 1 to 4 hours.

So, coffee it is for studying!

The table below discusses the basic differences between coffee and Red Bull:

Why Red Bull Is Bad For You?

Red Bull is bad for you because it is linked to various side effects such as abnormal heart rhythm, caffeine overdose, kidney problems, and bad teeth.

It increases heart rate and is also associated with hypertension. Drinking a can of 355 ml Red Bull can increase heart rate and blood pressure within 90 minutes up to 24 hours of consumption.

Red Bull can also cause caffeine overdose and possible toxicity when consumed in large quantities. I’d say drinking more than 5 cans of Red Bull a day increases your chances of suffering from caffeine OD.

Bear in mind the recommended daily caffeine intake is at 400 mg for healthy individuals. That means drinking more than 5 cans of Red Bull daily is definitely crossing the daily caffeine limit.

Moreover, long-term consumption of Red Bull can also lead to poor oral health due to the high acid content of such a beverage.

Also, think about this:

Red Bull contains high sugar and that means frequent and excessive consumption can lead to kidney problems too.

That said, you should tread lightly when consuming this beverage!

At the end of the day, coffee seems to have more to offer than Red Bull.

While they both contain caffeine, coffee is still a better choice as it doesn’t contain additives compared to Red Bull.

But keep in mind that caffeine even in tiny amounts may affect you, so always be aware of how your body responds to the stimulant.

I suggest you go for drinks with moderate caffeine content to avoid system shock.

Still, you can surely enjoy both coffee and Red Bull as long as you adhere to the recommended daily limit.

Cheers and drink in moderation!

link to Does Coffee Go Bad? (Truth Behind Coffee Expiration)

In brief: Coffee doesn’t go bad unless it’s kept in a humid environment. There are several ways to store coffee for it to last longer and stay fresh. You're clearing out your pantry and...

Continue Reading
link to Iced Coffee VS Cold Brew Coffee (Which is Better?)

There are so many ways to enjoy coffee, no matter the season. Some of you may like to start your mornings with a no-frills hot cup of joe. Others might prefer the sweet, refreshing taste of iced...