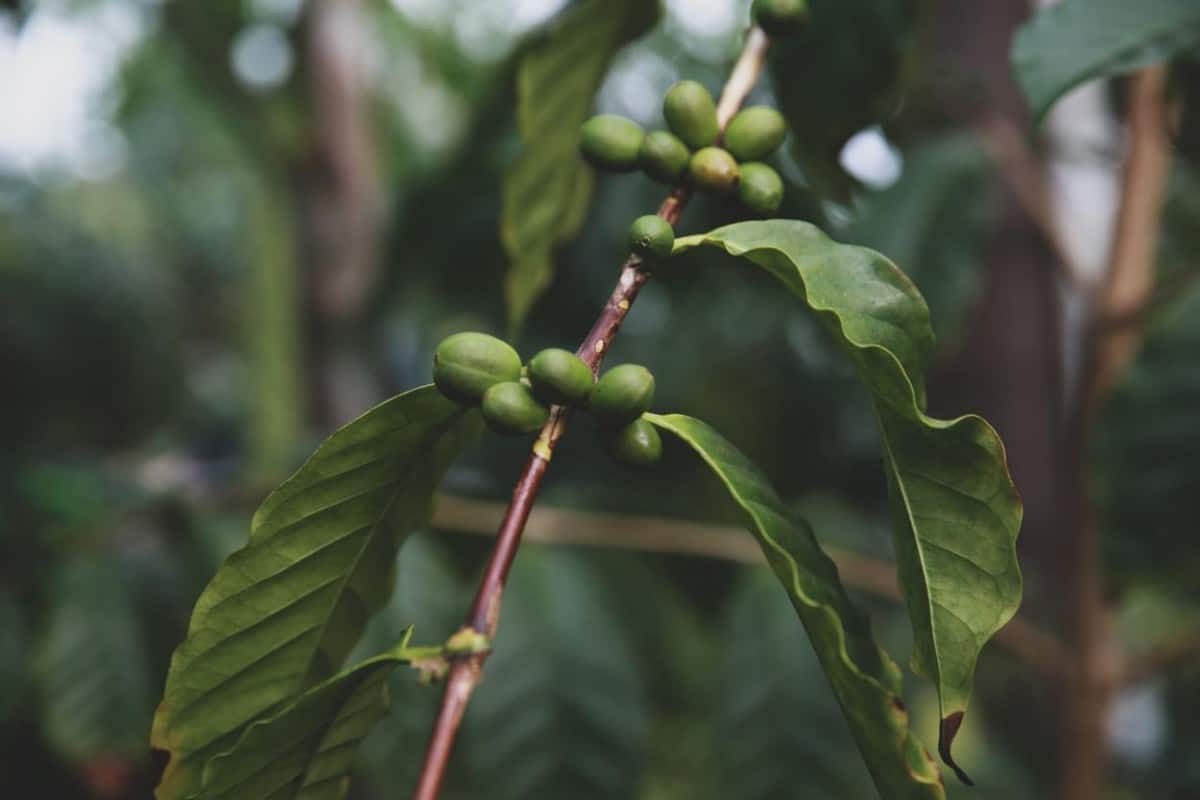 The coffee leaf, due to its abundant bioactive compounds, has a lot of potential uses and applications, one being the production of coffee leaf tea.

Most of us have a good idea of what our everyday cup of joe is made from.

But have you ever thought about what happens to the rest of the coffee plant and its byproducts?

Coffee leaves are among those that are usually disregarded by many consumers perhaps due to a lack of understanding of what they are actually capable of.

This article will offer you fascinating facts and information about coffee leaves.

For a considerable time, the leaves of coffee plants were being used to produce tea-like beverages.

Green is the color of the glossy, waxed leaves on the side of the main stem of the coffee plant.

Young leaves of some species can be bronzed-tipped and green or dark-green while maturing, but never brown, unless when stressed or when leaves fall.

C. arabica leaves thrive for 8 months and C. canephora leaves for 7 to 10 months until they reach a length of up to 15 cm.

Let’s look at the benefits that you can potentially gain from coffee leaves.

Coffee leaves have a rich history of usefulness, which includes many health benefits.

Here are a few examples:

Natural polyphenols are vital dietary antioxidants that have a positive impact on your health.

Coffee and tea were found to contribute significantly to the dietary intake of such antioxidants in a variety of populations.

Across several coffee-producing countries, such as Ethiopia, South Sudan, and Indonesia, coffee leaves are often used to produce infusions.

Contrary to the extensive study on green beans, there have been comparatively fewer investigations on the metabolic content of certain parts of the coffee plant, including the leaves, the exterior fleshy layers of the fruit, or vascularized organs.

Coffee leaves are commonly used as ethnomedicine and tea beverages by natives from coffee-growing regions.

Because of the abundance of bioactive compounds: alkaloids, chlorogenic acids, and xanthones from coffee leaves, there has been a spotlight on its health benefits to humans.

In a study, the findings showed that the botanical origin of the samples, and their maturity, have a substantial impact on the antioxidant content.

Likewise, the range of chlorogenic acid concentrations in young leaves (35.7–80.8 mg/g dry matter) was found to be equivalent to that found in green coffee beans.

C. pseudozanguebariae Bridson has been investigated for its leaf phenolic content in addition to Arabica and Robusta coffee.

This species’ fruit, green beans, and leaves had high levels of feruloyl quinic acid (FQA) esters, and a C-glucosyl xanthone, mangiferin, was extracted from the leaves.

If you don’t know what these are, I got you!

These compounds, which were first isolated from the mango leaves, bark, and peel, are widely recognized for their various pharmacological properties, including anti-inflammatory, antidiabetic, antihyperlipidemic, and neuroprotective qualities.

In addition, the beverage made from coffee leaves is said to aid in the treatment of various ailments, including anemia, intestinal pain, and fever.

Consequently, the use of coffee leaves to prepare tea has surfaced as an efficient commercial goal.

The nutritional benefits of the active chemicals in coffee leaves have increased the popularity of coffee leaf tea.

There are several production methods for making coffee leaf tea prior to actually preparing the drink. The majority of them include leaf steaming, rolling, and drying.

Some producers, though, work in a protective gas environment to keep the ingredients from oxidizing.

Coffee leaf tea is comparable to green tea in flavor, although it is more earthly and sweeter.

In terms of central nervous stimulation, the presence of caffeine in coffee leaves makes coffee leaf tea an alternative to typical tea drinks.

Due to the similar quantities of chlorogenic acids, which are twice as great as in roasted coffee, the findings suggest that coffee leaf tea could offer health benefits comparable to green coffee beans.

Other Uses of Coffee Leaves

Coffee leaves are being investigated in a number of potential applications, in addition to their use as food:

Do Coffee Plant Leaves Have Caffeine?

Yes, the caffeine content, particularly in C. arabica leaves, ranges around 1.8 and 3.2 mg/g in mature and young leaves, respectively, and varies significantly with age.

Caffeine is coffee’s most prevalent and significant alkaloid. Despite its flavor, this alkaloid contributes to less than 10% of the bitterness in coffee.

Caffeine contributes to coffee drinks simply as a stimulant, which is the primary reason for their long-standing popularity.

There has been some research on caffeine derived from coffee plants.

With fresh coffee leaves, the following results were obtained:

In addition, here are the concentrations of endogenous caffeine, theobromine, and xanthine in buds and young, aged, and mature leaves of C. arabica.

Caffeine and catechin levels were reported to be higher in young leaves than those in mature leaves.

Coffee leaf tea made from C. eugenioides and C. racemosa produces a naturally decaffeinated beverage that may be helpful for caffeine-sensitive consumers, those who are intolerant to caffeine or want to restrict their consumption.

Can You Eat Coffee Leaves?

Yes! As a matter of fact, its infusion is consumed as a traditional food in West Sumatra, Ethiopia, Jamaica, India, Java, and South Sudan.

When the leaves are harvested, they are roasted and crumpled or crushed up before being brewed or immersed in hot water like regular tea.

The produced beverage tastes similar to green tea but contains less caffeine than both ordinary tea and coffee.

The leaves contain carbohydrates, protein and amino acids, organic acids, and a diverse variety of substances that are deemed responsible for the various potential bioactive effects: antioxidant, anti-inflammatory, antihypertensive, antibacterial, and antifungal activities.

Many assume that drinking coffee leaf tea tastes similar to coffee, however, this isn’t the case. Actually, there’s not even a hint of a coffee!

Despite the fact that it is made from coffee plant leaves, it tastes nothing like coffee.

The flavor of coffee leaf tea varies based on where and how it was cultivated.

Although the drink is sometimes compared to green tea, it is necessary to keep in mind that coffee leaf tea isn’t tea at all.

The term “tea” refers to a plant named Camellia sinensis, not a category of dried leaves soaked in hot water. This plant’s leaves are being used to make actual tea, including black tea, green tea, and white tea.

Because coffee leaves didn’t originate from this plant, a drink made with them would be considered a “tisane,” similar to rooibos or chamomile.

Hints of vanilla, honey, pipe tobacco, and rich, earthy notes may be found in coffee leaf tea. It has a significantly greater sweetness than other black teas, also lacking a tangy flavor.

It was also found that a variation of the production method (white, green, oolong, black) based on the production of tea, produced different phytochemical compositions and flavors.

Unfortunately, coffee plants including their leaves are toxic to dogs, cats, and horses.

The plant should be considered toxic because it contains saponins, triterpenic glycosides, and other undetermined irritating substances.

Saponins are irritants that can cause mild to severe skin and mouth discomfort and falcarinol, a polyacetylene terpenoid, is predominantly an irritant.

Chewing on the leaves or stems may result in swelling of the mouth and throat.

If your pet consumed a considerable amount of coffee plant leaves, gastric lavage may help empty the contents of its stomach.

How Do You Make Coffee Out Of Coffee Leaves?

Coffee leaves can’t be used to produce a cup of coffee, although they can be used to make coffee leaf tea.

Coffee, as most of us probably already know, is a brewed drink prepared using roasted coffee beans, seeds of berries from certain coffee species.

Coffee leaf tea, on the other hand, is made from coffee leaves.

Want to know how you can make one for yourself?

If you’re wondering where to get dry coffee leaves, you can buy them from Ethiopian grocery stores.

One of the nicest things about coffee leaf tea for daily consumption is that you can leave it all day without the unpleasant bitter flavor.

If you want to explore more, watch this video below.

To sum it all up, the coffee leaf is an extremely impressive resource in the food and beverage industries.

If you haven’t already, I say try coffee leaf tea!

Plus, it’s also significantly lower in caffeine, with only 1.8 mg/g per eight-ounce cup.

If you’re someone who promotes the concept of sustainability, then you would definitely love the idea of consuming coffee leaf tea.

Coffee beans may only be harvested for 3 months each year, causing farmers to constantly shift works to earn additional income. Coffee leaves, on the other hand, may be harvested all year.

Additionally, because of the markedly decreased coffee price, it may be favorable for coffee farmers and the coffee business to commercialize byproducts such as coffee leaves, which are previously mostly discarded.

Coffee leaf tea is unlikely to replace your morning cup of joe. However, it is a healthy alternative that is worth trying!

link to What is Peaberry Coffee? (Explored)

Peaberry coffee is a "flawed" bean which is a naturally occurring mutation present in robusta and arabica coffee varieties. The term "flawed" is used because only one bean develops inside the...

Continue Reading
link to What is a Pour Over Coffee? (Made Clear)