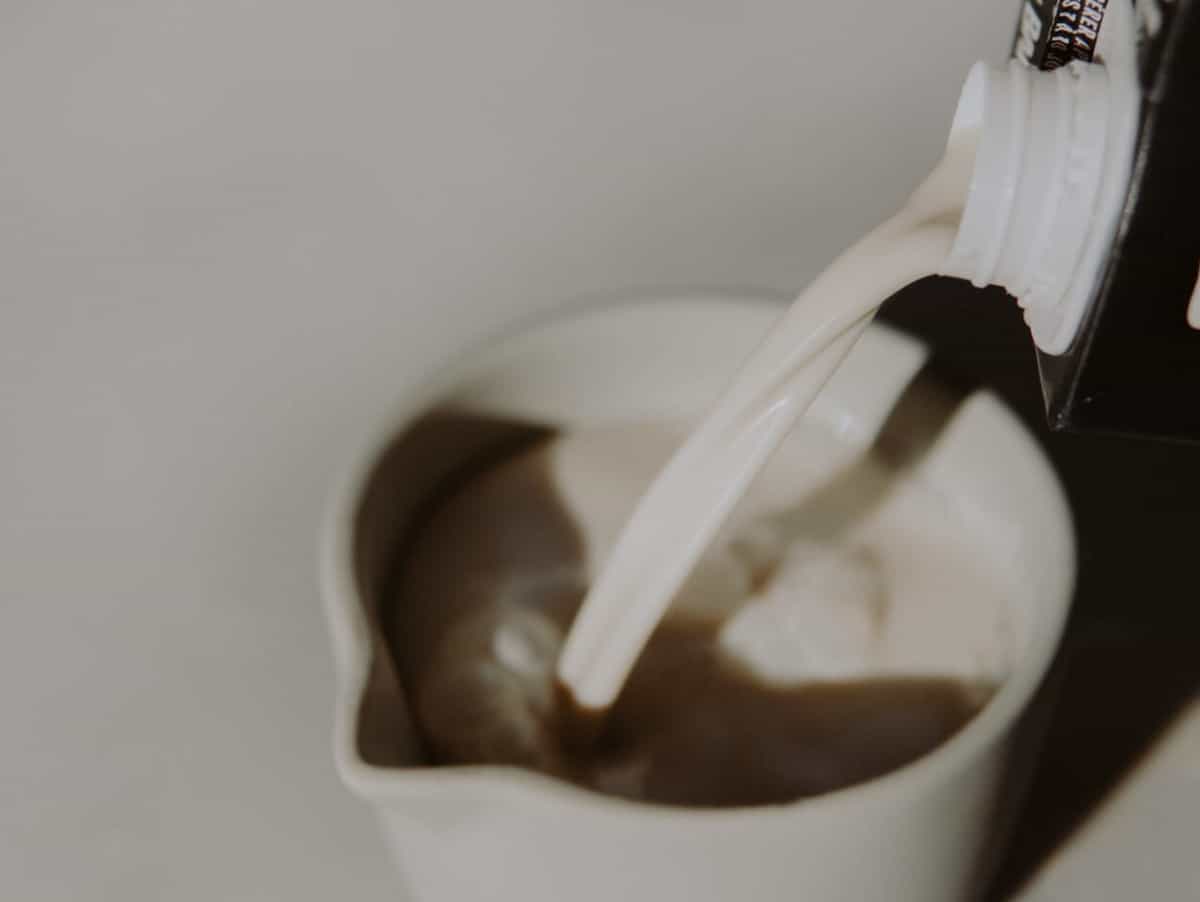 A steaming cup of coffee is the first necessity for millions of people worldwide. One of the most important reasons why people drink coffee is the caffeine content.

Caffeine helps in getting people more energized and enhances mental alertness. There’re also many chemicals and antioxidants in the drink that helps the body to relax and aids in the mental stimulus.

Nowadays, there’re fusions in the varieties of coffee sold and coffee milk is one of them.

It’s a simple drink made from milk and coffee extract and has the same unique combination of essential nutrients. However, have you wondered, whether the flavored drink contains caffeine or not?

Short answer: Coffee flavored milk contains caffeine as it’s prepared from the mixture between coffee extract and milk. The caffeine content depends on the extracted base that has been used in the drink.

If you want a more detailed review, continue your reading through the following sections.

What is Coffee Milk?

Coffee milk is a drink made by mixing the coffee syrup or extract with that of milk. The texture is similar to that of chocolate milk.

It’s considered to be the official state drink of Rhode Island. So yes, it’s extremely popular.

The taste of coffee milk is naturally like that of melted ice cream in coffee flavor. As it’s just milk flavored with coffee syrup, it’s naturally similar to that of other milk flavors like strawberry, chocolate, banana, etc.

The recipe for the drink is pretty simple and widely found online.

How Much Caffeine Does Coffee Milk Have?

Coffee milk does contain traces of caffeine. Some varieties may contain a relatively higher dose of caffeine between 120-130 milligrams.

The caffeine generally comes from the coffee extract that’s added to the fructose syrup.

If you go back a little, you’ll find that various coffee milk recipes date back to the 19th century, and still the traditional method of preparing coffee milk is followed.

Since the 1930s, diners and drugstores have been using the leftover grounds of coffee with sugar and milk to get a new drink. Gradually, the coffee proportion became lesser and more milk and sugar were added.

The drink is particularly a favorite among the youngsters. As per this review, the caffeine content may vary among the coffee flavors. This report showed that among the products with high caffeine content, coffee-flavored milk was one of them.

One of the coffee-flavored milk mentioned in the report contained 133 milligrams per serving of the drink, that’s higher than some regular coffee and energy drinks.

Since the caffeine content is sometimes beyond the recommended healthy dose for young people, one should watch for the daily intake.

As per the US Food and Drug Administration, the healthy recommended caffeine content is 400 mg a day.

For teenagers and adolescents, caffeine is generally not a recommended energy booster. However, if you’re allowed to have some, try to keep the intake within 50-100 milligrams of caffeine.

Remember that overdosage of caffeine will allow unwanted health concerns to affect your body.

Some of the most widely experienced side effects of caffeine are:

Does Korean Coffee Milk Have Caffeine?

Korean coffee milk can contain a caffeine content of 100 – 125 mg per serving. Coffee milk in Korean is called keopiuyu.

It’s coffee-infused milk and contains a significant amount of caffeine.

According to various websites, the nutrition facts in a single container of Seoul Milk, Korean Coffee Milk is given below:

Coffee-flavored milk products may contain more or less caffeine content than coffee products as reported in a health review by Seoul city.

The Korean Coffee milk available in the market contains 100-125 milligrams of caffeine per serving.

The caffeine boost is perfect for a long day ahead. However, it is also beyond recommended daily allowance of caffeine for youths. I feel for younger people, a boost of 50-100 milligrams of caffeine is sufficient.

Black coffee is considered to be one of the healthiest forms of natural caffeine providing the body with an energy boost, and loads of antioxidants, promoting weight loss and reducing fatigue.

However, if you’re having the drink on regular basis, it may disrupt your caffeine tolerance and inhibit the absorption of essential nutrients in your body.

On the other hand, adding milk to the coffee or having coffee-flavored milk helps you with:

Remember, adding coffee with milk and coffee milk might sound similar but there’s still a difference in the content’s proportion. When you’re adding milk to your coffee, you’re just enhancing the taste of the drink. If you’re having coffee milk then you’re having a type of milk that is coffee flavored.

Why You Should Try Coffee Milk?

Well, if you’re wondering why you should prefer trying out the coffee milk, then the answers are simple.

First of all, it’s tasty. I am personally fond of flavored milk. Coffee milk gives a smooth and rich texture just like chocolate milk so it’s an appetizing treat for the taste bud.

Secondly, you have to put with the least hassle for preparing the drink. Unlike brewing regular coffee, there’s no need for a coffee maker. Even beans aren’t necessary. You can just add coffee syrup or extract as per your convenience.

Last, of all, it’s delicious so why not try it, giving a break to your regular brewed coffee.

Coffee milk can be healthy in moderation. Dairy is considered an excellent source of calcium that reduces the risk of osteoporosis and bone fractures.

Coffee is known to reduce calcium, you can read about it here if you’d like to know more, so having it as your regular go-to wake-up juice can be a problem. But that can be offset with the addition of milk, with coffee milk, you won’t need to add milk since it’s already part of the ingredient, along with the caffeine you need to wake you up.

However, whether a drink is healthy or no, is relative depending on the metabolism of the body.

Moreover, no matter which flavor is added to the milk, it contains all the nutrients and health benefits of plain milk. Although the presence of coffee syrup or extract may bother you, remember it’s just a drink. No matter how nutritious a drink is you need to intake it within the limit.

Drinking coffee milk may help in increasing the intake of the dairy food group and simultaneously, increase the lactose in the body. This may aid in gaining bodyweight.

Also, flavored milk can’t be considered to be the nutritional equivalent of unflavored ones. This is because the flavored one is significantly higher in sugar, calories, and sodium.

This calls for moderate consumption of the beverage. Especially for kids, the quantity of the drink should be checked off so that adverse effects can be avoided.

If the coffee extract contains a large dose of caffeine, it would multiply the effects on the body for people with low caffeine sensitivity.

What’s the Dissimilarity Between Coffee Milk and Other Coffee Varieties?

There aren’t any distinctive features between the two since the base ingredients are almost the same. However, coffee milk is a very simple drink compared to coffee varieties such as cortado, long macchiato, affogato, or flat white.

Coffee milk increases the intake of dairy food groups more than the other varieties of coffee. This regards the fact that those who drink coffee-flavored milk are more likely to meet their need for key nutrients such as calcium and vitamin A rapidly compared to those who don’t include milk in their drink.

Coffee milk also doesn’t have whipped cream like frappes or frappuccino. However, coffee milk isn’t better in this sense since it contains sugar and additives as well.

The coffee milk can be sold as a pasteurized, refrigerated product, unlike some coffee varieties.

If you’re drinking coffee for the caffeine boost, all coffee milk might not serve the best purpose since some containers may contain a relatively low caffeine base.

What Are Some of The Caffeine Free Alternatives For Coffee Milk?

By any chance, if you’re bored of the regular brewed coffee or coffee-flavored milk, there are great alternatives to lighten your mood. These include:

For some people, high caffeine dose may be lethal causing digestive and hormonal issues. There’re plenty of options if you’re bored with the coffee-flavored milk and looking for a healthier alternative.

Most of these contain low caffeine content and almost zero sugar, unlike coffee-flavored milk.

In conclusion, coffee-flavored milk contains caffeine. Many people can’t tolerate the intense caffeine after-taste. For them, adding the coffee extract with the milk can serve a good purpose.

With the drink, they’re consuming milk and coffee at the same time, obtaining important nutrients from both. Since such drinks are popular among the younger generation, their intake should be regulated.

Caffeinated drinks are good for health only when consumed in moderation. So look for healthier alternatives for refreshments and don’t get addicted to them.