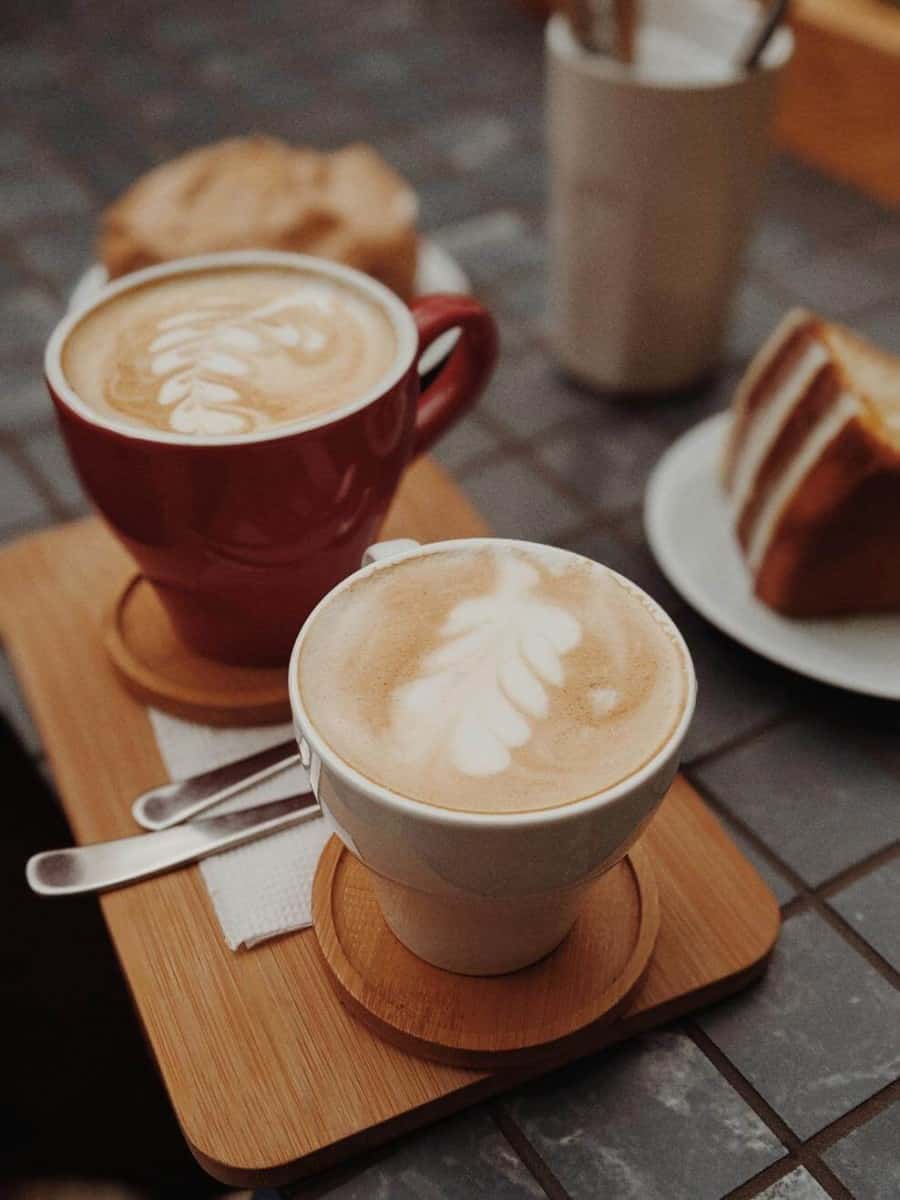 Cappuccino and latte are two very popular espresso-based drinks. Both are popular all over the world because of their distinct taste and Instagram-worthy appearance.

Both drinks contain espresso and two additional ingredients: steamed milk and foamed milk. Additionally, the caffeine content in both drinks is similar (around 154 mg) because both of them use an equal amount of espresso.

Now, before I differentiate the two drinks from one another, let’s first take a look and know about them individually.

What is in a Cappuccino?

A cappuccino is about 6 oz. in volume and is usually made with one shot of espresso, steamed milk, and milk foam.

So proportionally, it has a ratio of one-third espresso, one-third steamed milk, and one-third milk foam. Also, it’s smaller than a café latte.

The preparation of a cappuccino starts with a base of a shot of espresso. The second layer of steamed milk is added on top, followed by a layer of milk foam to give the drink a velvety texture.

What is in a Latte?

A latte begins with the same base: a single shot of espresso. Several ounces of steamed milk is then combined with the espresso to create a rich, creamy drink that has a more subtle taste. The typical ratio for espresso to steamed milk is about 1-to-2. The latte is then topped with a textured, thin layer of milk foam.

The exact preparation of a latte varies significantly around the world. With an extensive increase in its popularity in the last 20 years, it has undergone many experiments worldwide and is often made sweeter by adding flavors like honey, vanilla, and hazelnut.

Now that you know a little more about both drinks, let’s dig deeper into their differences.

What’s the Difference Between a Cappuccino and a Latte?

The key differences between a cappuccino and a latte are:

A latte contains more steamed milk than a cappuccino. Around 2/3 of the drink is steamed milk with a small layer (around 1 cm) of frothed milk at the top.

Size of the Drink

A cappuccino is distinctly layered and has a thicker milk foam at the top, whereas when preparing a latte, the espresso and steamed milk are blended well together, keeping a thin layer of foam at the top.

I’ve summarized the differences between both drinks in the table below:

Watch the video below to have a better understanding of how to differentiate a cappuccino from a latte.

Which Is Stronger: Cappuccino or Latte?

The milk added in a latte gives it a sweeter and more subtle taste, thereby reducing its perceived strength as well.

Both drinks contain the same shot of espresso and thus have the same amount of caffeine.

However, adding an extra shot of espresso to either one can make them stronger.

Between a Cappuccino and a Latter, Which is Healthier?

A cappuccino is healthier than a latte. A cappuccino has fewer calories and less fat compared to a latte.

A study reveals that drinking a cup of cappuccino having around 180 ml of the drink a day can significantly prevent the oxidization of bad cholesterol and prevent heart-related diseases.

That’s not to say lattes are unhealthy, though, as long as you keep your intake moderate.

The nutrient content of both of the drinks is further influenced by the type of milk used in preparing them and if any sugar or sweeteners are added.

If you are fond of these drinks, especially lattes, I recommend you use non-fat milk or alternative kinds of milk like almond, coconut, or oat milk which are comparatively healthier options.

Let’s compare the nutrition value of each drink.

Is Latte More Fattening Than Cappuccino?

Yes, a latte is considered to be more fattening than a cappuccino. Lattes consist more of milk than coffee, therefore they have more nutrients that could affect your weight than cappuccinos.

However, the actual calories in a cup of each drink will vary depending on serving size, the fat content of milk, and ingredient proportions used in preparation.

As a point of reference, a 16-ounce glass of latte from Starbucks has 190 calories compared to 120 calories for the same serving size of a cappuccino.

Which Has More Caffeine: Latte or Cappuccino?

Both drinks have the same amount of caffeine in them, which is typically 154mg. This is because they are made using shots of espresso, and a shot of espresso contains a caffeine content of 77mg.

If you were to use one shot of espresso for each drink, then both drinks will contain the same amount of caffeine. However, if you were to add more to the other, then that drink would be considerably higher in caffeine amount.

People typically add two shots to either drink, which would be 154mg of caffeine. But you can add up to three shots and go for 231mg.

231mg is below the advised daily limit set by the FDA, but it is still reasonably high, especially for caffeine-sensitive people.

You should be wary in the amount of caffeine you ingest as overdosing on coffee can cause adverse effects like:

You can read more about the side effects of too much coffee in this article I wrote if you’re interested.

Cappuccinos and lattes are both espresso-based coffee variants that have become immensely popular in recent years. Although their basic ingredients are similar, the proportions and preparation details make each drink different from the other.

The process of making each drink starts with base espresso shots in the same serving size. Of course, their following steps differ greatly from each other.

The latte is prepared by adding several ounces of steamed milk to the espresso shot while the milk proportion in a cappuccino is kept to around 1/3 of the drink.

The final step, being the most creative one, is of setting milk foam at the top of the drink.

A latte has a thin layer of milk foam at the top, while a cappuccino is left with a thick foam to give a rich mouthfeel to the drink.

The caffeine content in both drinks is the same due to the equal quantity of espresso shots used in the preparation of each. However, a cappuccino tends to be stronger in flavor than a latte because the higher quantity of steamed milk in the latter softens its taste.

According to some studies, a cappuccino tends to be healthier than a latte. This is because higher milk content in a latte makes the drink higher in calories, fat, and protein as well.

Both cappuccinos and lattes have something great to offer, so it would still be up to you about which drink you’d rather have.

Hopefully, the information in this article is enough to let you know what to expect for both drinks. I suggest you try both and decide from there!

link to Coffee VS Red Bull (Compare and Contrast)

In brief, Red Bull and coffee are both loaded with caffeine that gives you energy expected to last for a few hours. Caffeine, the world's most used stimulant, is the element that boosts energy,...

Continue Reading
link to Coffee VS Espresso (Which is Better?)

Short Explanation: The main difference between coffee and espresso is the way they're prepared. Coffee is enjoyed by more than 80% of the adult population in the United States as if it's the...