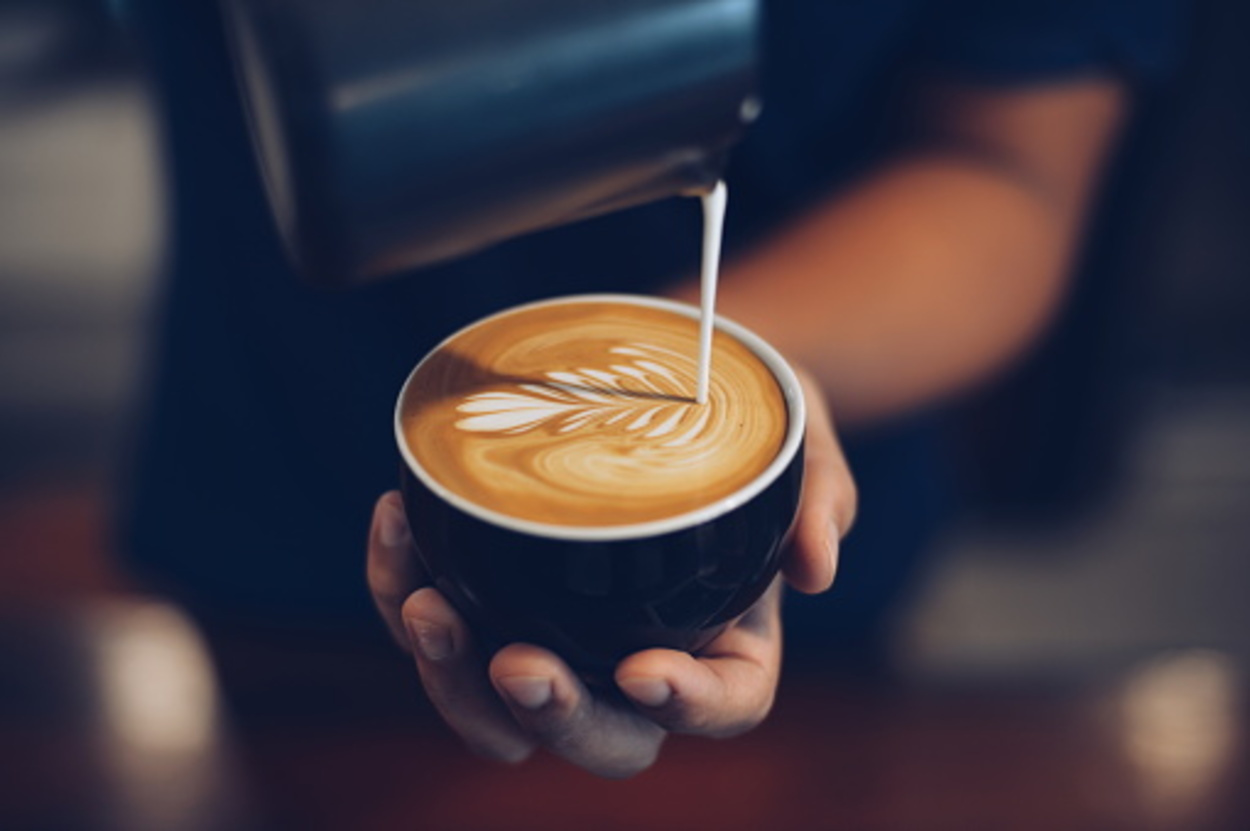 Cappuccino and Flat white both, are made using the base of an espresso. They are one of the most demanding coffees around the world.

But what makes them different?

Well, the difference lies in their composition, taste, smell, and nutrition.

Cappuccinos have a creamy flavor and they’re made with 1/3 espresso, 1/3 steamed milk, and 1/3 frothed milk or microfoam.

Flat White, on the other hand, has an espresso base with as little foam as possible. They are made with 1/3 espresso and 2/3 steamed milk (ideally with a microfoam layer)

Read the article to find out more!

A cappuccino is one of the most common types of coffee which has a standard ratio of 1/3 espresso, 1/3 steamed milk, and 1/3 frothed milk or microfoam.

This ratio balances the strong flavor of coffee and gives off a rich creamier flavor as compared to flat white.

Cappuccinos were introduced as the ‘Kapuziner’ in Viennese coffee houses in the 1700s. It was named so because the beverage had a brown color similar to the robes worn by the Capuchin (‘Kapuzin’) friars in Vienna. The actual cappuccino originated in Italy in the early 1900s when the espresso machine gained its popularity in 1901.

A cappuccino has a few variations, such as Iced cappuccino, cappuccino Freddo are cold versions of Hot cappuccino. It can also be made with cream or non-dairy milk substitutes.

You can read more about cappuccino in my other article where I have talked about this coffee in great detail.

What Is Flat White?

Flat whites have an espresso base with as little foam as possible. Hence the name is flat white.

Flat whites are usually served in smaller cups than cappuccinos, they have a strong smell of coffee and a bold taste too.

So when you order a flat white, keep in mind that you won’t be getting any froth.

Flat White has a complicated history many say it originated in Australia, whereas there’s a whole debate about how it has originated from New Zealand.

Fraser Mclnnes of Wellington, Australia made a cappuccino with low-fat milk and refused to froth, this failed attempt at cappuccino was termed as Flat White in the 1980s.

You can read more about flat white in my other article where I talk about this coffee in detail.

Here is a comparison of nutritional values that cappuccino and flat white serves you with:

Here you can see the difference between the nutritional values of Cappuccino and Flat white because of the difference in the quantity that they are served in.

Both of them have a little difference in their nutritional value but have the same amount of caffeine due to one shot of espresso.

Now let’s look into the caffeine content of Cappuccino and Flat White.

Both Cappuccino and flat white have an equal amount of caffeine which is 63 mg per serving, this is due to one shot of espresso that is used in its formulation.

However, if you opt for two shots of espresso you will be getting 128 mg of caffeine per serving.

This amount of caffeine is enough to give you a boost for mechanism and give you the energy to perform better.

Also, keep in mind that the FDA has recommended a daily dose for healthy individuals not to be more than 400mg per day.

This means you can have about two cups of coffee every day. I would suggest you take a look at your caffeine intake so that you don’t overdose which can cause side effects such as:

To avoid the above side effects you should stay put with your nutritional values and cut down on your caffeine if you notice you’re caffeine sensitive.

Caffeine also has some benefits. It stimulates the central nervous system and blocks off the adenosine receptors.

This way you’re able to concentrate and focus on your work for a long time.

How Does Cappuccino Differ From Flat White?

Cappuccino and Flat white both use an espresso base in their formulation, however, cappuccino uses a 1/3 ratio of steamed milk and 1/3 frothed milk.

Whereas, Flat White uses an espresso base and is topped with micro foamed milk which has a velvety texture.

Cappuccino and Flat white have one thing common in history, which is Flat white was a failed attempt at cappuccino but it was somehow popularized.

Cappuccinos are considered creamier and richer in taste due to the steamed and foamed milk, the steamed milk balances the strong taste of coffee and gives off a rich smell.

Do Cappuccinos Give You Energy?

Yes! Cappuccino does give you energy.

Supplement-wise, these are great quantities, and the amount of caffeine is good enough to give you a quick long-lasting boost to get through the day.

If your diet is not rich in nutrition you may opt for a cappuccino every day.

The calories determine the energy you will be getting from the food, 165 calories per serving is a good amount to help you with more stamina and concentration.

Can You Drink Flat White Every Day?

Yes! You can drink a flat white every day.

Flat whites have a good amount of caffeine to give you energy, it can give you a boost and increase your concentration.

Flat white can also be considered healthy due to the potassium, sodium, and vitamins added to it. So if you don’t have a diet rich in nutrition, this might help.

However, you should keep in mind that there are some limits set by the FDA, so you can avoid the side effects of overdosing which can be a big health hazard. Also, a 6oz of Flat white contains 83.6 calories. So you might want to look into it if you’re on a strict diet or trying to lose weight.

You can learn about the effects of drinking too much coffee on your body in the video below.

This depends on your personal taste. Cappuccinos have a rich creamier taste as compared to Flat whites.

This is due to the addition of steamed milk and frothed milk which sits on the top that subsides the strong taste of coffee.

If you’re someone who prefers a bold, strong coffee with a light fragrance of milk, Flat whites would do the work.

However, Cappuccinos might taste better to some because they prefer creamy and soft smell coffees.

Are Cappuccinos Healthier than Flat whites?

In my opinion, both of the drinks are healthy until consumed in moderation.

Cappuccinos might contain a whole lot more calories than Flat white which can be beneficial if you’re looking for extra energy through these drinks.

Both of the drinks have a good amount of supplements added and can be opted with one or two shots of espresso as well.

Cappuccinos and Flat Whites are the two most popular drinks in America.

Flat whites were a failed attempt at Cappuccino for the customers who wanted less milk.

Cappuccino and flat whites have the same amount of caffeine, this is if you chose one or two shots of espresso for both of them since a single shot of espresso contains 63mg of caffeine.

However, the difference lies in their calories, cappuccinos tend to have more calories due to the addition of steamed milk and frothed milk.

They also differ in terms of smell as the steamed milk helps ease down the strong effect of coffee in Cappuccino whereas in Flat white you can sense a bold flavor of the coffee.

With this, I hope you’re well aware of how Cappuccinos and Flat Whites differ.

Coffee is not only sorted into categories such as dark roast and light roast but if you're familiar with specialty coffee, you might have heard about direct trade and fair trade. However, many...