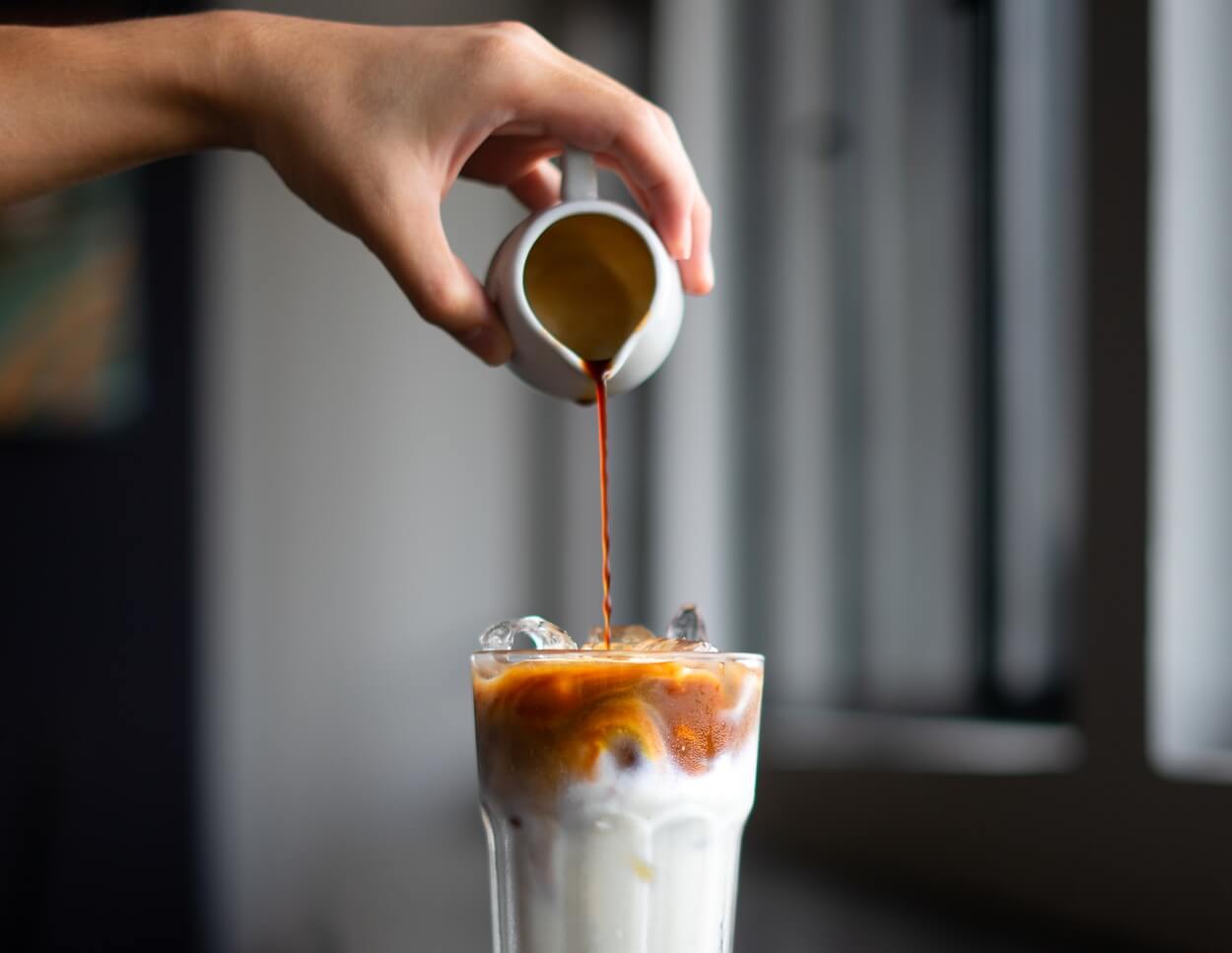 Milk and coffee are undoubtedly two of the most widely consumed and loved fluids that are a source of nutrition, and energy.

Nowadays, wide varieties of flavorings and additives are found in the super shops to take your milk with and coffee extracts or syrups are one of the most popular.

Adding milk to your coffee is different from this since the caffeine content and preparation method vary in both drinks. If you’re adding coffee to the milk then you’re having milk with coffee flavor infused in it.

If you don’t feel any side effects of caffeine from the added coffee in your milk, you can add it for getting a variation in the taste sometimes.

Short answer: You can add coffee to your milk and produce a light caffeinated shake similar to chocolate milk or strawberry milk.

If you’re wondering how does this mixture work, then go through the following sections for better understanding.

Can You Add Instant Coffee Powder To Hot Milk?

You can add instant coffee powder to hot milk. This works just the same as regular cocoa powder or any sort of flavored powder that you add to your milk.

Milk is mostly water and the instant coffee powder will dissolve fine in the liquid.

If you’re considering it based on texture, then flavor-wise the drink may taste a little weak compared to regular coffee beverages.

One of the coffee varieties, a latte, is milk and coffee so you are most likely to get a similar taste in between except for the rich consistency of the brewing coffee.

The result of adding instant coffee powder is similar to adding chocolate powder. The taste is somewhat like coffee milk but not coffee.

If you want to taste the milk like a strong coffee, you may need to pour 2-4 teaspoons of coffee powder to get the desired taste. Otherwise, for a sufficiently less amount of coffee powder, the milk just turns into a caffeinated shake.

How Does Coffee Affect the Contents of Milk?

Coffee will not decrease the availability of protein and other nutrition in the milk. However, since it contains caffeine, the stimulant may reduce the absorption of important nutrients.

The coffee powder or syrup that you may add to your milk dissolves just fine as water. This usually turns out to be the milk flavored with coffee just like chocolate made, strawberry milk, and banana milk.

Coffee syrups are a very common additive for milk these days. The syrups are often added with milk like chocolate milk. This coffee milk is the official state drink of Rhode Island.

No matter which flavor is added to the milk, it usually contains all the nutrients of plain milk. However, you need o limit the intake to a healthy quantity since the caffeine in the syrup or extract may bother you.

Honestly speaking, adding flavorings or syrups sparks the taste level but doesn’t add any important nutrient mark other than the ones already in the milk.

Can You Brew Coffee In Milk?

Milk is the most common addition to coffee drinks and you can supposedly brew your coffee with milk instead of water. Milk brewed coffee tastes the same as coffee with milk.

Milk is often used in preparing coffee drinks to lessen the bitterness of the grounds and to add a more creamy texture.

For people suffering from acidity, adding milk in the brewing process may help in tackling gastrointestinal complications. The fats and sugar in milk help in balancing the bitterness and acidity of the coffee beans used in the preparation.

Thus, when you brew the coffee in milk the drink produced gives a smoother texture and is gentler on upset or sensitive stomachs.

Also, if you’re thinking of replacing the warm water with milk for preparing your coffee in the coffee maker, you got to be cautious about the temperature of brewing it. Milk burns easily compared to water and to prepare the coffee without damage, you need to have expert hands in controlling the maker.

However, it’s not always advisable to brew coffee with milk. The milk prevents the coffee grounds to expose the full flavor and aroma from diffusing. The fats in milk are responsible for making a much less strong cup of coffee and can also cause issues like curdling milk.

You can read my other article to get a better understanding of how milk affects coffee.

For avoiding unwanted concerns, it’s better to slowly warm the milk and then use a french press.

Is There Any Easy Way to Brew Coffee with Milk?

There are various ways in which you could brew coffee with milk. Though the taste of the simpler method might not be appealing for the coffee enthusiasts, it’s easier than using other processes involving fresh grounds or french press.

You can add instant coffee to brew your drink with milk.

You need to heat the right amount of milk at the right temperature in a mug or cup. If you set the temperature right, you can control both the flavor and the caffeine content by measuring it out. In the case of decaf coffee, you don’t need to worry about the caffeine effects.

Of course, this drink won’t taste similar to the one prepared from fresh coffee grounds. However, this shouldn’t be that much of an issue once in a while.

Either way, this shouldn’t be something to worry about since you can alternate your days with the fresh coffee grounds and instant coffee powder simultaneously.

Is Coffee Milk a Thing?

Coffee milk is a milk beverage that is prepared by mixing coffee extracts or syrup with the milk.

It’s extremely popular if you don’t know about it yet. The taste of coffee milk is like that of melted coffee and vanilla ice cream mixture.

There are plenty of recipes online that you can follow.

Coffee milk is indeed a rich and tasty source of nutrients. You’re getting all the important elements of milk plus the extra effects of the antioxidants from the coffee.

However, no matter how nutritious it sounds, it still got caffeine in it. Caffeine in coffee is known to reduce calcium, iron and you’d don’t like to go for it as a wake-up juice every day.

Many people may not like the intense flavor of coffee, so adding a few extracts or syrup to the milk can serve a good purpose by enhancing the taste of the milk and getting a mild energy fix as well.

Just how the coffee milk may look tasty, continuously drinking it may increase the lactose in your body. This aids in gaining bodyweight.

This calls for moderation in adding coffee to the milk, especially for kids and teenagers. Their bodies are more receptive to the caffeine content so don’t put too much of the stimulant in their milk.

What Will Adding Coffee To Milk Do?

Adding coffee to the milk will give you a different appetizing flavor and you might like it initially because of its rich taste. However, flavored milk can’t be considered the nutritional equivalent to unflavored ones.

The bottled flavor milk found in shops tends to be significantly high in sugar, calories, and sodium.

Milk is a staple daily fluid for millions of people especially children and teenagers. Adding the caffeinated content to their milk may tend to disrupt their growing cardiovascular and neurological system.

Moreover, the caffeine in the coffee may inhibit the absorption of calcium from the milk in your bloodstream.

Milk is one of the most convenient sources of calcium for your body. Caffeine is a natural diuretic and it causes your body to urinate more. As a result, your body starts to excrete more calcium.

Let’s have a look at the table of content for the milk:

The amount of excreted calcium is however not significant but it’s still a matter to take count of for daily life.

So, add coffee to milk only when you’re willing to have a variety in taste and just for a little boost of energy. Don’t go overboard with the coffee powder or syrup and stick to unflavored milk for regular consumption.

Does Adding Coffee with Milk Depletes the Caffeine?

No. Adding coffee to the milk doesn’t make any difference to the existing caffeine count of the added coffee powder or syrup. The only effect that the coffee does to the milk, is adding a few nutritional benefits and giving a better mild energy boost.

Adding coffee with the milk may help in neutralizing the acids in the coffee. If you’re having an upset stomach, you might not be able to drink coffee in its strong form.

To get the taste of the drink, you can just add a small spoonful of its powder or syrup to your milk. This isn’t likely to stain your teeth as well unlike regular coffee consumption.

Moreover, the milk may outweigh the nutrients inhibited by coffee so you might experience better tolerance and absorption.

Many people add milk to their coffee as well. The scenario is just reverse here but the overall outcome is almost similar. Though black coffee is considered to be the healthiest form of daily caffeinated dose, adding milk to the drink might help deal with stomach issues.

So, adding a moderate quantity of coffee with the milk can benefit you with:

Moreover, people are also sensitive to caffeine content. So everyone can’t drink strong coffees for a quick caffeinated boost.

In this case, you can simply put a small amount of coffee powder or syrup just like cocoa powder and enhance the taste of the milk, without altering the nutritional benefits significantly.

Remember, coffee contains caffeine so you can’t pour any amount you want into your drink. Limit the additives to a certain healthy amount for skipping the adverse side effects.

Most importantly, consume milk with coffee as a mild caffeinated shake. Don’t expect the drink to work as a strong cup of coffee.

Apart from some small drawbacks, you can add coffee to the milk without worrying. This would add a fresh touch of appealing flavor to your regular plain milk.