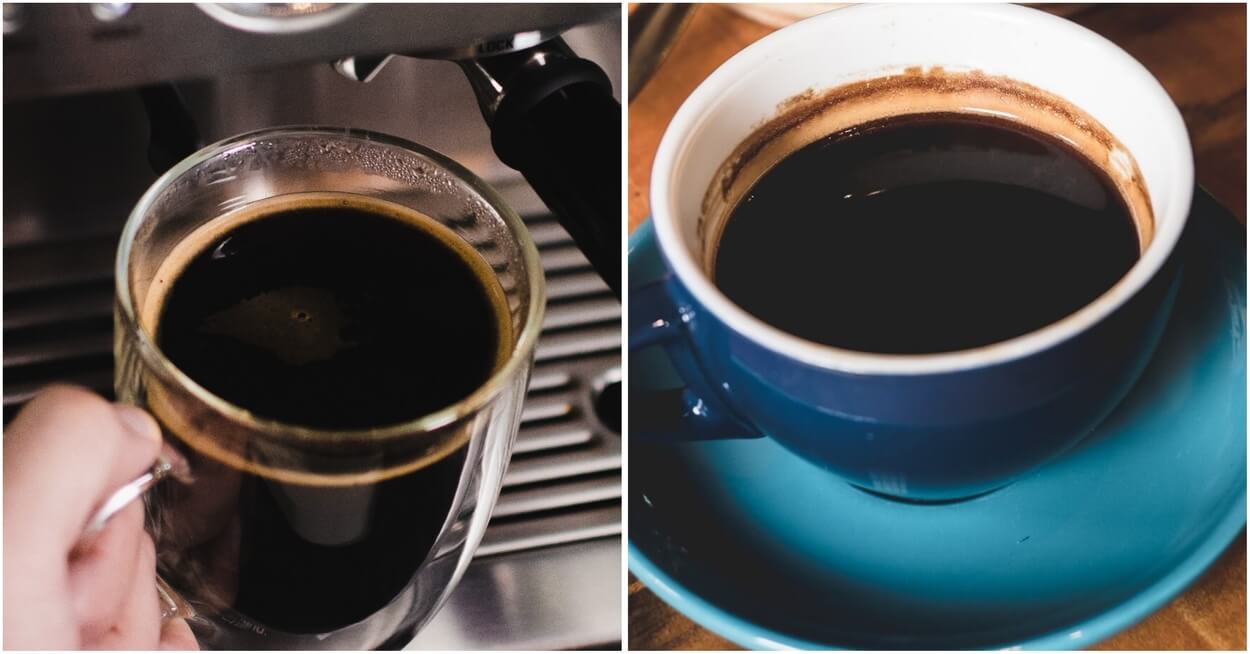 If you are someone new to the coffee culture, you might find Caffe Americano and Long Black the same variety.

Both the drinks are forms of black coffee, neither containing milk nor sugar. They look almost identical and show apparent similarities.

However, even with a similar appearance, both drinks have distinct mouthfeels due to differences in the preparation method.

Short answer: The main distinguishing feature of an Americano and a long black comes from the differences in the preparation method. Apart from this, both the drinks have similar attributes since both of these are black coffees.

The instant energy boost from both the drinks is amazing and the effects are almost similar. Yes, there might be some differential taste among the drinks.

Let’s dig deeper into the topic and find some more explanations!

What are the Differences Between the Preparation Method of Americano and Long Black?

Both of the drinks are espresso-based and rich in flavor. They are very similar with one major distinguishing feature.

The main difference between the two coffee drinks lies in the method of pouring ingredients.

Both of the drinks contain two major ingredients which are water and espresso shots.

In the case of Americano, the espresso is poured into the cup first and then warm water is poured over that espresso base.

On the other hand, a long black is made by pouring warm water at first and then adding espresso into it. You can read the basic gist of a long black coffee on this other article I wrote, but in short, a long black is generally stronger and fuller in taste compared to Americano.

Thus, even if the two espresso-based drinks are quite similar, they’re made with different techniques and give a different taste.

Which Drink Has More Caffeine?

Americano is espresso with water added and on the other hand, long black is water with espresso added. This is why long black is much richer and fuller in taste.

However, since the ingredients involved in the preparation of both the drinks are similar, if they are prepared from the same base, they might have similar caffeine content.

For example, if a ristretto base is used in the long black drink instead of an espresso base, then the drink may have less caffeine. This is because ristretto shots are lower in caffeine compared to espresso.

A 20 ml ristretto is supposedly consisted of about 33 milligrams of caffeine whereas a 30 ml espresso has about 63 milligrams.

In most cases, long black holds more caffeine content but remember that the caffeine quantity mainly depends on the contributing factors like:

Is Americano Stronger than Long Black?

Usually, the caffeine content in long black is more than Americano since more espresso shots are involved. This makes the long black stronger than americano.

However, remember that a strong-tasting coffee doesn’t always have to have more caffeine. In many cases, you may see coffee varieties with more content being lesser in strength compared to others.

It all comes down to how you prepare your cup of brew.

The first thing that should be considered is the type of roast used. Light roast is stronger in flavor though it has almost the same caffeine content as the dark roasted one. Also, by strong if you mean the flavor then the type of beans involved plays a more important role in determining the strength of the drink.

For example, Arabica beans yield a more strong flavor but have less caffeine than robusta.

Again, by strong, if you mean the ratio of using higher grounds to water then the answer will be yes. Coffee that has more grounds is stronger than coffee with fewer grounds.

This makes long black stronger as it involves more espresso shots. However, if ristretto is used as the base, the caffeine content may significantly be decreased so the strength that we’re talking about here may also vary.

Which is Healthier for Long Run?

Honestly speaking, both the drinks are quite healthy considering the nutrients present in the drinks.

Coffee naturally is a very healthy choice of energy fix. It not only boosts energy but also provides ample antioxidants, minerals, and vitamins to your body. The caffeine in the espresso base used helps in maintaining good memory and protects from chronic diseases such as type 2 diabetes and Alzheimer’s.

Considering the caffeine content, both the drinks have moderate counts as well. Long black has a slightly more caffeine count as it contains more espresso shots than Americano. However, if you’re consuming within your tolerance level it will rarely harm you.

There aren’t alarming side-effects of the drinks overviewing their nutritional information. Nurturing the regular habit of having black coffee like these two may enhance the health benefits.

Is There Any Difference in the Taste?

There exist a slight difference between the taste of the two drinks.

Long black usually have a stronger and fuller taste. Maybe because more espresso base is involved as you know more coffee grounds mean more flavor.

Since both of these are black coffee, they have that earthy-bold flavor with a distinct texture and delicate aroma. Americano may taste a little milder than a long black when served right.

Also, the bold flavor may come from the types of beans used. How the drinks are served, prepared and the flavor profile plays contributing roles in determining the exact taste of the drinks.

Which Has More Calories?

You are in luck if you’re binging on these black coffee varieties. Americano and Long black are the lowest-calorie coffee drink that you can choose.

As per the daily calorie intake guide, none of these drinks is likely to dent your daily calorie chart. The few calories present in the drink are all coming from the coffee shots used. This means both the drinks may have a similar amount of calories when the same number of shots are used.

If your long black has two espresso shots, then it’s likely to have more calories compared to a single shot of espresso in Americano. There are eventually some fluctuations in calories between the shots used in different brands and shops.

Also, the calorie content may differ among different sizes. Generally, long black contains 4 calories per serve whereas Americano got 15 calories.

However, the coffee drinks may contain a lot of calories if they are purchased from some chain shops where lots of additives are included.

Let’s have a look at the calorie content for some other black coffee varieties:

Can You Use Ristretto for Both the Drinks?

Yes, you can use ristretto for preparing both drinks.

Even with a distinct fine line with the preparation method, both the coffee drinks have similar characteristics.

Since both the drinks contain espresso bases, these can be swapped for a ristretto. The ristretto makes the drinks stronger and less bitter.

However, the strong taste of ristretto doesn’t coincide with higher caffeine. It has lower caffeine content compared to an espresso base.

Pros and Cons of Each Drink

Each caffeinated drink has there fair share of pros and cons. Although they are a good source of energy boost, consuming over the recommended quantity doesn’t necessarily input greater benefits.

I have studied through several reviews and here I’ll be summing some of the important things to know about the drinks. Since both the drink are the modern version of black coffee, these contain similar pros and cons.

Pros of Americano and Long Black

Cons of Americano and Long Black

The Final Answer: Which One Should You Choose?

Both the drinks are espresso-based and are traditionally made completely black.

There isn’t much distinguished about the drinks as they have several similar features. The main difference occurs from the method of preparation and all that comes down to your preference.

Since they are prepared differently, you will find the results slightly different in terms of taste and flavor.

If you are an avid black coffee lover, then both drinks might be suitable for you. Americano is comparatively a little lighter than long black.

At first, try having Americano and see how the taste affects you. If you like the way Americano tastes, you can then switch to Long black. The caffeine count is slightly more for the latter so watch put your daily intake.